Spring Convocation: Introducing the class of 2022

This spring, 4,468 graduates are poised to make their mark on society in their own unique ways. Read on to learn about some of these inspiring individuals who will graduate June 7-10, or meet the newest health care professionals who graduated last month.

Congratulations to the class of 2022!

Join in the celebration in-person, or on the interactive virtual platform. 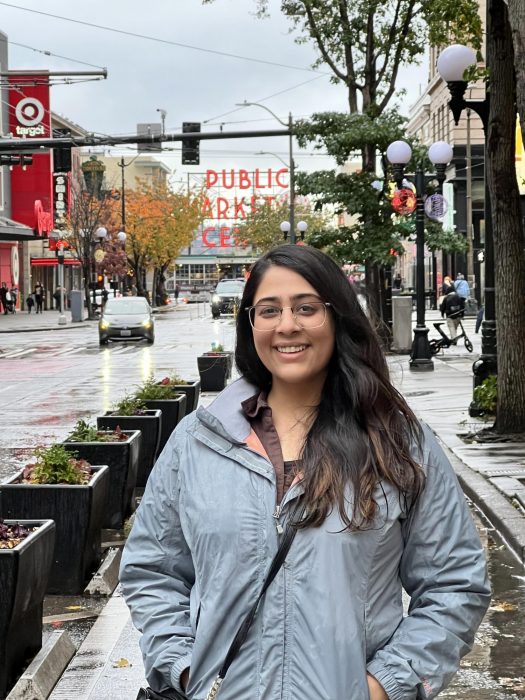 As a student at the Pakistan International School of Jeddah in Saudi Arabia, Fajr Awan’s interests revolved around science and engineering with very little exposure to business or accounting. When she moved to Canada and attended Grant Park High School in 12th grade, however, she stepped out of her comfort zone and started participating in an extra-curricular program that delved into common concepts in business.

She was immediately drawn to the field and was confident that pursuing a career in business and an education at the Asper School of Business would be the best path for her. Awan naturally gravitated towards accounting, recognizing its central role in any business. As a student, she also broke barriers as the Commerce Students’ Association’s very first Equity, Diversity and Inclusion Officer. She is graduating with a bachelor of commerce, with majors in both accounting and management information systems.

Awan plans to earn her Chartered Professional Accountant designation within public entity auditing while exploring other interests in numerous technological developments as they relate to cloud computing, artificial intelligence, data analysis and change management. As she puts it, “as a CPA, I’ll be able to pursue many different paths, and the possibilities for my career are endless.”

“Perhaps the most significant life lesson I’ve learned from university is that open-mindedness works wonders,” Awan adds, perfectly summarizing her mindset not only in career development, but even more so in creating friendships and shaping your personal beliefs and perceptions of the world. 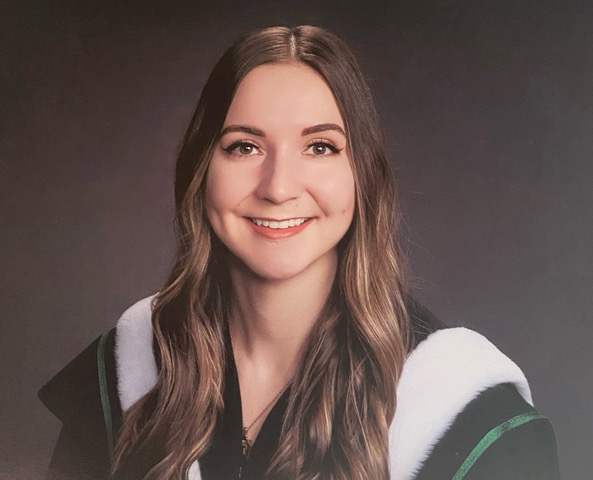 Tara Lynn Frykas has found exactly where she belongs. After earning her Legal Assistant Diploma in 2013 from Robertson College, she completed a bachelor of arts degree at UM in 2016. This year, she is graduating with a bachelor of science in human nutritional sciences from the Faculty of Agricultural and Food Sciences.

Frykas speaks openly about her personal connection to this area of study. Despite experiencing an unhealthy preoccupation with exercise, food and nutrition, this part of her life introduced her to dietetics. “Throughout my several years of studying human nutritional sciences, my relationship with food, exercise, and body image improved tremendously as I learned that health is not ‘one size fits all,’” says Frykas.

As a student, Frykas had an active role with the Nutrition Education and Community Outreach (NECO) student group, taking on multiple positions: Nutrition Month volunteer, events committee co-chair, and the Dietitians of Canada student representative. These opportunities only brought her closer to her ambitions in this field.

This summer, Frykas is working as a diet clerk in a long-term care facility where she will provide support within the field of health care. She will then transition into a dietetic internship with the Manitoba Partnership Dietetic Education Program in the fall, where she will continue her training on her path to become a registered dietitian. 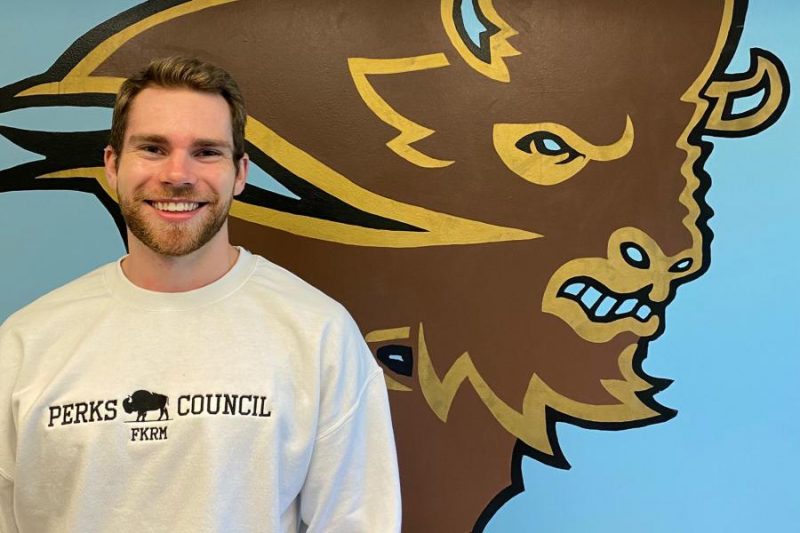 Pursuing a career in physical activity and working with youth are two factors that drew Dale Goodbrandson to the Faculty of Kinesiology and Recreation Management. He undoubtedly found the best fit for him, actively participating in the student experience and never afraid to pursue interesting opportunities.

He was a member of UM’s Kin Games team and served on the Physical Education Recreational Kinesiology Student Council (PERKS) for two years as the Phys. Ed. Rep working up to the VP Phys. Ed. Position. While completing his degree, he also worked in the spring and summer as a supervisor with the Mini U and Jr. Bisons programs. He spent the last year working full time as a program coordinator, and is now graduating with a bachelor of physical education (BPE).

He is this year’s proud recipient of the (BPE) Student of the Year Award, to top off his undergraduate experience before moving forward. Goodbrandson has been admitted into the master of occupational therapy program at UM, and he looks forward to this next step in his education.

Goodbrandson has made a great impact in shaping the faculty into a more inclusive environment, and it’s clear that he plans to do that on a larger scale in the physical education and fitness industry. “Wherever I end up, I hope I’m in a position where I can positively influence the lives of others. It’s through my support system that I’ve been inspired to create this same impact for as many people as possible,” says Goodbrandson. 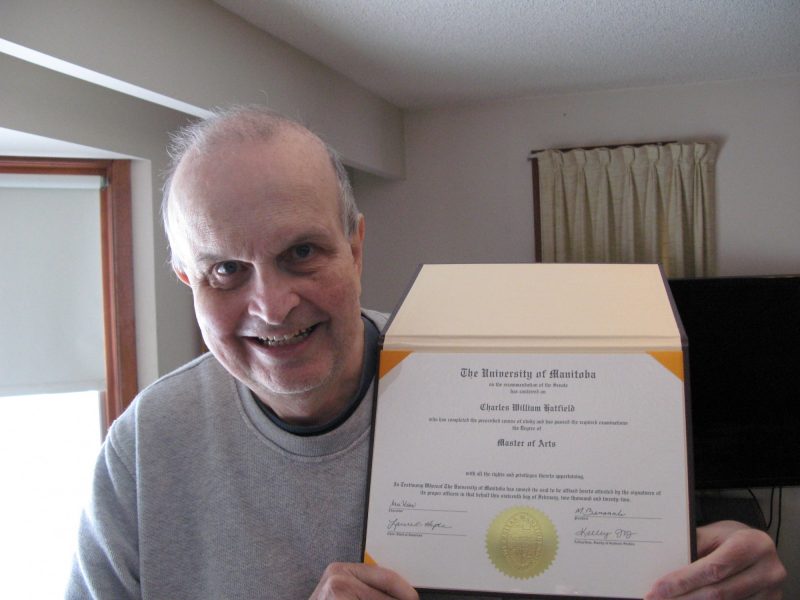 Charles Hatfield attended UM from 1968 to 1972, earning his bachelor of physical education and certificate in education, before going on to teach mathematics at Shaftesbury High School for 25 years. While he enjoys his well-deserved retirement after a rewarding teaching career, Hatfield’s decision to go back to university was sparked by a reason close to his heart.

Hatfield’s mother spoke German to him all his life. When she passed away, he feared losing the language after not being able to use it. He then started taking first-year German grammar classes to honour his mother’s native language and went on to take one course a year. A decade since beginning this journey, Hatfield is now graduating with a master of arts with a major in German studies.

His thesis focused on the depiction of Indigenous women in 19th century German literature. He presented his thesis at the Congress for the Humanities and Social Sciences and received the award for the best presentation by a graduate student in German studies.

At 71 years of age with three university degrees and enjoying retirement, he continues to embrace his passion for learning and setting an example as a successful mature student. Hatfield is grateful for the warmth and kindness showed by his peers and instructors in the department, and for providing a welcoming and helpful environment for an older student. 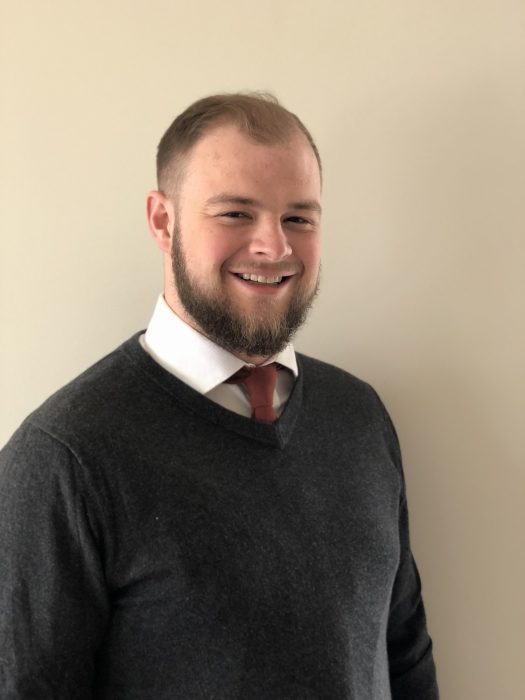 Shortly after high school, Alexander Janz started working in the construction industry where day-to-day tasks kindled his curiosity for architectural features and engineering concepts. Now, Janz is graduating UM with a bachelor of science in civil engineering.

Along with his networking abilities, his background in the workforce made him the perfect candidate for a student position with DGH Engineering, who hadn’t planned to take on students in their structural discipline unless they had one competency that set them apart – experience in the construction industry. His position with the company provided him with many opportunities to explore other interdisciplinary projects such as in agricultural and environmental engineering.

With his perseverance and his family’s support, two summer co-op terms with DGH Engineering evolved into Janz’s current position as an Engineer in Training. He is thrilled to be able to take part in an even greater diversity of projects and see what the future holds.

A more meaningful lesson he’s learned from his education, however, is “to be humble. If you look around, there are lots of things to learn. It’s very freeing to admit that you don’t always have the best solution. Be willing to learn from others.”

Janz is eternally thankful for his wife, Lise, who gave birth to their daughter, Millie, during his last semester. His wife’s infinite confidence in him is instrumental to his success, while having a daughter has completely changed his outlook on life. Despite loving his career, Janz has taken every moment to cherish his personal life and the people in it. 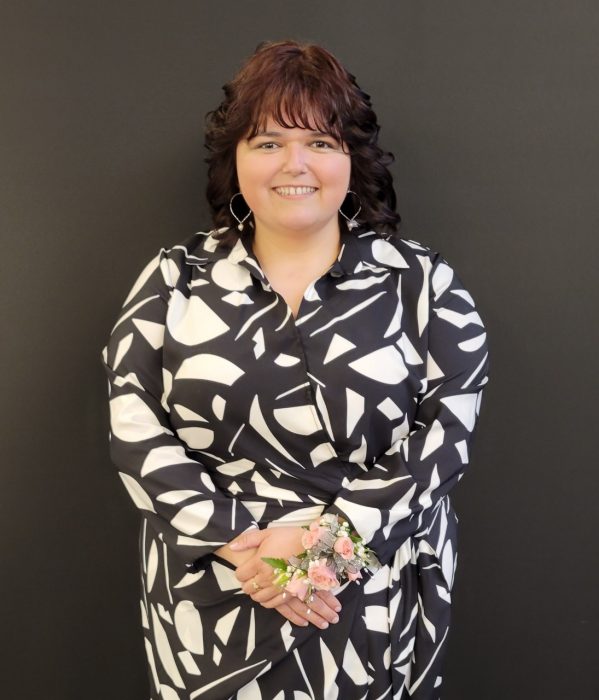 Growing up in the Métis community of St. Ambroise, Manitoba, Christie Lavallée was immersed in the outdoors and always taught to respect and honour the environment. Her background in traditional hunting developed into a strong passion for wildlife and conservation. In 2022, Lavallée earned a bachelor of science degree with a major in biological sciences.

As a visually-impaired cancer survivor, Lavallée’s early life unfolded differently but she has never let anything get in her way. Despite being legally blind, she was a competitive 3D archer who competed across Canada. Her success in archery complements her work in undergraduate research. She’s had the opportunity to work in entomology and parasitism, as well as avian research. Lavallée has contributed to two peer-reviewed journal articles, and she hopes to publish another in the near future.

Her determination as a student and an athlete has and continues to inspire everyone around her. Lavallée received the Indspire Youth Award in 2014, recognizing outstanding careers and youth achievements of Indigenous Canadians. She has also received funding from the Natural Science and Engineering Research Council of Canada (NSERC) three consecutive times, allowing her to conduct research and ultimately develop her skills as a wildlife scientist.

She will be heading to Trent University in Ontario to begin her master of science degree, where she will continue to work towards her goal of becoming a conservation biologist and teaching the next generation of wildlife researchers.