David Annandale (BA/90, MA/92) is definitely a Manitoba marvel. He’s a senior instructor in English, theatre, film & media in the Faculty of Arts, and has taught courses on video games, drive-in movies, and superhero films, and attained his doctorate at the University of Alberta.

It’s amazing he has time to teach at all, as he is a prolific local writer, with dozens of published books. His most recent work has been endorsed by none other than the company that took Iron Man and The Avengers from comic books to the movies. 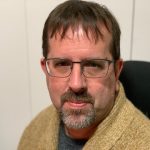 Annandale is known worldwide for his work in gaming literature, including a very popular series where players use miniature figures to re-enact large role-playing scenarios. He’s penned novels, short stories, screenplays, and journal articles about various aspects of gaming and its attraction. His work crosses many genres and it’s safe to say he’s a Renaissance man — if by Renaissance you include aspects such as Medieval battles, Sword and Sorcery, science fiction, mysticism, horror and the supernatural. 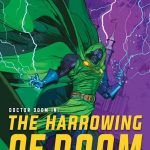 The Harrowing of Doom, Annandale’s latest novel, has received a lot of attention around the globe for its focus on a character that may soon burst onto the silver screen. The book is about an all-time favourite comic book villain, Doctor Doom, and is the first in a series of novels focusing on popular Marvel characters. Doctor Doom is a crazed evil scientist with a green cape and metal mask who is archenemy of the Fantastic Four, Spider-Man, Iron Man, Black Panther, Doctor Strange, the X-Men, and the Avengers. Reviewers are hailing Annandale’s story for its innovation and insight into characters that have been part of comic books for decades.

“From Doom’s laboratory to the gates of Hell, this is about as grandiose and epic a story as you could imagine… Much like the blend of sorcery and technology that fuels Doom’s daring plan, Annandale mixes gothic tragedy and bold, cinematic action (along with a fair amount of surreal occult antics) to create something powerful and exciting, and it proves to be as spectacular, characterful and downright entertaining as any Marvel movie.”

UM Today caught up with Annandale and asked him about his writing projects, and what got him started in the field of genre fiction.

Did you start out as a gamer first, or a writer?

I was a writer first, though I first started playing games like Dungeons and Dragons some forty years ago. I came to the Warhammer universes first as a writer, though.

Warhammer 40,000  (or 40K for short) is a game set in the 41st millennium, when the galaxy-spanning human empire has rotted into a hellish, dystopian dark age, and is in a state of perpetual war with rival alien civilizations and the forces of monstrous gods.

If 40K has a science fiction setting, then Age of Sigmar is the high fantasy one, where humans and a range of fantasy races (everything from dwarves to vampires and beyond) struggle with each other (and the evil gods) across vast, interconnected mystical realms.

What is it about Warhammer that attracts you?

The universes of the games, and thus the books about its characters and battles, are massive creations, bursting with lore and creativity. They are also bring together all the genres I love — horror, science fiction, fantasy, and more.

How many Warhammer books and stories have you written?

How much did Winnipeg or Manitoba inspire your works?

It depends on the story. Most recently, my novel Curse of Honor (a book that is part of the Legend of the Five Rings role-playing game universe) takes place in the midst of a ferociously cold winter. That was heavily inspired by Winnipeg.

What is the appeal of gaming?

There are so many ways in which games appeal, depending on the type of game and the type of player. With respect to the tabletop war games of Warhammer 40,000 and Warhammer: Age of Sigmar, I would say that one important factor is the personal investment that the players put into the assembling and painting the models, and this feeds into the sense of living a narrative through the act of gaming. The models are intricately detailed, and have complex background stories, and so each game is itself an exciting story.

Fantasy, science fiction, and “Sword & Sorcery” don’t seem to be considered “legitimate” literature by some literary scholars. Why is that?

Things have certainly changed a lot on this front, certainly since my days as an undergraduate, and while I can only speak from my own experience, this is not something that I have run into professionally. And since I have never considered genre fiction “illegitimate,” I can’t really speak for those who do. The relationship between “literary” and “genre” fiction, and the perceptions of each, remains a complicated one.

But you are an instructor in English. What do you like best about teaching?

When discussion is really popping in the classroom, and the students and I are both learning at the same time, things don’t get much better than that.

Your versatility has had you even producing plays for Fringe Festivals. How is it different writing plays versus, say, a spy novel like your acclaimed book Valedictorians?

Because of the collaborative nature of theatre, it meant that what I had on the page was transformed, through the interpretations of the director and the cast, into something that was the work of all of us. Though there is, certainly, a collaborative aspect to writing a novel through the relationship with the editor, the process is overall much more individual. Not to mention the need, when writing a script, to bear in mind what is physically possible to put on the stage.

What genre do you prefer?

Horror is my great love, and it influences almost everything I write, but science fiction and fantasy have been lifelong loves as well.

What was your favourite comic book when you were growing up?

I would have to point to two, as having been crucially important to me at different times. As a kid, it was the Marvel Comics Godzilla, King of the Monsters series, because I have been obsessed with Godzilla since year zero. Later, in early adulthood, it was Alan Moore’s run of Swamp Thing that I treasured the most. Brilliant horror with a monster as a main character. What more could I ask for?

The majority of your books are fantasy and sword-and-sorcery, so why did you write a Marvel supervillain story?

Doctor Doom as a character brings together science fiction, the fantastic and horror in one place. So that’s just one part of his appeal to me!

Did you have to get approval from Disney, which owns Marvel rights now?

Aconyte Books (one of the publishers I write for) has entered into an agreement with Marvel to publish a line of novels about some of their heroes and villains. Doctor Doom was one of the characters we could write about, so I sent in some pitches. The one Aconyte liked best was then sent to Marvel for approval. I wasn’t working directly with Disney. The novel, after being edited at Aconyte, was sent to Marvel editors for further feedback. The notes we got back were very helpful, but I was also given a lot of freedom with the story.

Why did you select Doctor Doom as your protagonist?

He’s been my favourite Marvel character for as long as I can remember. Well over forty years! So getting the chance to write him was something beyond a dream coming true, because I never dared to dream I would have this opportunity.

Is Doctor Doom a hero or villain? An antihero?

He is all of these things, depending on the context. That’s one of the reasons I find him so fascinating.

What is your Doctor Doom story about?

Every year, Doctor Doom has to face a champion of Hell in combat, with the prize being the liberation of his mother’s soul. The deck is stacked against him, and he is fated to lose, but now he believes he has found a way to turn the tables. The actions he takes will have fateful consequences for the people of Latveria.

Aren’t you blurring the lines between superhero fantasy and supernatural fantasy?

I am, but those lines are already blurred in characters such as Doom.

Who is more powerful: Doctor Doom or Reed Richards, the leader of the Fantastic Four?

Well, on the one hand, Richards always seems to win, doesn’t he? But then, Doctor Doom defeated the Beyonder, which is more than anyone else can say. I’m also biased, because Doom is my favourite.

Is Doctor Doom going to show up onscreen in the Marvel Universe in Spider-Man 3? Will he have a big role in the Phase 4 and future Marvel films now that the multiverse is in play?

Are you working on more Marvel stories?

I am, but I can’t say more than that right now.

Listen here: Recently, Annandale was interviewed on a podcast by the UM Institute for the Humanities.