The rise and fall of United Grain Growers 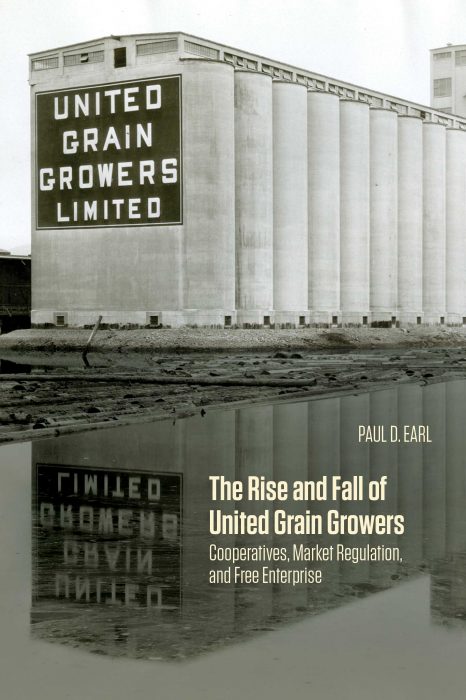 On Nov. 4 University of Manitoba Press is launching The Rise and Fall of United Grain Growers: Cooperatives, Market Regulation & Free Enterprise. Written by Paul D. Earl, an alumnus of, and professor in the Asper School of Business, the book explores the history of legacy of United Grain Growers, a cooperative that grew into the largest grain company in Canada.

“This book will make an outstanding contribution to the history of the grain cooperatives in Western Canada, not only because of its content but also because it was able to cover the story from their inception to their sudden disappearance in 2007. The Rise and Fall of United Grain Growers is well researched, well written, and well referenced. The level of detail the book contains throughout is impressive,” says Murray Cormack, former CEO of Manitoba Pool Elevators and former Deputy Minister of Manitoba Industry, Trade and Tourism.

Earl worked for many years in the grain industry before joining UM’s faculty in 2003. He is currently a senior scholar with the Asper School’s Transport Institute.

What: Launch of The Rise and Fall of United Grain Growers: Cooperatives, Market Regulation and Free Enterprise
When: Monday, Nov, 4, 2019, 7:30 p.m.
Where: McNally Robinson Booksellers, Grant Park Mall, in the Travel Alcove

For much of the twentieth century, United Grain Growers was one of the major forces in Canadian agriculture. Founded in 1906, for much of its history UGG worked to give western farmers a “third way” between the competing poles of cooperatives like the Saskatchewan Wheat Pool and the private sector. At its peak, more than 800 UGGelevators dotted the Canadian prairies and the company had become a part of western Canada’s cultural psyche. By 2001, then known as Agricore United, it was the largest grain company on the Prairies.

The UGG’s history illuminates many of the intense debates over policy and philosophy that dominated the grain industry. After the Second World War, it would be a key player as the western Canadian grain industry expanded into new international markets. Through the rest of the century, it played an important role in resolving major disputes over regulation and grain transportation policy.

Despite its many innovations, the company’s final decade and eventual demise illustrated the tensions at the heart of the grain industry. In 1997, to finance the rebuilding of its grain elevator network, UGG went public and entered equity markets. While successful at first, this strategy also weakened the company’s cooperative structure. In 2007, it was purchased by Saskatchewan Pool in a hostile takeover. The disappearance of Agricore United marked the end of a century of voluntary farmer-control of the grain business in western Canada. Paul Earl’s history reveals UGG’s central role in the growth and transformation of the western grain industry at a critical period. With meticulous research supplemented by interviews with many of the key players, he also delves into the details and the debates over the company’s demise.

2 comments on “The rise and fall of United Grain Growers”