Multi-wavelength image of the environment of J1818 in radio (red), infrared (green) and X-ray (blue). Thanks to Dr. Loren Anderson (West Virginia University) for providing the high-resolution MAGPIS (radio) and SPITZER (infrared) images.

Astrophysicists Dr. Samar Safi-Harb of the University of Manitoba and Dr. Harsha Blumer at West Virginia University have published their analysis of a “baby” cosmic object known as a magnetar. The object, named Swift J1818.0−1607 (J1818, for short), was discovered only this past March when it emitted powerful bursts of X-rays in our direction, detected by an instrument onboard NASA’s Neil Gehrels Swift Observatory.

J1818 is believed to have been created by an exploding star that left behind a Winnipeg-sized star with the strongest magnetic field found in the universe. To investigate its nature further, Safi-Harb and Blumer requested a quick follow up with the Chandra X-ray Observatory, NASA’s flagship mission for X-ray astronomy.

Safi-Harb says: “Chandra has superb imaging resolution in X-rays. Having Chandra’s eyes is like reading a newspaper from about a kilometre away!”

Safi-Harb explains: “J1818 is a newly discovered magnetar with a super strong magnetic field and may be the youngest of its kind known—only about 470 years old, which is a ‘baby’ compared with the age of other objects in the universe that can be millions of years old or older. The fact that J1818 is the youngest discovered allows astrophysicists to watch it ‘grow up,’ as most magnetars are already at an advanced age when they are first seen.” 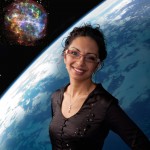 If this age is true, our ancestors here on Earth would have witnessed the supernova explosion that created the magnetar, however its complex environment and distance may have hidden it from view.

Safi-Harb says: “It is also one of the fastest-spinning magnetars, with a period of only 1.36 seconds,” meaning that the entire Winnipeg-sized object is revolving completely around almost once every second.

Magnetars are particular kinds of neutron stars that are left after a massive star goes supernova and explodes. They are among the densest objects in the universe, next only to black holes, and a teaspoonful of a neutron star would weigh billions of tonnes. These exotic objects possess the most powerful magnetic fields in the Universe and can erupt with enormous amounts of energy.

A typical compass needle here on Earth responds to our planet’s magnetic field, which is defined as a value of about one Gauss. A refrigerator magnet sticks with a magnetic field of about 100 gauss. Magnetars don’t fool around; they are of the order of 1,000,000,000,000,000 Gauss. If J1818 was as close to us as the Moon, it would rip apart the molecules in our bodies in an instant.

Safi-Harb says J1818 is also a “radio loud” magnetar, which are usually seen only in x-ray and gamma-ray light. When neutron stars form, they develop a tough crust on the outside of the condensed star. In magnetars, this outer crust can crack occasionally due to their extremely high magnetic field causing “starquakes”, the cosmic equivalent of earthquakes, and release mainly powerful bursts of X-rays and gamma-rays and in some rare cases, radio waves. 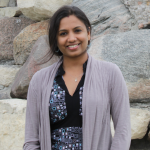 Blumer notes: “We have the curious case of a very young magnetar emitting both in high-energy and radio, one of only five such sources known so far. Our study reveals that J1818 is a transient source behaving both like a young rotation-powered pulsar and a magnetar, a rare scenario where its powering engine swings between rotation and magnetic energy.” Rotation-powered pulsars are powered by their spin and emit long-lived radio beams.

Safi-Harb and Blumer followed up this baby magnetar using the Chandra telescope to study its complex environment and discovered a compact, tiny nebula that would have been easily missed with any other telescope.

Safi-Harb says: “We think this tiny glowing patch is a halo resulting from the scattering of light by dust, but it could also be hiding underneath a nebula shining due to the relativistic particles and magnetic field injected by the magnetar. Time will tell.”

Further, she and Blumer are intrigued by the lack of a “parent” shell that may have come from the explosion which created the magnetar, something which can be explored only with deep radio and X-ray observations. Safi-Harb notes that a significant aspect of their study highlights the importance of Chandra in revealing compact diffuse X-ray emission around such extreme objects, which is not possible with any other satellite.

Blumer further adds: “We learn new and exciting things about space everyday, and discovering more such sources would also be key to understanding the connection between magnetars and fast radio bursts.” Fast radio bursts, or FRBs, are powerful millisecond duration flashes of radio waves from space discovered in 2007, but their origin is still a mystery.

Their study of Swift J1818.0−1607 was published in the journal Astrophysical Journal Letters.

UM research was funded by the Natural Sciences and Engineering Research Council of Canada (NSERC) and made use of data acquired with NASA’s Chandra X-ray Observatory operated by the Chandra X-ray Center.