Optimus Gear is designed to protect pets riding in vehicles

A family project that’s gone to the dogs

Gordon Templeton [BSc(ME)/10] was in his mother’s basement one day, “destructively testing” his invention, when he knew he was on the right track.

“There really wasn’t anything like it on the market, so I knew I had to make it myself,” he explains.

Templeton, a UM Price Faculty of Engineering civil engineering alumnus, had been driving his car with his dog Nala beside him, when he had to brake suddenly. Although jostled, they were both okay, but he realized that his beloved pet might have been seriously injured.

He immediately began searching for safety products for pets but found none were anywhere near strong enough for a dog of Nala’s weight and build. 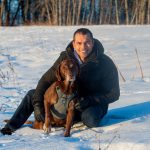 Gordon Templeton with his dog Nala

He began designing a better safety harness and its supporting elements, eventually creating a prototype that he “tested destructively” in his mother’s basement.

“No hardware existed to even manufacture such a thing,” Templeton says. “We had to come up with the design ourselves. Even the tools to make it needed to be developed ourselves!”

By “we,” Templeton credits his family, which has been very supportive through the entire venture, many of whom have strong UM connections. His grandfather is Bhagwan Thadani, a UM civil engineering professor, and his uncle Vijay Thadani is a civil and environmental engineering graduate [BSc(CE)/85, MSc/88].

Gordon Templeton’s father, John Templeton, is a retired chemist who taught in the UM Faculty of Pharmacy, while his mother Meera Thadani, is a double UM grad [BSc(Pharm)/78, MSc/87] and taught in pharmacy as well, plus has been working at the University Centre Pharmacy. Finally, his wife, Dana Conrad is a double UM grad too [BSc/10, MPAS/12], in genetics and as a physician assistant.

“My entire family has been supportive and contributed to this project,” he says proudly.

But beyond the family connections, Templeton credits his UM engineering training. He explains: “This invention took a shocking amount of engineering. If I hadn’t had my mechanical engineering degree I wouldn’t have been able to do this.”

Thanks to skills learned at UM and his supportive family, pets such as his beloved Nala can ride safer while traveling on Winnipeg streets.