What did health professionals learn about dealing with viral outbreaks from the Ebola epidemic of 2018?

Brayden Schindell (BSc/18) is a doctoral student in Dr. Jason Kindrachuk’s Laboratory of Emerging and Re-emerging Viruses, in medical microbiology and infectious diseases at the Rady Faculty of Health Sciences. He was the first author on a major paper published in the scientific News Journal Contagion Live, with co-authors Dr. Kindrachuk and Dr. Krutika Kuppalli. The paper was about what the ongoing Ebola epidemic in Africa taught medical researchers and health professionals about their responses to viral outbreaks and how they were able to deal with them.

Schindell didn’t go to Congo to study Ebola himself, but Dr. Kindrachuk and his collaborator Dr. Krutika Kuppalli were both in West Africa helping support the prior epidemic. Kindrachuk was helping to coordinate and run testing while working with the US National Institute of Allergy and Infectious Diseases, while Kuppalli was overseeing an Ebola treatment centre.

Schindell’s doctoral research involves looking at the persistence of the Ebola virus within the reproductive tracts of survivors, and how it enters these regions of the body. He is also studying long term reproductive health effects, through administration of a questionnaire and sampling of a cohort of survivors.

He explains: “Both aspects of this project are important, as sexual transmission is partially responsible for extending the epidemic of Ebola virus in West Africa into 2016. This can occur because male survivors can carry the virus undetected in their testes for more than 1,100 days after recovery from the disease and spread it through semen. It is also believed the virus can persist in females, but research on this is unfortunately greatly lacking.”

Schindell graduated from UM in microbiology in 2018, then began his graduate studies with Kindrachuk and his ambition led him to pursue his doctoral program in medical microbiology and infectious diseases (MMID). He received a CIHR Canada graduate scholarship for his master’s program, and is the current vice president for the MMID Student council.

Even though Schindell is not in the lab at the moment because of the pandemic, he recently finished helping with a weekly newsletter for the Cadham Provincial Laboratory, for frontline workers and health officials to inform them on the latest information available for SARS-CoV2. He was working with medical residents, med students, librarians and other grad students who are trying to assist the effort against COVID-19, however they can. 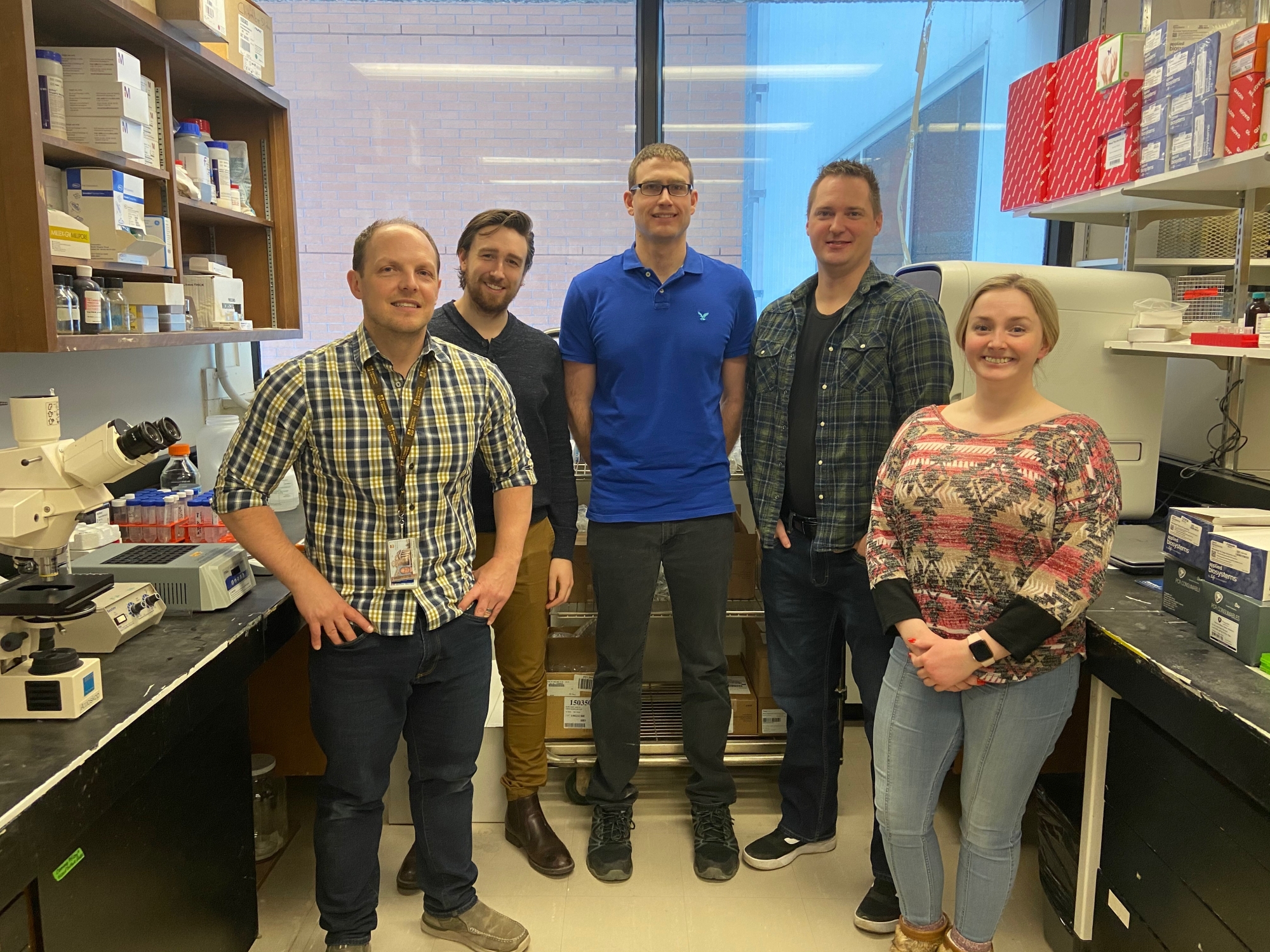 UM Today posed some questions to Schindell about his research and what it is like working with leading researchers of the calibre of Drs. Kindrachuk and Kuppalli.

Your article says there were about 2264 deaths attributed to the virus, with a 65 per cent fatality rate. In a country of 80 million people, had interventions not taken place, the number of deaths would have been much higher. And now, almost 300,000 people have been vaccinated, with 95 per cent protection. Your paper says that Ebola was contained because of cooperation and working together. Can you elaborate on this?

Yes, that is correct in the current outbreak in Eastern Democratic Republic of the Congo. And there has unfortunately been a recent re-emergence and new cases, just as the country was days away from declaring the outbreak over (as it had been over a month since someone tested positive for the virus).

There has been a huge international effort towards containing Ebola since the West African epidemic occurred in 2013-2016. Ongoing research is looking to understand the virus and how it does the damage that it does, how it spreads to people and between people, and how to treat and vaccinate against it.

With front line workers that risk their lives to care for, and trace contacts, this to date has been a testament to international collaboration to support local governments and populations. That isn’t to say any of it has been easy, especially for front line workers in this current outbreak in Eastern DRC which has had a lot of community mistrust and violence from the many armed groups in the region, making access to some affected communities impossible.

The drug Remdesivir was one of the effective therapeutics used in West Africa against Ebola. It’s being tested against COVID-19 now. Since it worked against a very virulent disease, is it possible it can work against COVID-19?

Remdesivir was one of four therapeutics tested in what has been known as the PALM trial, also including mAb114, ZMapp (which was developed in Winnipeg at the National Microbiology Laboratory) and REGN-EB3. Unfortunately both Remdesivir and ZMapp were significantly less effective at reducing mortality than mAb114 and REGN-EB3 and were discontinued in the trial. Remdesivir is now being tested in clinical trials for treating SARS-CoV2 infections and has been granted emergency use status by the FDA for some preliminary results from a clinical trial in the USA. Gilead Sciences which produces it has found in research conducted in cell culture that it potentially has broad activity against several different families of viruses, including coronaviruses. It is currently being investigated in clinical trials and while preliminary data seems to show some effect on duration of infection we will have to wait to see what the final data of these studies are.

I do think that the recent epidemic in West Africa and the outbreaks in DRC recently have shown how well a unified effort of research as well as treatment and containment can work at successfully ending an epidemic/outbreak. I think the most important lesson learned from these recent outbreaks has to be that none of this can be done successfully without both community engagement and community trust. Without this, nothing you wish to implement will be completely successful. We have seen the effects of what can happen without community trust in some parts of the world as an example some US states where defiance of public health orders has resulted in resurgence of SARS-CoV2. Taking the time to engage with individuals and community leaders just like with Ebola will play a vital role in gaining cooperation and trust of people. This can then allow health officials concentrate their efforts on containing the virus.

Here in Canada people really seem to be doing a great job of buying in and trust appears to be strong in the efforts being taken. However, as communities begin to open up again that trust and cooperation becomes more important and will be tested as this is when social practices to this point become most important. Canada also with its recent announcement of a national medical research strategy will go a long way in bringing unity to research efforts. One important difference between Ebola and SARS-CoV2 to note is that due to research efforts there are now a couple effective treatments that are being tested as well as an approved vaccine for Ebola and there are still no treatments or vaccines available for SARS-CoV2.

Dr. Jason Kindrachuk is probably one of the best and most visible spokespersons for the fight against COVID-19. What’s it like working with him?

Dr. Kindrachuk has been a great voice to bring some clarity to all noise that has been out there, and I and all the others in his lab believe it’s an important thing to be doing.

It is a wonderful experience to have the opportunity to work with Dr. Kindrachuk; he is a very inspiring person who has a passion for the subject of emerging viruses and for teaching people about those viruses. His passion is contagious – no pun intended. There have also been a lot of great collaborators I am now lucky to be working with and learning from through the contacts he has made such as Dr. Kuppalli. He is a great mentor professionally and personally, I feel very fortunate to have the opportunity to learn from him.

Since Dr. Kindrachuk is working on possible antivirals and vaccines, you must be in the thick of it too. Do you feel that progress is being made?

Currently his lab is shut down along with the majority of other labs on campus following the current University decision for the safety of staff and students. But we hope to be getting back to work on our projects soon as everything begins opening up with the province’s announcement of the phase 2 plan for reopening. I know we have all been itching to get back at it and contribute best we can to the COVID-19 research effort and for science as a whole to ramp up again as there is a lot of important work that has been on hold in all fields. [NB: as this post was in process, Kindrachuk’s lab as in fact opened.]

We know that testing of vaccines takes time, and there might not be anything ready for wide distribution for many months. What about antivirals? Are we close to those?

In general progress towards developing vaccines and drugs takes time, unfortunately. However, with what has been learned through past experiences such as with Ebola virus, the process to making antivirals and vaccines is much more efficient than it used to be. As mentioned remdesivir has been granted emergency use approval and over 100 labs globally that are working day and night to find successful treatments and vaccines. An example of this is the recent announcement of the vaccine developed by CanSino Biologics Inc. with the Beijing Institute of Biotechnology that will be starting a clinical trial at the Canadian Institute of Vaccinology in Halifax following promising results in China.

What do you think about many regions in North America that are now “opening up” and trying to “get back to normal?”

As health officials and the Prime Minister have said, the “normal” we knew won’t return until a vaccine is available. I know the decision makers are ensuring as things open up again that each is done only when determined it is safe and feasible to do so. We all just need to be patient and mindful of the social practices we have learned through this pandemic so our progress doesn’t regress as I said in an earlier question this is when trust becomes very important.

In your opinion, what will “normal” look like in three months? six months? a year?

“Normal” will be different than it was as I am sure you have noticed a lot more people are wearing PPE such as masks that are not medical professionals. People are a lot more conscious to maintain that two metres’ distance from others. Large gatherings will probably be something that we don’t see for a while either. These and other basic measures will most likely not change until large scale vaccinations can take place which could be over six months or even a year.