When I was a teenager growing up in rural Manitoba, my house nestled next to a farmer’s field on the edge of my small town, Pride month wasn’t on my radar. June was marked by warmer days, the start of summer break and the opening of the local outdoor pool. At that point, I hadn’t discovered my queerness and I didn’t have any role models to help me put the puzzle pieces together. In the mid to late 90s, 2SLGBTQI+ people in pop culture were practically invisible, and while I’m sure there were members of the queer community in my hometown, I can think of only one person in my orbit who was out, and he dealt with a tremendous amount of bullying because of it.

It took moving to Winnipeg and starting classes at the University of Manitoba for me to connect with more people on the rainbow spectrum, and many more years to build up my own queer community. I attended my first Pride Winnipeg around 2009 with my gay best friend, a guy I’d gotten to know by hanging out in rehearsal halls and putting on plays with UM’s Black Hole Theatre. I remember being blown away by how many people were marching in the parade. Where do they hide the other 11 months of the year? Still today, one of my favourite things about Pride is seeing the incredible diversity of queer communities on display. 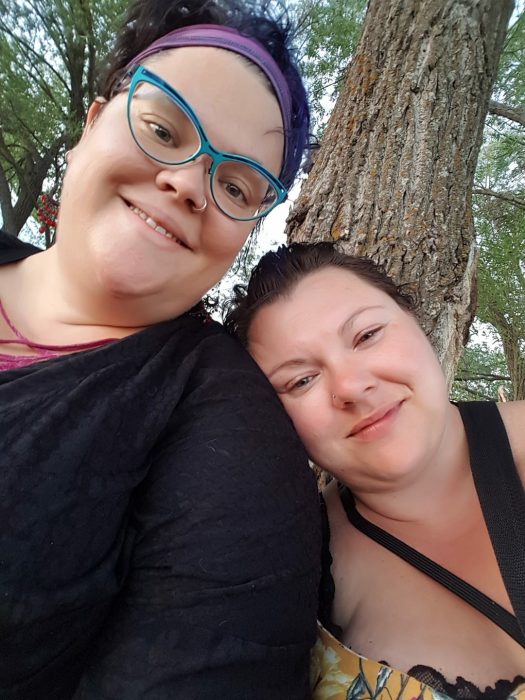 According to Pride Winnipeg, at this city’s first march in 1987, a few people “wore paper bags over their heads to conceal their identities for fear of discrimination and ridicule from friends, family members, and co-workers.” I’ve never had to go to those lengths to hide my queer identity, but during those years when I was trying to figure it all out, I wasn’t exactly an open book either. I was open with my friends. Eventually I was open with my immediate family. Beyond that, my stance was, why do I need to be? Heterosexual people don’t go around declaring they’re straight.

I adopted the philosophy perfectly expressed by a character on the television show Orphan Black: “My sexuality is not the most interesting thing about me.” While this is still true, I also think my shyness around that part of myself goes back to the invisibility of queer people, culture and experience in my youth. When 2SLGBTQI+ people are only spoken about in whispers, and you don’t see anyone like you in your community or on TV, you internalize that it’s safer to stay quiet.

My philosophy radically changed in 2016. By that point, I’d been working at a community health centre for several years. I’d met many people—mostly gay men of a certain age— who had survived the AIDS crisis and had watched their queer community die around them. I was surrounded by coworkers and friends who embraced me for who I was, and I felt comfortable with myself.

On June 12 that year, a man walked into Pulse, a gay nightclub in Orlando, and started shooting, killing 49 people and wounding 53. Though there is some debate over whether the shooting was motivated by anti-2SLGBTQI+ hate, the incident remains the deadliest act of violence against queer people in the United States. The next morning, as I processed the news over a steaming cup of coffee, I thought about all the queer lives that had been lost in a single night and I decided I didn’t want to stay quiet anymore. It’s an incredible gift to be alive and live in a country where being who you are isn’t a crime. This hasn’t always been the case— same sex acts were criminalized in Canada until Pierre Trudeau announced “there’s no place for the state in the bedrooms of the nation” in 1969— but on that day in June 2016, I felt like I should use my privilege to be visible on behalf of those who weren’t so lucky.

Contrary to popular narratives, “coming out” doesn’t just happen once. You show and tell people who you are in many small moments over a lifetime. Along the way, there have been some more significant moments that stick out: in 2018, I walked in Winnipeg’s Pride parade holding hands with my female partner for the first time. I was overcome with feeling: of pride, of love, of a sense of belonging. During this time when we haven’t been able to gather as a community, I hold onto that feeling. I choose to be visibly queer. In the absence of a formal pride celebration this year, I encourage other queer people to join me. Be the role model someone else needs to see.

Teri Stevens (she/her) [BA/05] is a communications officer with UM’s Marketing Communications Office. She also hosts the radio show Venus Envy on UMFM, featuring music by female, gender diverse and queer artists. She lives in Winnipeg with her partner, three cats and a dog.