Elder Carl Stone shares the history behind the Gathering and why it’s important.

We sat down with Elder-in-Residence Carl Stone to learn some of the history behind Elders Gathering at the UM, his involvement and to learn about what to expect by attending the two-day event. 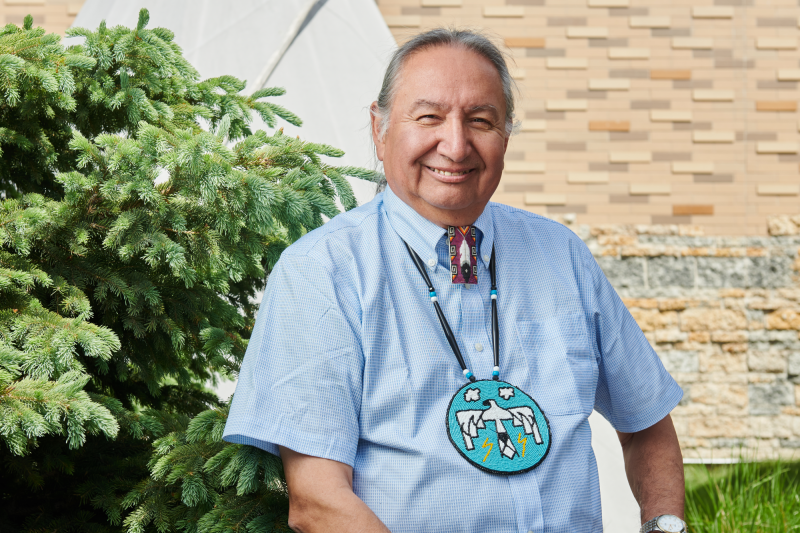 Elder Stone was a part of the original planning committee for the inaugural Elders and Traditional Peoples Gathering in 2002 at the UM.

“(As a student), I came in with a lot of Indigenous knowledge. In fact, I questioned whether I should come to university because I was afraid that it would tamper with the traditional knowledge that I had.” Elder Stone shared that Elders eventually encouraged him to go to university because they believed it would make him stronger. He shared that an Elder once said to him “They need you. They need what you know. They need that there.”

Conversations were happening about bringing in traditional knowledge to the university. While speakers were coming in to speak about traditional knowledge or other Indigenous topics, there was a lack of intention and the involvement of the Indigenous community on and off campus. These conversations started taking place approximately two years prior to the first Elders Gathering.

“I recall that I shared my story about going to the youth and Elder gatherings that were happening in late ‘70s and early ‘80s, where we had people like Tom Porter, Ernest Tootoosis, Phillip Deere and Eva McKay. Those Elders really influenced us back in the day. They influenced us young people to take a stronger look at our own identity, culture and spirituality. Based on that experience, when we were talking about bringing Elders Gathering to the university, I suggested we pattern it after that. I said the simplest form is to bring Elders in and have them talk about the culture to the young people.”

Others involved in the initial planning included: Kali Storm, then-director of the Indigenous Student Centre, Roxanne Shuttleworth, professor Fred Shore, professor Peter Kulchyski and other students from the Department of Native studies.

Learning from each other

Over the years, firekeeper teachers became part of the Gathering, sharing teachings about fire and how it relates to men. Elder Stone explains that in the Anishinaabeg culture, it is the men who are responsible for the fire and the fire-keeping during ceremonies. He mentioned that the Cree have different views on fire-keeping and it involves both men and women. He learned about this difference at an Elders Gathering.

“That’s a perfect example of why we were having the gathering. It’s so that we can teach each other and learn about each other’s culture, spirituality and traditional teachings. When I say ‘traditional’ teachings, it means those teachings that we have originally as a people that are not from Europe.”

Why the gathering is important

Over the years, many people have referred to the Elders Gathering as what woke them up to who they are and to their culture and identity. “That was one of the primary reasons we wanted [to hold] the gathering, because we saw a lot of [Indigenous] students coming to the university basically being ‘Indigenous white folk’, if you will, and not taking pride in who they were,” says Elder Carl. “They were pretending to be someone else. The whole intent and idea behind the Elders Gathering was bringing that kind of knowledge and imagery for people to see, not just our own Indigenous people, but the people at the University of Manitoba.”

For Elder Stone, it’s important to remind people of the history and why the Indigenous Student Centre continues to host the Elders and Traditional Peoples Gathering because if we forget and move further away from its original intent, we risk losing its essence and having it turn into something like an academic exercise rather than the opportunity for community growth and contribution to the identity as Indigenous peoples, their spirituality and traditional teachings. He hopes that other people will see Indigenous people who are still connected with their ways of life from thousands of years ago and not see Indigenous people through an anthropological lens.

“Although we’re saying a lot of it in English, they will be hearing the languages that our people speak and they’ll know and understand; for example: Gizaagi’in. I just told you that I love you in the language. Europeans didn’t bring “the good book” here to teach us love. We already had it. For thousands of years, that’s how old our languages are and that’s how long we’ve been telling each other we love each other because it’s in our language. Nobody came here and told us this is how you love. In fact, it actually did the opposite. They taught us to judge the ‘old ways’ by calling it devil worship and [they] started telling us to hate each other rather than love each other.”

On Oct. 13, Elder Stone will be conducting the Pipe Ceremony along with Elder Wanda Murdock at 8:00 a.m. at Migizii Agamik – Bald Eagle Lodge to open the Elders and Traditional Peoples Gathering in a good way. He will also be sharing his knowledge and thoughts about what it means to be a man in today’s world and what that means for Indigenous men.

If you want to connect with Elder Stone and other Elders and Traditional Peoples, the Indigenous Student Centre welcomes everyone to attend this free event for the opportunity to build community and to learn from each other. Along with the listening circles with Elders and Knowledge Keepers, there will be art sessions and Indigenous walking tours. The National Centre for Truth and Reconciliation will also be hosting an open house and lunch will be served on both days.

For the schedule and further details, please visit the Elders and Traditional Peoples Gathering webpage.