Sixteen teams of Robson Hall students competed in the seventeenth annual Robson Hall Negotiation Competition on the evening of November 29th, 2022.  These third-year students were selected for having excelled in the Legal Negotiation course they took in their second year of law school.  The main purpose of the competition is to develop superb negotiating skills in Robson Hall students for use in their legal career. All legal training and professional expertise is directed toward one key objective—solving a client’s problems. Negotiation is the primary tool for accomplishing precisely that.

In teams of two, the students met with another team representing the other side, each team possessing confidential details about their client’s circumstances and settlement preferences.  This year the hypothetical problem centred around the alleged breach of a contract with a morality clause. A fictional organization with a mission to reduce the number of intoxicated-driving incidents hires a famous guest speaker to give a talk at its annual conference, and this speaker is charged later that evening with driving under the influence, leading to bad publicity for both the organization and the speaker. The organization refuses to pay the speaker, relying on a “morality clause,” and both parties are threatening litigation. All this took place under the close scrutiny of the judges who scored each team’s negotiation skills.  At the end of each session, the judges provided detailed feedback to each team about what they did well, and potential areas for improvement.

The event was generously sponsored by Fillmore Riley, which has a very long history of supporting the competition.  In addition to covering all competition costs and supplying cash prizes, lawyers from the firm volunteered to judge the students.  These lawyers were: Don Baker, Annika Friesen, Aron Grusko, Sven Hombach, Rachel Loewen, Keith Senden, Delaney Vun , Ranish Raveendrabose, Andrea Signorelli, Brynne Thordarson, and Sarah Thurmeier. Additionally, Ukrainian Natella Roskoshna, who is a Visiting Scholar at Robson Hall, judged the competition. 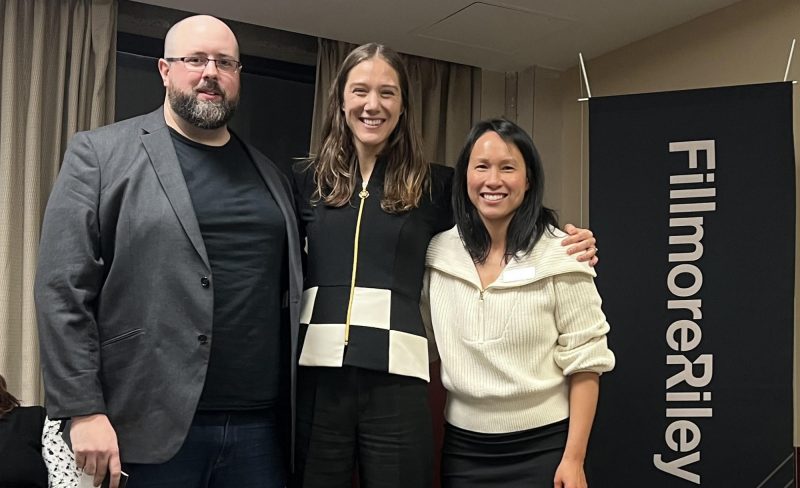 These judges were tremendously impressed with the caliber of the students’ negotiations, and were faced with the unenviable task of selecting a winner.  Due to their stellar performance, the negotiating team of Ramsay Hall and Samantha Harvey were awarded first place. The runners up, who also did a tremendous job, were Benjamin Leahy and Jodi Plenert.  Both teams will now represent Robson Hall and compete in the Canadian National Negotiation Competition, which will be held in Montreal in February of 2023.  Robson Hall students have a long history of success in inter-school competitions: the winner of the 2014 Robson Hall competition even went on to win the 2015 International Negotiation Competition in Dublin, Ireland.

A sincere thanks to Fillmore Riley for its generous sponsorship of the competition.