The arms of the University of Manitoba 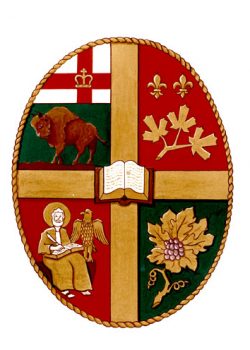 October 15th, 1992, by Governor General Ray Hnatyshyn and presented by Robert Watt, the chief herald of Canada. At the time the university president was Dr. Arnold Naimark and the chancellor Arthur Mauro. However, what is known as the Symbolism or official description of the arms was not actually granted by the Canadian Heraldic Authority (a branch of the Governor General’s Office) until last year. The Symbolism is written as follows:

The arms are based on the seal adopted by the university at its establishment in 1877, a quartering of the arms of the province of Manitoba and the university’s three founding colleges: the Collège de Saint-Boniface (now the Université de Saint-Boniface), St. John’s College and Manitoba College. The open book symbolizes knowledge, while the coat of arms recalls the placement of the Royal Crown at the top of the original design. A wood plaque from 1919 showing the shield of the U of M at that time. // Archives and Special Collections

3 comments on “The arms of the University of Manitoba”