The Engineering and Architecture Faculties successfully applied for an Indigenous Initiatives Fund to build a ceremonial structure at Shoal Lake 40.

Proposals for the 2019 Indigenous Initiatives Fund are now being accepted

Shawn Bailey decided he wanted to do more to incorporate Indigenous knowledges into his work as an architect and professor. This seemed like the perfect opportunity to partner with the Dean of Architecture and Engineering, Jonathan Beddoes, who envisioned a design build project in community. A cross-appointed assistant professor in the faculties of Architecture and Engineering, Bailey brought together a team of colleagues who shared similar interests — including Beddoes, Marcia Friesen, Farhound Delijani and researcher Jillian Senik Cicek– for a structural build based in community and applied for an Indigenous Initiatives Fund.

The Indigenous Initiative Funds are open to faculties, schools, colleges, libraries and administrative units to support unit-based projects that further the Indigenous Achievement goals and priorities outlined in Taking Our Place, the U of M’s Strategic Plan. 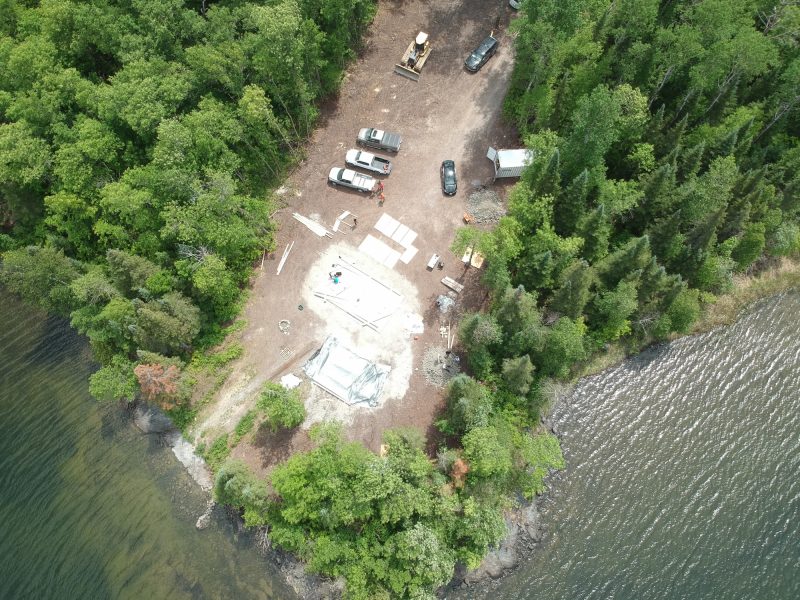 The space for the structure will be open to community for feasts and gatherings.

Bailey and his team’s successful application proposed to develop and implement a design and studio course that would involve undergraduate and master’s students from the faculties of Architecture and Engineering. The students, under guidance from professors, would work with the community members of Shoal Lake 40 First Nation to design and build an outdoor structure to be used for feasts and gatherings.

Chelsea Dubiel, an engineering student, said the experience impacted them as both a student and as a person born and raised in Winnipeg. “Becoming more educated on the history of Shoal Lake 40 – while also developing personal relations with the community – exposed me to the truth that has to be met with a collaborative effort towards reconciliation,” Dubiel said. The project was a real-life experience that put project management skills at the front and centre, and created a space where Dubiel was able to utilize all of her technical, professional and interpersonal skills.

The community was also receptive to the project. “We had some students with no carpentry experience,” Bailey said. “That’s when carpenters from the community were able to step up and lend a hand in a valuable way.” The project created an environment where community and students came together to combine building experience and design experience, Bailey recalled.

Bailey’s main contact in the community was Councillor Roxanne Greene. Since the project wrapped, Greene is enthusiastic to explore further opportunities to collaborate with the two faculties. “It’s an ongoing partnership, so the faculties and students look forward to returning to the community for more projects,” Bailey said.

Bailey believes this project was rooted in reconciliation. “The act of making something together was the best thing that could happen for the students,” he said. “As the project progressed, it was clear we had built a community together.”

To learn more about the building project at Shoal Lake 40, please attend the Indigenous Scholars Speakers Series with Shawn Bailey and Roxanne Greene at 12 p.m. on Nov. 26 at the Centre Space in the John A. Russell Building.

You can also check out the progress of the project by following @ShoalLake40DesignBuild on Instagram.