Strikers try to overturn a streetcar in 1919 in the Winnipeg General Strike in front of the old city hall building on Main Street. // L.B. Foote collection/Archives of Manitoba

On November 6th, 1919, co-founder of the Manitoba Law School Hugh Amos Robson, K.C., as he then was, tabled his report as Commissioner of the Royal Commission to Enquire into and Report Upon the Causes and Effects of the General Strike which Recently Existed in the City of Winnipeg for a Period of Six Weeks, Including the Methods of Calling and Carrying on Such Strike.

Within this long sub-title, the whole purpose of the report is clear. Addressing the origins of the strike, including the various trades disputes happening at the time, the specific cause of the strike, and the general discontent of Winnipeg’s working class, Robson concludes that the striking workers had legitimate reasons for their dissatisfaction, and that the strike was not primarily caused by radicals trying to over throw democracy as had been touted by the “Citizen’s Committee of One Thousand.” Comprised of local business owners and members of Winnipeg’s legal community, the Committee had worked to end the strike, which did officially conclude on June 26, 1919, after two people had died, and many had been wounded and arrested. 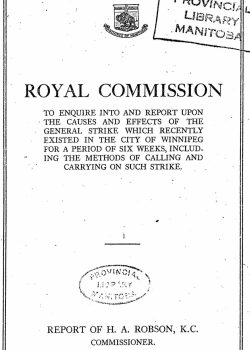 Robson, the namesake of the building that has housed the University of Manitoba’s Faculty of Law since 1969 here at the Fort Garry Campus, established the Manitoba Law School in 1914, five years prior to being appointed Commissioner of the General Strike enquiry. At that time, he had already led an interesting life having been born in England, practiced law in Regina, and been an eye-witness at the trial of Louis Riel. Since 1899, he had practiced law at the firm of James Aikins in Winnipeg, served as a Bencher for the Law Society of Manitoba, co-authored several important text books on Municipal Law, and served as chair of a public utilities commission for Manitoba.

Dr. Bruce Curran, Associate Dean of the Juris Doctor (Bachelor of Laws) program at today’s Robson Hall, describes Robson “a lawyer and jurist remarkably ahead of his time,” which is evident in the report where 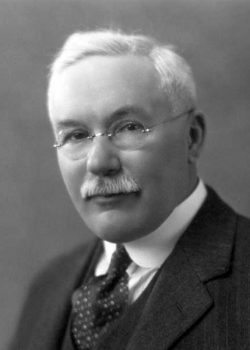 Robson demonstrates awareness and sensitivity to the deplorable conditions of wage earners of his day. Curran, who holds a Ph.D. in Industrial Relations from the University of Toronto, will soon have a paper examining the impact of Robson’s Royal Commission report published in the forthcoming Manitoba Law Journal’s volume 42 (2), titled Chief Justice Robson: A selection of his original works and contemporary reflections on them.

According to Curran, Robson “viewed the Winnipeg General Strike as legitimate, and unlike some of his legal contemporaries, believed that the workers were, for the most part, exercising their rights in an attempt to obtain better terms and conditions of employment.”

Contrarily, Curran explains, Robson’s colleagues and contemporaries in the Winnipeg legal community viewed the General Strike as a challenge to “authority and the existing social order, amounting to nothing short of seditious conspiracy on the part of the strike leaders.”

Robson’s report clearly demonstrates his recognition and understanding of the dire circumstances the workers had reached, which drove them to take such drastic action in May of 1919. “Robson’s views on the nature and extent of workers’ rights to organize, collectively bargain, and strike were consistent with subsequent developments in North American labour legislation, international law, and Canadian constitutional jurisprudence over the next century,” said Curran. “Robson’s sympathy for workers, his understanding of the social, political, and economic context in which they found themselves, and his recommendations were all remarkably enlightened and innovative.  Such enlightenment and innovation demonstrated by Robson is still necessary today, as Canadian workers are even now facing some of the same problems he observed.”

The full text of Robson’s report is available to read online at the University of Alberta Website.

Curran’s paper and other essays on Robson’s life and works will be included in Volume 42 (2) of the MLJ, edited by Dr. Bryan Schwartz and recent Robson Hall graduate, Erik Gusdal. In addition to that volume, the Manitoba Law Journal will soon publish a revised version of Jack Walker’s book,The Great Canadian Sedition Trials: The Courts and the Winnipeg General Strike 1919-1920, which was originally edited posthumously by Duncan Fraser and published in 2004 by the Legal Research Institute at the University of Manitoba. Both of these volumes will soon be available online at the Manitoba Law Journal website.

The University of Manitoba Libraries’ digital exhibit of the 1919 General Strike, Unbreakable: The Spirit of the Strike, is available to view online.

In the fall of 2022, the Faculty of Law recognized some its sessional instructors, referred to as “Practicing Professionals,” for the long years of hard work they contributed to the education of future generations of lawyers. Practicing Professionals who taught for at least 10 or more years were formally recognized as “Jurists of Robson Hall” and were presented with brass plaques expressing thanks for their dedication.