Professor John Irvine – now officially titled Lord John Irvine of Hougun Manor, has taught generations of law students for the past 50 years at the University of Manitoba’s Faculty of Law. Modest beyond compare, Robson Hall’s resident British gentleman was presented with the Lordship on November 5th (Guy Fawkes’ Day, of all days), at a virtual homecoming event hosted by the Faculty. The online event was attended by upwards of 200 alumni whom Irvine had taught in five decades’-worth of Torts, Property law, Jurisprudence and Legal Systems classes.

Law Faculty communications staff interviewed the kindly professor to learn more about the impact he has had on so many alumni over the years, and to understand cryptic old yearbook photo comments about hay and horses. In a voice Irvine complained resembled a “well-dined” Sir Winston Churchill, Irvine kindly divulged the tale of how he crossed the ocean by boat from England and stayed in Winnipeg for half a century.

John Irvine was born at Leamington Spa near Stratford-upon-Avon and Coventry. He grew up in Kenilworth, Warwickshire, “a very attractive town” full of greenspace, fields, woods, and a ruined castle in its centre. He went to school locally, and at age 10, got a scholarship to attend Warwick School, which is now 1,106 years old and that, according to Irvine, “doesn’t seem to have really produced anyone of particular fame or notoriety in that period of a thousand years plus, except the poet John Masefield [1878-1967], who was expelled for constant absenteeism after a couple of weeks.”

At age 17, Irvine had a choice of attending either Oxford or Cambridge Universities, and chose Oxford because his particular college, Lincoln, “looked a little bit cozier with its medieval rather than classical architecture.”

There, he studied law, because he had no idea what else to do. He had no family background or connections to the legal profession, but chose law over being a school teacher. Law seemed interesting, so he gave it a try – and “got stuck” which seems to be a theme in his life, he mused.

Irvine’s original intention was to practice law but he stopped just short. “Qualifying for the Bar in England is very peculiar,” Irvine explained. “You don’t have to have a university degree at all…. All you have to do is join an Inn of Court, eat a number of dinners in the great hall of one of these four Inns of Court…and be recorded as having been present at such and such a dinner there on such and such a night…it is rather nice. Slightly reminiscent of the dining hall of Hogwart’s.” Then, there are a few exams and voilà – you’re a barrister.

Irvine joined Gray’s Inn but stopped eating dinners about one or two short of the number required to practice law, and instead decided he wanted to see America. So he sailed by ship to Connecticut and was a lecturer for a short while at the law school there.

Getting Stuck at Robson Hall

At the time, teaching at North American law schools was a “good gig” for young British legal scholars, so he set about writing letters to deans at various Canadian law schools, including Dean Cliff Edwards at the modern incarnation of the Manitoba law school which was about to open its new building, Robson Hall, on the University of Manitoba’s Fort Garry Campus.

“He was a man of great energy, vision and principle,” said Irvine of Edwards. “He was also a very kind and decent man. He was the very embodiment of a gentlemanly scholar.” 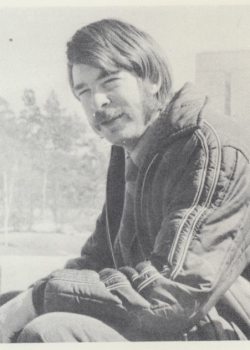 Professor Irvine in his first year of teaching at Robson Hall. Photo, Faculty of Law Yearbook, 1970-71.

Edwards, who in the late 1960s, had been on the lookout to fill the brand-new law building with good legal educators, seemed to have a system of contacts all over the world. Having received Irvine’s letter requesting an interview, he told the young scholar to go and see his colleague Sir Otto Kahn-Freund, a leading legal scholar at Oxford at the time. Over “a great deal of tea and cakes” in Kahn-Freund’s chambers at Brasenose College, they talked for hours about British Birds after which – according to Irvine – Sir Otto proclaimed, “You’ll do,” and sent him off to Winnipeg.

Irvine once again came by ship, this time to Canada in 1970, and taught for 4 years. Missing his family, however, he went back and tried teaching at the University of Birmingham for a year but the pull of personal loyalties and the fact that he couldn’t earn a living wage there, brought him back in 1975 and he has been rather “agreeably stuck” ever since.

Irvine has noted key differences from decade to decade since he first started teaching, the primary of which is that women now form more than half the law student body. “The first one or two were very brave,” said Irvine. “There was a new spirit in the faculty and women have made Robson hall a much more civilised place,” he said.

Another difference within the walls of Robson Hall Irvine notes is that the atmosphere has become more serious. When he first started, “it was more exuberant, and there was more carousing in pubs,” he said in his matter-of-fact way. Irvine recalls the “universal heavy smoking” where students would light up immediately upon exiting the library, and many of the professors smoked pipes.

After all these years, what Irvine most enjoys about teaching is “that moment when the penny drops,” and witnessing students finally coming to understand legal concepts. He also loves doing the old-fashioned kind of research, finding “hidden things” and getting behind the rules of law. 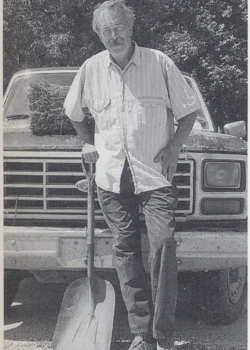 Irvine suspects some of his students and colleagues over the years have thought him eccentric, and indeed, in old yearbooks dating back to his earliest days at the Faculty, students ribbed him – with good humour – about his rural lifestyle. To this day, he lives on an acreage outside of the city with a huge garden and a menagerie of animals. Over the years he has raised six or seven Arabian horses, various cows, poultry and deer, and currently provides housing for a flock of Purple Martins. He also harbours various other birds and monarch butterflies.

“My old mother who passed away just last Christmas at the age of 100, I know what she would say. “Keep your chin up,” she’d say. And the queen, bless her, would say, “Keep calm and carry on.” I think it’s a generational thing you know, they all have these sturdy sayings. It’s good advice but easier said than done in times like this, isn’t it.”

Teaching during the COVID-19 pandemic has posed perhaps the greatest challenges yet for Irvine, yet he carries on. Befuddled by technology, he has muddled through with the help of students, staff and colleagues, and pressed on by pre-recording his lectures and sometimes holding virtual discussions with students using online platforms. His main complaint is not being able to access the library for that hands-on experience of being able to hunt through the text and discover those “hidden things” he so loves.

Currently, Irvine has found encouragement in the “extraordinary resilience of the students” that he has seen, and as parting words of advice, would like to say to students, “this is a kindly faculty. We’re not out to get you or rub in the fact that your work may not be of the same degree of polish and exhaustive detail as has been possible in previous years. You’re carrying a much heavier burden. You’ve got a tougher row to hoe than previous years have had, and my impression is you’re handling it very well and cheerfully. Cheerfulness is contagious and that’s what we need at the moment. I think you’re handling a very difficult situation very well.”

Home is where the heart is