Do you ever look at a stamp and wonder where the image came from?

The story behind the Dr. Bruce Chown Canada Post stamp 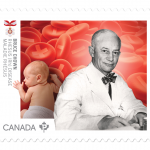 The image of Dr. Bruce Chown on the stamp is from the UM College of Medicine Archives located in the Neil John Maclean Library on the Bannatyne Campus. The stamp celebrates his groundbreaking research of Rhesus (Rh) disease, and his later co-founding of the Rh Institute in Winnipeg.

After serving in WWI with the Canadian Army from 1915-1919, Chown entered medical school at the University of Manitoba. Flipping through the University of Manitoba Brown & Gold Yearbooks from 1920/1921 and 1921/1922, you’ll see a young Chown heavily involved in extracurricular activities, including the U.M.S.U Debating Executive, the Inter-Provincial Debating team, one of the editors of the student newspaper the Manitoban, and the Manitoba Medical Student’s Association Executive.

He graduated with his MD in 1922. See the gallery below more photos from the archives, including his graduating photo in the 1921/22 Brown & Gold Yearbook.

Chown’s far-reaching influence can be seen in a Winnipeg Tribune photograph about the Chown Guild that also honoured his father, a surgeon at the Winnipeg General Hospital (now HSC), who was also the Dean of the Manitoba Medical College (1900-1917). His records are also held at the College of Medicine Archives.

A photograph [7 of 7 in the photo gallery] of Dr. Bruce Chown being observed by Madeline Dudley, Mrs. W. S. Ferguson and Mrs. James Tate, all members of the Chown Guild of Children’s Hospital, was taken June 14, 1958 in the Women’s Pavilion laboratory at Winnipeg General Hospital and published the next day in the Winnipeg Tribune Newspaper. [Photo: University of Manitoba Archives & Special Collections, Winnipeg Tribune fonds (A1981-012), PC 18, Box 3, File 73, Item 3]

Watch the Canada Post video about Dr. Chown’s legacy to see various photos of Chown from the College of Medicine Archives. Additionally, you’ll see photos of Dr. Chown with Marion Lewis and Hiroko Kaita, who worked closely with Chown at the Rh Laboratory and continued working and publishing well past his retirement in 1977.

We also have the Marion Lewis’ collection at the UMLibraries Archives & Special Collections on the Fort Garry campus.

One comment on “Do you ever look at a stamp and wonder where the image came from?”