Practical examples of how Indigenous peoples around the world are breathing life into the carefully chosen words of the United Nations Declaration on the Rights of Indigenous Peoples are now available online. 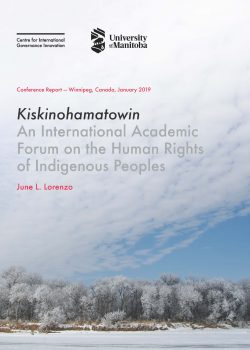 The Kiskinohamatowin report is based on a conference hosted by University of Manitoba Law Prof. Brenda Gunn and consultant Celeste McKay in 2019.

“The Kiskinohamatowin report can serve as a handbook for groups interested in learning what worked and didn’t work in other parts of the world while designing their own implementation projects,” Gunn says. Nine years ago, she wrote the original handbook on understanding the declaration.

Story submitted by the Centre for Human Rights Research