The following notes are from A Eulogy for Art Braid given by Dr. Bryan Schwartz at St. John’s Cathedral in Winnipeg, March 6, 2020.

As you have heard, Art was a dedicated servant of his Church. When he passed away, though, quotes came to my mind from several other ancient traditions.

In the Talmud, Rabbi Shammai says “Say little, do much and greet everyone with a cheerful face.” 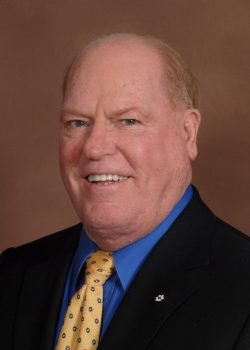 “A cheerful face”: The warm, generous smile that you see in his photograph at the front of the aisle, that was Art.

“Do much:  Art did everything. He was a teacher, scholar, administrator and community leader, husband, father.

“Say little…. No.  You would have to amend the adage in Art’s case so that it begins: “Go ahead, say what you have to say.”

The Stoic philosopher Epictetus said that you should welcome your adversities. If Hercules had not been required to battle monsters and criminals, he would have rolled over and stayed in bed. Instead, he turned himself into a hero.

I remember Art telling about when he was a young man in the polio recovery ward. He watched as some recovered fully from the initial devastation of the disease. In time, some recovered fully, but some remained fully incapacitated. He wondered how it would be for him. Some of his physical capacity came back, but then the recovery stopped.  He told himself “Well, that’s it, you have to get on with it.”

The still photograph of my imagination, when I thought of Art and his passing is almost exactly the one you see here in the mounted photo at the head of the aisle: that warm, generous, genuine smile.

The video: Art at a meeting, weighing in in the midst of contention, taking off his reading glasses, waving them around, pounding that same hand on the desk and pronouncing his understanding of the truth.

An encounter I had with Art that best epitomizes him occurs in 1995.  The scene: We are in the middle of the University of Manitoba Faculty Strike. Emotions are intense on both sides. The tension is not only felt on campus but among students, their families, and throughout the province.

At issue was a management proposal: to acquire the power to lay off individual faculty members for economic reasons. We employees feared the power would be abused. Dissidents would be punished, sycophants would be rewarded. The proposal had the immediate effect of turning a number of ordinarily docile employees into quasi-Trotskyites.

Art is serving on the Board of Governors and is Dean of Law.  In my youthful, anti-authoritarian, contrarian intensity, I am among the strike leaders.

Art and I bump into each other in the corridor.

He’s happy to see me.

Even though we are on opposite sides of the strike.  Even though we had in general fundamentally different backgrounds, philosophies and temperaments.

Art was not someone who liked humanity but hated people. He liked people in all their individuality. Your differences from him, your differences with him, they just made you interesting.

We talk about the strike. He takes the view that the Board is just looking for the flexibility, any reasonable employer needs in hard economic times; “management won’t do anything silly”, “So you think we’re just worried about nothing. We’re just being nuts?” I summarized. “Exactly”, said Art.

He wasn’t taking the “trust management” view because it was the party line. You could have a candid sidebar with Art. No, Art genuinely thought well of people. I believe he projected his own character onto others; he was a reasonable and decent person, so he honestly believed that others were the same. That faith helped make him such a supportive and constructive colleague. There is a saying that the test of a true friend is not whether they can commiserate with your miseries but whether they can enjoy your success. Art was happy whenever his colleagues or his students thrived, and he tried to help make that happen.

Art could have avoided talking to me about the strike and chattered with me about sports. Instead he was happy to engage about the strike. He loved a good argument. He enjoyed the personal interplay. He also loved the dialect process, the intellectual back-and-forth. That’s why he was an enthusiastic participant in board games like crokinole and chess. When he was aptitude-tested before law school, the expert told him “law”. You can take a principle and interpret it forty ways, a fact pattern and interpret it forty ways, and apply the facts to the law in sixteen hundred ways. Art loved to hear the different takes and work his way through to his own conclusions.

I remember on another occasion Art telling me he was headed off to a two-hour administrative meeting. I said it sounded like descending into the one of Dante’s circles. He responded that he was looking forward to it; this was going to be fun.

All these years later, I can tell you exactly, in a few words, what position Art took on the strike. That is because he had a gift for expressing his views succinctly and memorably. If you read the oral history he did for us at the Manitoba Law Journal, you’ll see that he did not merely intuit his opinions; he earned them. He read widely, considered alternative viewpoints, and studied what was being done in practice all over the world. A senior colleague of mine told me, while I was preparing this talk, that some people underestimated Art’s intellect. He avoided legal jargon, bureaucratic bafflegab, and post-modern academic obscurantism. His ability to express his reasons and conclusions in a few simple, precise and clear words was in reality the mark of a truly superior mind.

At the Manitoba Law Journal, we have been trying to preserve voices. If you read the interview we did with Art, his life and career perspective, I think you’ll get a better sense of Art than anything I can tell you here.

Art says in the interview that the most important thing for him as a professor was being a teacher, the classroom experience, not scholarship. You’ll see why he was good at explaining legal doctrines, and more importantly, in his view, introducing students to the process of legal reasoning – a skill that remains as particular rules come and go.

It may be that Art’s most profound lesson as a teacher was more subtle. It was about living your life. He was not a pretentious, self-promoting or preachy individual. In this respect, he taught by example.

An expression used about overcoming obstacles is “grim determination.”

But it was not grim.

Instead, it was imbued with good faith, good will, good intentions and good humour.

It is a sad honour to be speaking to you today. It was an honour for me, for almost forty years, to have served with Art as a colleague and friend.