The Tokyo 2020 Olympic Games are set to run from July 23 to August 8, 2021 and the University of Manitoba will be well represented with many members of our community taking part as athletes, coaches and officials in this year’s highly anticipated event.

“The University of Manitoba community is deeply proud of the UM athletes and coaches representing Canada in the Tokyo Summer Olympics,” said UM President and Vice-Chancellor Michael Benarroch. “We look forward to cheering them on as they demonstrate the skill and perseverance required to compete at such an elite level. I congratulate them on their success so far and wish them a safe and incredible Olympic experience.”

Meet the UM contingent heading to the Tokyo 2020 Olympic Games!

At 22 years old, UM student and Bisons swimmer Kelsey Wog has made her mark and is continuing to redefine success in the pool. After winning the 100 metre breaststroke at the Canadian Olympic Swimming Trials with a personal best record, she secured her position on Team Canada for Tokyo 2020.

Wog was also named the 2020 U SPORTS Female Athlete of the Year, recognizing her excellence as an athlete, a student and as one of Canada’s leaders. 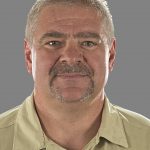 Wog’s coach, Vlastic Cerny, is an Olympic veteran and has been the head coach of the Bisons swimming program since 1993.

Cerny competed for Canada at the 1988 Summer Olympics in the butterfly and freestyle events. In 2021, the duo is eager to come out on top. 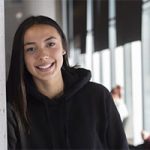 Skylar Park’s childhood dream has always been to win an Olympic gold medal. One year after qualifying for Tokyo 2020, she is now days away from making that dream come true. Surrounded by a family of taekwondo masters, training and competing in the martial art was the natural path. Park’s love for the sport comes from her family’s lifestyle; her father, Jae Park, is also her coach.

Her exceptional performance at the 2016 World Taekwondo Junior Championships was just the beginning. Since then, Park has competed in international events and won multiple medals to add to her career achievements. Now as a 21-year-old Olympic athlete and Kinesiology student at UM, she is aiming for greatness. 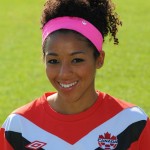 Two-time Bronze medalist Desiree Scott earned both medals as a midfielder with the Canadian women’s soccer team in the 2012 and 2016 Olympics. Scott was instrumental in every minute of Canada’s six matches in 2012 – her Olympic debut. She is returning to Olympic soccer for the third time this summer.

As a UM graduate, Scott is the first Bison to be inducted into the Canada West Hall of Fame in 2019 to celebrate 100 years of university sport in Western Canada.

Sanders, a former Bisons setter with the men’s volleyball team has been a member of the men’s indoor national volleyball team since 2011. After a fifth place finish in Rio in 2016, Sanders is pursuing his Olympic dream for the second time in Tokyo. Follow Sanders on Instagram. 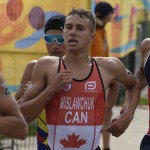 Tyler Mislawchuk made his Olympic debut in the 2016 Rio Olympics, finishing 15th in the men’s individual race. The former Asper School of Business student is also the first Canadian in the history of triathlon as an Olympic program to win the Olympic test event.

From completing his first triathlon at age 15 to representing Manitoba on the world stage at age 26, Mislawchuk will make his second Olympic appearance and compete in the men’s triathlon on July 26.

Check out the schedules for UM athletes competing here. 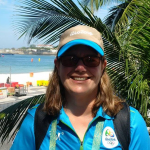 Kelly Mahoney has participated as an Olympic official in two previous years – as a transition official in Beijing 2008 and as the chief venue control officer in Rio 2016. For Tokyo 2020, she will be the head referee in the triathlon events. Mahoney is a UM alumna and is now the Director of the Career Development Centre in the Asper School of Business.

Read more on Mahoney’s experiences with the Olympics. 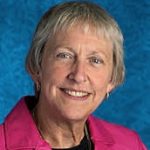 Technical officials have a crucial role in sporting events, especially in the most elite sporting event in the world. Jane Edstrom, who is practicum advisor for teacher candidates in the Faculty of Education, will be one of the few Canadian track and field technical officials assigned to the 2020 Summer Olympics. She was also one of two Canadian technical officials in the 2016 Summer Olympics in Rio. Edstrom is Chair of the National Officials Committee of Athletics Canada. For 16 years, she has been an International Technical Official (ITO). There are only 36 ITOs in the world and they have to re-certify every four years. 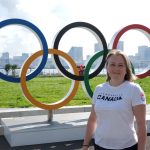 Klassen is an athletic therapist and UM alumna who works with Team Canada’s karate and weightlifting teams. This will be her first Olympics.

Prior to the current accredited Athletic Therapy programs, Klassen had to complete a related degree and a 1200 hour internship program at UM where she was the student athletic therapist for women’s basketball and men’s hockey. 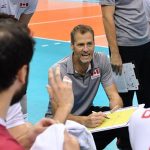 Former Bisons volleyball superstar, Dan Lewis who won the 1996 CIAU (now U SPORTS) Championship with the Bisons will be in Tokyo as the assistant coach of the men’s national volleyball team. Lewis was a long-time member of the team he now coaches winning bronze medals at the 2001 and 2011 NORCECA Championship and 2015 Pan American Games.