Anuprita Kanitkar and Kavisha Mehta demonstrate some of the custom-designed tools used with a motion-detecting computer mouse to enable their computer game-assisted rehabilitation platform.

A new collaboration between the University of Manitoba and SDM University in Dharwad, India is using computer games to enhance rehabilitation for children with Cerebral Palsy (CP) and acquired brain injuries in both Canada and India.

PhD candidate Anuprita Kanitkar initiated the partnership after moving to Winnipeg to pursue a master’s degree in physical therapy at the College of Rehabilitation Sciences, Rady Faculty of Health Sciences in 2011. While studying with Dr. Tony Szturm, professor of physical therapy, Kanitkar became interested in his research into the use of video games as a rehabilitation tool.

“Right after my thesis defense, I returned to India to visit my family and spent some time with Dr. Sanjay Parmar and his graduate students at the SDM College of Physiotherapy and we discussed forming a collaboration with Dr. Szturm,” she said.

Szturm’s team uses a small 3 cm x 3.5 cm motion-detecting remote computer mouse that can be attached to any object – such as a ball, salad tongs or custom-made creations like a three-foot tall joystick – to target training to specific areas that need treatment.

“This one mouse allows us to instrument any physical object we want to play any computer game,” Szturm said, noting the objects have a broad range of properties like size, shape, weight, texture and functional demand. “This approach is directed towards recovery of manual dexterity.” 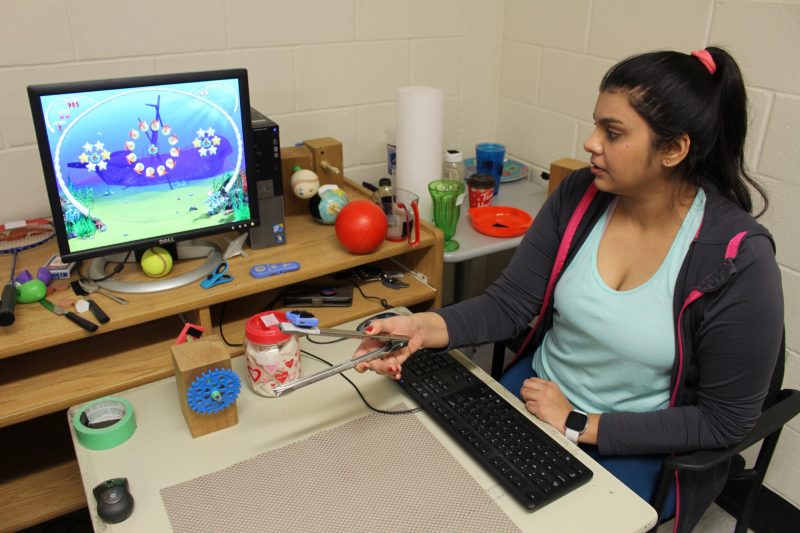 Anuprita Kanitkar demonstrates how objects like salad tongs can be used in the video game platform to target rehabilitation to specific areas that require treatment.

The team has access to over 300 games that can be used for therapy. Szturm and students from the Faculty of Engineering also developed their own game with inbuilt assessment and analysis software that can track mouse cursor movement. While the commercially available games are good for therapy, the purpose-built game can be used to measure patient progress, like response time, movement time and movement accuracy.

“The game is fully configurable for even the most severely affected individuals,” Szturm said.

Kanitkar came to the U of M one year after her husband, Vedant Sakhalkar, who also had studied with Szturm. She attained her master’s in 2014 and began working toward her PhD in 2015. For her PhD, she spent two four-month periods at SDM on clinical trials using Szturm’s platform.

While presenting her study at the Indian Association of Physiotherapists’ national conference in 2016, Kanitkar attracted the interest of SDM physiotherapy student Kavisha Mehta. After working for a year as a pediatric physiotherapist, Mehta moved to Winnipeg to join Szturm’s team and work toward her master’s degree.

Mehta is currently working on a study of the feasibility of using the games to treat children with balance and gait issues related to CP. During a recent exchange at SDM, she set up a training platform, conducted preliminary tests and recruited participants for a tele-rehab study. 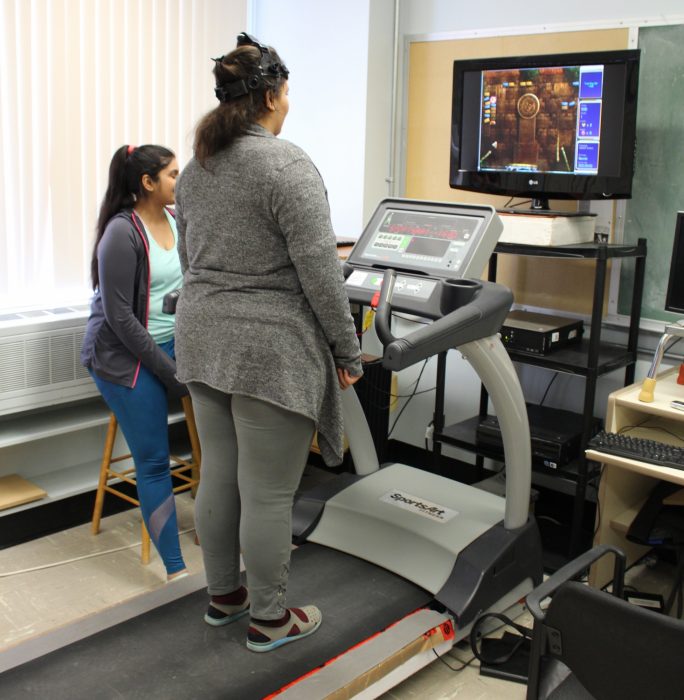 In November 2019, she presented her study on computer game-aided balance rehabilitation at the National Conference of Commonwealth Association for Health and Disability in Kolhapur, India, winning first prize in the conference’s paper presentation category.

She hopes this designation will help attract funding to get the platform – which combines the game-aided technology with a treadmill and pressure mat – into remote clinics in India.

“The majority of India’s population resides in rural areas and most of the affected population comes from low socio-economic status, so affordability of the treatment is a major concern,” Mehta said.

Szturm said that because game-aided treatment is portable and can be inexpensive, it could go a long way helping people in northern and remote areas in Manitoba as well.

“That’s the goal, but we need to keep it affordable,” he said. “The beauty of this system is the technology is already in place, but it also needs to be monitored and supported. If we can prove this works, then third-party insurance companies and government will take notice.”

Funding for travel for Kanitkar was provided by a Mitacs Globalink Research Award and Queen Elizabeth Scholarship Travel Award. She and Mehta were partially funded by Faculty of Graduate Studies Conference Travel Grant for presenting their work at conferences in India.