The Smart Suite isn’t built yet but Dr. Amine Choukou can navigate the space in virtual reality until it is constructed.

One of the projects is aimed at creating a future where older adults will be able to live on their own longer thanks to sensors in their homes that track their health and help in their day-to-day lives. The other research team is developing a robotic device that patients with motor impairments will use to control a video game while simultaneously performing rehabilitation exercises.

The focus of the fund is on innovative collaborative research in the areas of telepresence, telehealth, telemonitoring and assistive technology.

Dr. Jacquie Ripat, research lead, College of Rehabilitation Sciences, Rady Faculty of Health Sciences, said that the two projects selected have the potential to be transformative.

One research team is working to create a computer platform that they hope will one day help adults live on their own well into old age.

The computer platform is for the Smart Suite that’s being constructed by University of Manitoba researchers. The Smart Suite is a replica of living quarters and will be equipped with a variety of sensors to monitor the activities of people in the space.

Sensors inside the Smart Suite will include, for example, Doppler radar, motion sensors and smart floor mats equipped with pressure sensors. The sensors can monitor activities like time spent standing in the kitchen, frequency of hand-washing  and the distances walked at home on an average day.

The research team is creating a computer platform to compile and analyze all the data from the sensors in the Smart Suite, said Dr. Amine Choukou, assistant professor of occupational therapy, CoRS.

“We’re building the brain of the Smart Suite,” he said.

After completing studies in the Smart Suite, the goal is to move the technology into people’s homes, Choukou said. The data collected in one’s home will train the computer to spot anomalies in a person’s behaviour, like if they stop bathing or cooking. The system could also alert emergency services and caregivers if a person falls.

“This is a huge market and a huge health cost reduction for the government,” Choukou said. “If we keep people at home, they can live independently for as much time as possible and we will avoid sending them inappropriately to long-term care facilities.”

Choukou also sees a future where doctors will gain access to the data collected in someone’s smart home. The doctor could review sleep patterns or look at how much time is spent standing or sitting down in front of the TV or computer and make recommendations, he said. Activity monitoring should be considered as a medical prescription preceding any decision to relocate an older adult to a long-term care facility, Choukou said.

Another team that was awarded CIRF funding is developing a robotic device, called a manipulandum, which enables a patient with limited hand or finger mobility to control a video game while performing rehabilitation exercises. 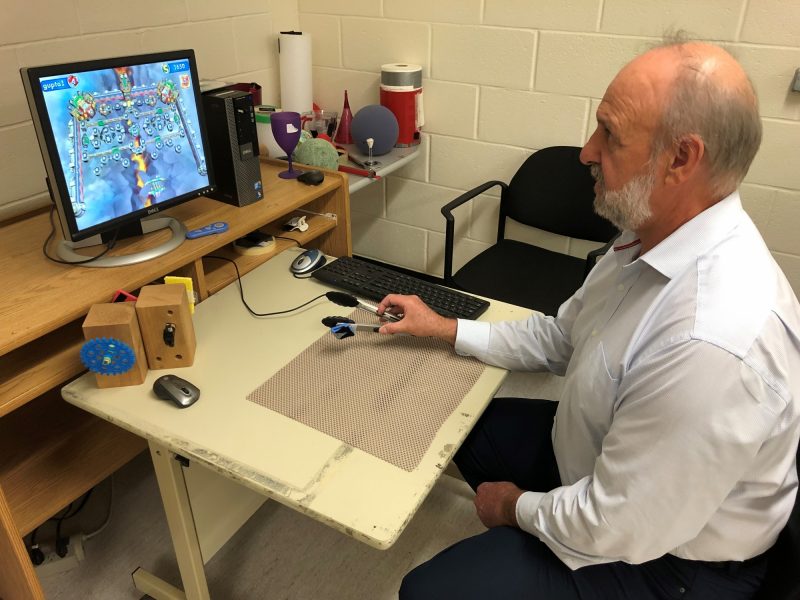 Dr. Tony Szturm plays a video game using a pair of kitchen tongs as a controller. The movement acts as a rehabilitation exercise. His team is working on a robotic device people will use to control a video game while performing hand and finger exercises.

“I think the idea of having a smart manipulandum controller is very novel,” Szturm said. “It applies to a lot of different patient populations. The arm and hand function is really important for people and I think it’s something that is neglected otherwise.”

Szturm said another advantage of using video games as part of rehabilitation is the data generated from game play. The data can reveal patient progress like response time, movement time and movement accuracy. These stats could support changes to the rehabilitation regime.

The goal is to create an affordable model that patients will turn to in their homes, he said.

“As we prove that people will actually use this at home, then insurance companies and the government are going to say ‘OK, let’s do it.’ If patients don’t do this and if they don’t get better, we have to provide them home care which is way more costly for years and years and years,” he said.

Szturm is a member of the research team, which received $32,000 in CIRF funding, alongside Dr. Nariman Sepehri, professor of mechanical engineering, Faculty of Engineering; and Dr. Rasit Eskicioglu, associate professor of computer science, Faculty of Science.