Trench fever was a common disease during the First World War. In this photo, troops of the Australian 10th Brigade who had been in the front line trenches for several days get a foot inspection. Photo courtesy: Australian First World War Official Exchange Collection

Trench fever found among urban people who are homeless

A disease common during the First World War, trench fever, has been found in some urban populations experiencing homelessness in Canada, and physicians should be aware of this potentially fatal disease, according to advice published in a practice article in Canadian Medical Association Journal (CMAJ).

The article describes a 48-year-old man who visited an emergency department in Manitoba with chest pain and shortness of breath. In the previous 18 months, the patient had sought care for episodes of chest pain and body lice infestation.

Bartonella quintana is a bacterium that is transmitted by body lice and causes a disease called trench fever, which killed millions of people during the First World War. It can lead to an infection of the heart, known as endocarditis, that can be fatal if untreated. 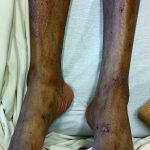 Trench fever in a Manitoba patient. Carl Boodman/ CMAJ. (Informed patient consent obtained for publication of the case and pictures)

“Our public health message is that this disease is present in Canada and that people and physicians aren’t always aware,” says Dr. Carl Boodman, UM infectious disease physician. “It’s associated with homelessness and homeless shelters, and physicians should consider B. quintana infection in people who are unwell and have a history of body lice infestation.”

The authors are aware of only four other cases in Canada over the last 20 years.

Symptoms of trench fever include fever, headache and malaise. It can be difficult to detect, requiring molecular testing and consultation with infectious disease experts.

“Clinicians should consider Bartonella serology, echocardiography and infectious disease consultation when caring for individuals who present unwell with a history of body lice infestation. B. quintana infection likely remains underdiagnosed,” Boodman and his co-authors conclude.

“Endocarditis due to Bartonella quintana, the etiological agent of trench fever” was published December 7, 2020.

Listen to a podcast about this study.