The university in wartime

Over eighty years ago, Hitler’s armies invaded Poland, thrusting the world – and the U of M – into the Second World War.

Although classes continued, campus life was markedly different from 1939-1945. During this important anniversary, we offer a glimpse of our university during wartime – including the sacrifices and contributions made by students, faculty and alumni.

Compulsory military training was enacted by the Canadian government in the summer of 1940. All physically fit male students aged 18 or over were required to take 110 hours of military training each academic session.

By 1943, when the Allies’ prospects were grim, the university added an Air Training Corps and a Naval Training Unit. Students who wanted to enlist in the Canadian Navy trained on the Pacific Coast during the summer and on HMCS Chippawa during the school year.

University students in the Naval Training Unit in 1944.

At the outbreak of war, Golden joined the University of Manitoba Training Unit and COTC where he served as Second Lieutenant and lecturer in Military Law. 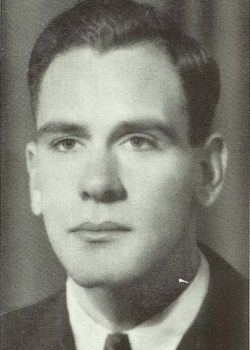 He won the prestigious Rhodes Scholarship in 1941 but could not attend Oxford due to the war in England. Instead, Golden enlisted in the Canadian Army upon graduation. He joined the Winnipeg Grenadiers as an intelligence officer and rose to the rank of Captain. On Christmas Day, Golden and 1,684 Canadians were captured by the Japanese in Hong Kong and lived as prisoners of war for three years and eight months where they endured forced labour, starvation and torture.

Once liberated, Golden took up his scholarship at Oxford. He briefly practiced law in Winnipeg and taught at the U of M Law School before joining the Department of Defence Production with the federal government. 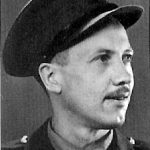 At the outbreak of war, Pickersgill was taking graduate studies in philosophy in Paris. He was captured by invading Germans and imprisoned for two years as an enemy alien. He escaped by duplicating an officer’s key and cutting through barred windows with a blade smuggled into a loaf of bread.

Safe in Britain, he joined the Canadian Army and was seconded to the British Special Operations Executive. Trained in espionage, he parachuted into France to help bolster resistance movements there. Pickersgill was betrayed, captured and tortured by the Nazis but refused to give up Allied secrets. He was executed at Buchenwald concentration camp on Sep 14, 1944, aged 29.

All hands on deck

Female students were not exempt from compulsory training during the war. For at least two hours a week, the Womens’ War Work program trained students for key roles in emergency situations.

Motor Mechanics prepared women for work as ambulance drivers, while Home Nursing trained students to be capable assistants in the case of epidemics or a nursing shortage. The Canteen course instructed students how to feed large groups in industrial canteens, and was perhaps the least-favoured class.

“How would you like to peel carrots and onions for five hours for hungry service men? But still these girls are doing it willingly because they feel they are doing something worthwhile, and so they are.” ~ Brown & Gold yearbook, 1945

Parker was president of the U of M’s Women’s Association during the early war years. Under her leadership, Red Cross depots were established in every faculty where students made comfort items for soldiers, including socks and other sewn articles. 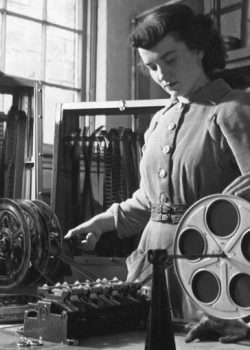 After graduating, Parker joined the National Film Board (NFB). She wrote and directed documentaries about the effects of war at home, including the importance of nutritious meals in the face of wartime food shortages, and the value of day nurseries for children as their mothers worked in munition factories. She became head of the NFB’s Education Film Unit in 1944, and founded Parker Film Associates in the early 1960s.

Parker’s is regarded as a pioneer of the Canadian film industry for her humanistic style of filmmaking. Her films were nominated for an Oscar and Cannes; she won a BAFTA for Royal Journey about the future Queen Elizabeth’s first trip to Canada. In 2005, she was made an Officer of the Order of Canada.

Entertainment, as good as medicine

Faced with traditional coursework and additional wartime duties, students and faculty had precious little free time. Yet, it was vital that morale remain high.

The Manitoban redefined its editorial policy for 1939-1940 to heavily promote drama, debating, Glee Club and sports, to “preserve and intensify the Canadian way of life”.

The University of Manitoba’s Symphony Orchestra was established that year to great public interest: they performed at Eaton’s, the YMCA and Children’s Hospital. UMSU’s Glee Club staged the Gilbert and Sullivan play “HMS Pinafore”, a satire of the British Navy set in the 1800s.

Athletic programs were severely hampered during the war years. Social events like roller skating jamborees and ice carnivals were held instead of inter-faculty competitions, to the interest of many on campus: in 1941, the University Bowling League was believed to be the largest in the world with over 400 active participants.

At the start of the war, Parker was editor of The Manitoban and took on what he described as “the gigantic task of interpreting the relationship of the university and community.” His success with both content and managing the largest staff (at the time) in the paper’s history would lead to a lengthy career in journalism. 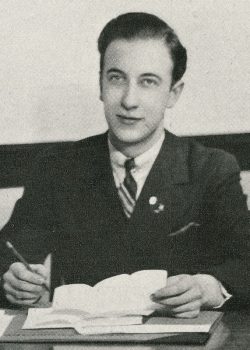 He worked as a reporter for The Winnipeg Tribune and the Montreal Star after graduating, then joined the government department of munitions and supply. War-related industrial achievement stories were in vogue and Parker’s out-of-the-box ideas generated great press. His publicity stunt for the first Canadian-made Avro Lancaster bomber saw it fly direct from the news conference in Malton, Ontario, to bomb Berlin, then return to Canada unscathed. The NFB captured this maiden voyage in its documentary Target Berlin.

In 1950, Parker founded the now-renowned Ryerson School of Journalism, which he led for two decades before starting his own public relations firm. Parker died in March, 1988, aged 70.

For more insight into the U of M in wartime, you can visit the digital collection “War and the Military” from the university’s Archives & Special Collections.