Notes on the passing of Dr. Chris Johnson

Chris Johnson made an enormous impact during his more than four decades at the University of Manitoba during which he taught and directed thousands of theatre students. In fact, in “retirement” he continued to direct current and former students in productions at UM and at the Winnipeg Fringe Festival. He was quite simply dedicated to the practice of theatre in Winnipeg and to the continuing practice and improvement of all his students. 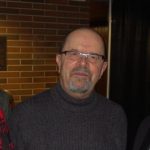 During his tenure, the former Black Hole Theatre Company (now the John J. Conklin Theatre at the Gail Asper Performing Arts Hall) produced hundreds of productions (of which Chris was personally involved in over one hundred). In recognition of his work in the department of English, theatre, film & media, Chris was named Professor Emeritus. In recognition of his contribution to new Canadian and Manitoban theatre, the Manitoba Playwright’s Association established the Chris Johnson Award for Best Play by a Manitoba Playwright in 2014. In recognition of his profound contributions as a teacher, Chris received the 2018 Theatre Educator Award from The Evies (Winnipeg Theatre Awards).

Practitioners too numerous to mention, many education students who went on to teach theatre throughout the province, and countless others who continue to enjoy life in the theatre, began their journey with Chris Johnson as their most dedicated guide. All of us in the theatre program, all of us who worked in the Black Hole, know what an excellent collaborator Chris was, what a warm, generous and open man he was. He will be dearly missed.

A student once asked Chris what to do with the empty nostalgic feeling after closing a production. Chris told him “to take a deep breath and start preparing for your next show.”

Chris Johnson began his career at UM in 1979. For over forty years he dedicated himself to theatre education, creation, and performance. Most colleagues would know him best for his development of practical theatre courses in the theatre program and his founding of the Black Hole Theatre Company, named for the small black box theatre in the basement of University College. Chris was also a theatre scholar, contributing articles to the Canadian Theatre Review, and writing encyclopedia entries on theatre, on playwrights, and on histories of production in Manitoba and Canada. The playwright to whom he devoted most of his academic attention was George F. Walker. Chris published many pieces, including a book, on Walker, and complemented that scholarly consideration with creative attention, bringing Walker’s work to the stage in the Black Hole Theatre and then in the Conklin Theatre, a space for which Chris spent over thirty years advocating.

We in English, theatre, film & media express our deepest condolences to Chris’s family and friends even as we register our own loss. The image of Chris standing with his arms folded, looking slightly skeptical just before delivering a wry and funny comment, or laughing loudly enough to fill a prop room with his joy at all things theatrical, will stay with us all.

Chris Johnson taught me to act for theatre in a couple of sentences. “You are bringing something from film. You can act with your eyes. But here your eyes are the cherry on the cake. You have to act with your whole body for the whole stage. You have to be heard and seen. Every inch of you is on the stage. You can’t hide.” He also told me not to hide my accent. He told me to use it as my signature. That meant a lot to me. He had an immense impact on how I carried myself on stage from then on. For plays, for music, and whatever else. I knew I could not hide so I might as well claim the space.

Chris had an enormous impact on the theatre community and I’m sad to hear of his passing. He was always a caring, kind teacher who will be missed.