Holberg Inlet, along the north shore of Vancouver Island, is a rich site for Cretaceous flora. (Az Klymiuk), Author provided

This article by Az (Ashley A.) Klymiuk is republished from The Conversation under a Creative Commons license. Read the original article.

Until recently, it was assumed that most major lineages of seed plants had been recognized in the fossil record. Their evolution and relationships to one another are still being debated, but few botanists believed that we might still be missing wide swathes of vascular plant diversity.

Using fossils from this site, my colleagues (paleobotanists Gar Rothwell and Ruth Stockey) and I have been challenging the assumption that the plant fossil record is largely complete. Our recent discovery of a new genus of non-flowering seed plants illustrates that researchers’ understanding of seed plant diversity in the Cretaceous is by no means complete.

In Apple Bay, sandstone and siltstone beds tilt gently up, variably exposed with every falling tide, and giving few clues as to their scientific significance. This site is a konservat lagerstätte: a fossil locality with exceptional preservation.

During the Early Cretaceous (about 136 million years ago), seasonal storms and flooding events swept vegetation out into a marine basin. Plant debris rapidly settled and fossilized at a cellular level of detail. This type of fossilization is called permineralization.

Permineralized plants offer a wealth of anatomical information, enabling us to ascertain features of plant development, organography (the arrangement of plant organs) and reproduction — data critical for understanding plant evolution. In the two decades we’ve been studying Apple Bay, it has become apparent that this site contains the most comprehensive record of terrestrial vegetation immediately prior to the evolution and radiation of angiosperms (flowering plants).

A mere five to 10 million years after the Apple Bay flora settled into marine sediments, angiosperms were becoming abundant in the fossil record. Through the Late Cretaceous, they came to dominate terrestrial landscapes. 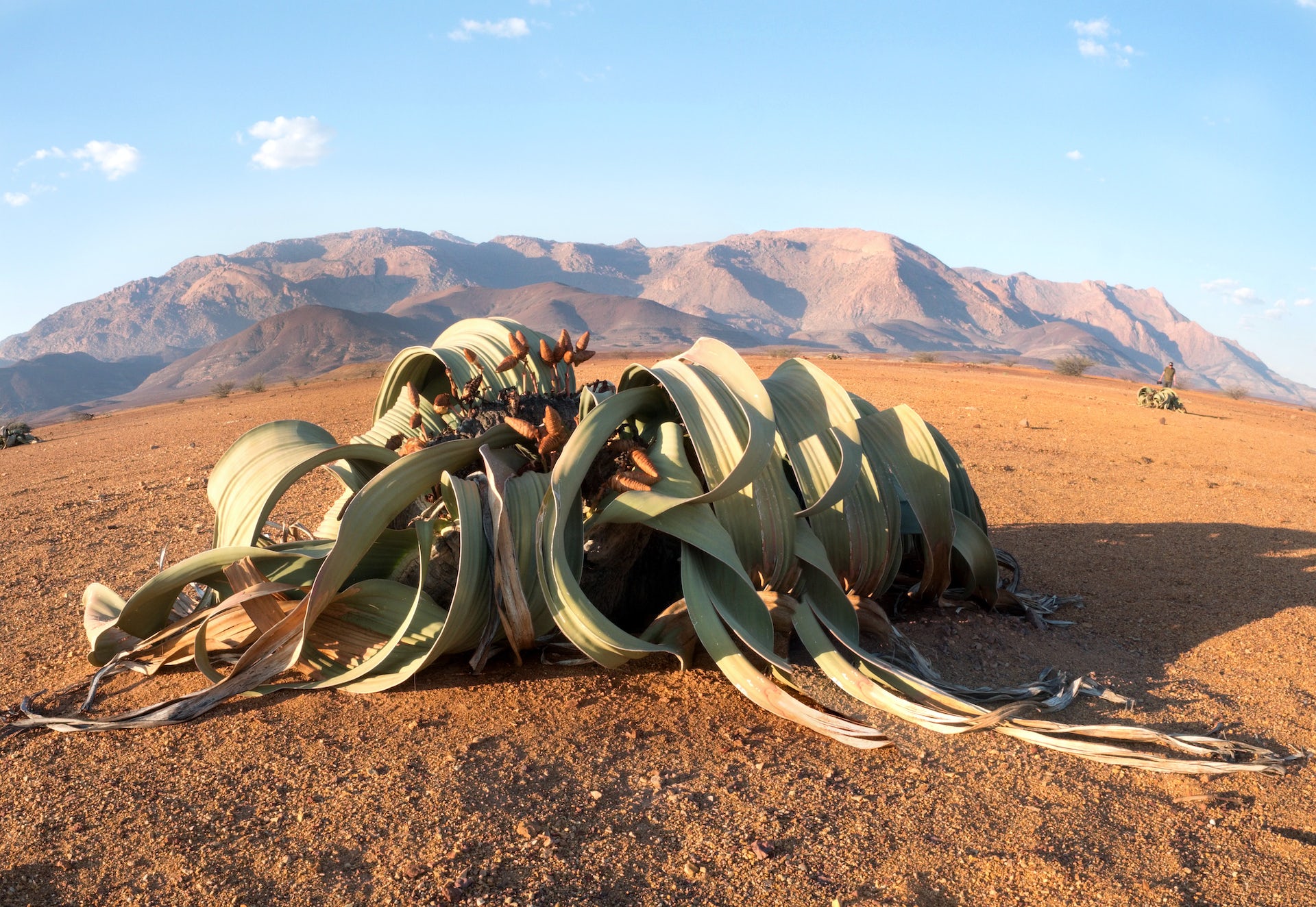 Welwitschia mirabilis, a type of non-flowering seed plant, in the Namibian desert. (Shutterstock)

The vast majority of seed plants that have ever lived are now extinct. The gymnosperms that are still alive are themselves relics of a much greater fossil diversity, and many major lineages of seed plants are known only from the fossil record. The permineralized plants of Apple Bay demonstrate that seed plants were even more diverse throughout the Cretaceous than botanists had previously realized.

Gymnosperms are well-represented in the Apple Bay flora. They include conifers and gnetophytes, which still have living exemplars like Welwitschia. They also include bennettitalean and doylealean plants, which represent wholly extinct orders. Indeed, the extinct Doyleales were first described from Apple Bay in 2009, and have subsequently been found in Mongolia as well.

The new plant, Xadzigacalix quatsinoensis, probably also represents yet another order of extinct plants. The name is a nod to Kwak̓wala-speaking First Nations — the Apple Bay locality occurs within traditional and unceded territory of the Quatsino First Nation. Xadzigacalix derives from xa̱dziga, a Kwak̓wala word for plant resin, and calix, which is Latin for chalice. The name reflects the resinous, fleshy cupule that surrounds and protected the seeds of the Xadzigacalix plant.

The seeds of this plant have complex three-layered seed coats and were produced at the tip of a woody stem. A cupule encloses most of the seed, except for a narrow tube through which the embryo would have been pollinated. This organography, along with anatomical features like vascular tissue that are observable at a cellular level, constitute a novel combination of features not found in any other lineage of plants.

It’s not yet clear which group of seed plants actually gave rise to the angiosperms. Xadzigacalix likely represents a new order of seed plants, perhaps distantly related to gnetophytes or angiosperms. While research in plant molecular systematics (a discipline that uses genetic data to understand plant relatioships) has resolved most evolutionary relationships within flowering plants, their origins and nearest relatives remain mysterious. 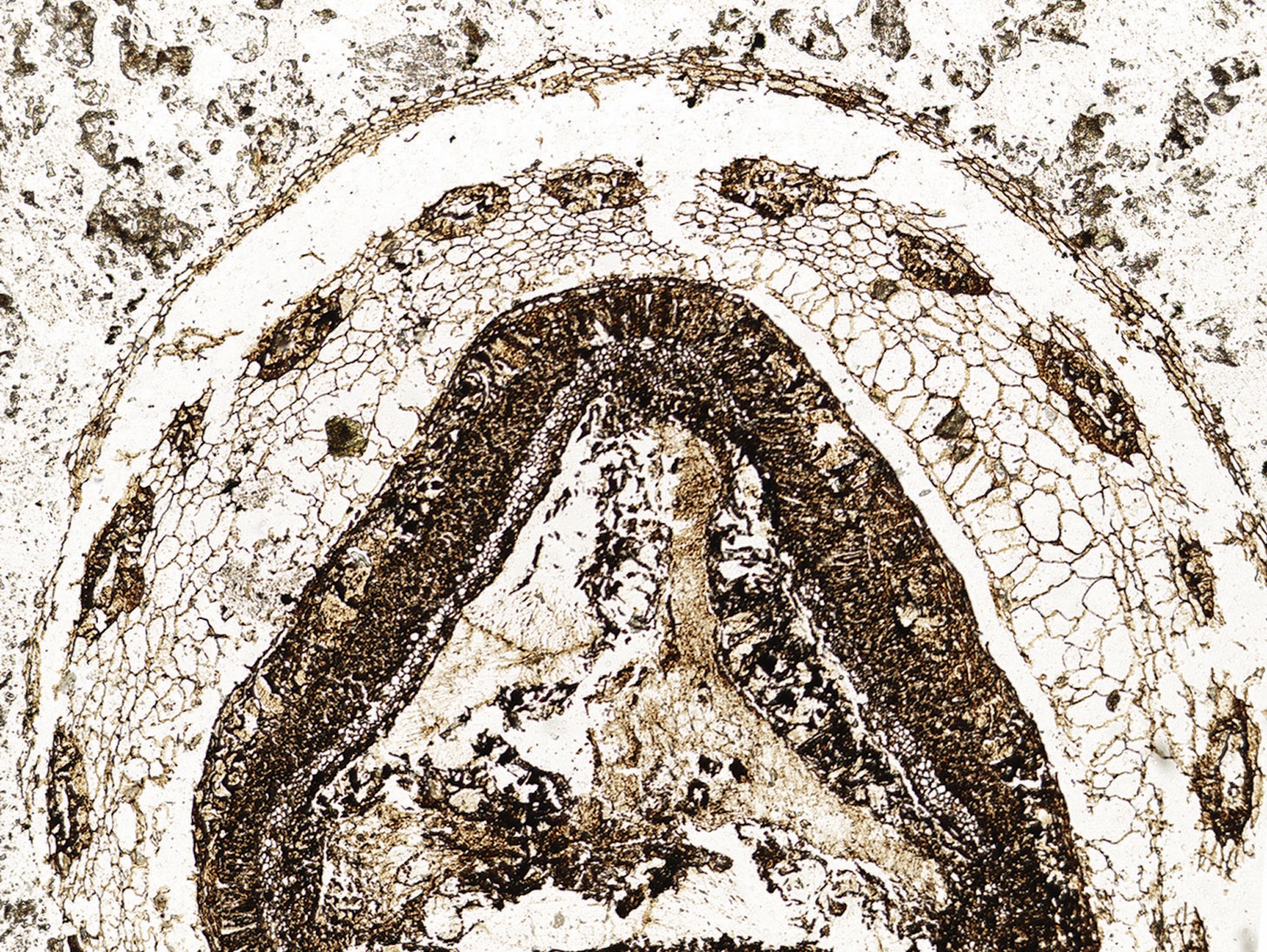 Part of this problem is that the group of seed plants most closely related to angiosperms is almost certainly extinct. Several major groups of cupulate Mesozoic gymnosperms, sometimes called corystosperms or seed ferns, have been suggested as possible relatives of angiosperms. The Xadzigacalix plant is yet another possible contender to the broader “family tree” of flowering plants.

Our assessment of the evolutionary context of the Xadzigacalix plant led us to re-evaluate the other groups of plants frequently suggested as angiosperm relatives. Throughout the Mesozoic, many seed plants “experimented” with an array of different seed-enclosing structures.

We examined whether these cupulate structures are developmentally derived from leaf or shoot tissues. Across all Mesozoic seed plants, cupules appear to be a case of evolutionary convergence, where different seed plants independently evolved similar features. It’s by no means clear if the cupules of any group are genuinely similar to the carpels — the female organs — of flowering plants.

I believe the reason angiosperm origins remain perplexing is that we still stand to discover the entirety of Mesozoic plant diversity. Our discovery of Xadzigacalix hints at how much there is is left to learn.