Since the University of Manitoba’s Master of Human Rights program welcomed its first students in September, 2019, those scholars have been busy navigating uncharted waters towards obtaining educations that will prepare them for unique careers where they can make a difference. Jessie MacInnis is one of these remarkable students in the inaugural class of 19 scholars who hail from Winnipeg to the United States to Nigeria.

MacInnis calls Halifax, Nova Scotia home where, for the past five years, she has worked as a small-scale organic farmer, annually growing mixed vegetables for direct market sales. She started farming after taking time off to travel in Latin America after completing a BA Honours in International Relations with Minors in Geography and Spanish from Mount Allison University in Sackville, New Brunswick. She had also completed a Professional Certificate program in Food Security at Ryerson University. On her travels, she worked on small, family-run farms. Upon returning to Nova Scotia, she applied for an organic farm apprenticeship and has farmed since then.

“Knowing I still wanted to make political and social activism part of my life,” she said, “I was linked with the National Farmers Union (NFU), a farmer-run member-based organization advocating for progressive agriculture policy in Canada.”

Through her relationships at the NFU, she learned about food sovereignty and the practice and principles of agroecology. “This changed the course of my life,” she said. “In the last couple of years, I have gotten involved with La Via Campesina, a transnational agrarian movement made up of millions of peasant farmers around the world – the NFU is a founding member.”

MacInnis said farming led her to attend a National Farmers Union convention in November, 2018, where she met Dr. Annette Desmarais, an Associate Professor and Canada Research Chair in Human Rights, Social Justice and Food Sovereignty here at the University of Manitoba’s Department of Sociology, who was also one of the MHR program developers. Together with Desmarais, MacInnis gave a presentation on the UN Declaration on the Rights of Peasants. At this time, she said Desmarais encouraged her to apply for the program. “We both thought it would be a good fit for me to compliment the political work I have just begun with La Via Campesina,” she said. “My interest in supporting the Peasant Rights declaration implementation process and learning from Prof. Desmarais’ extensive study of food sovereignty – she is now my supervisor – inspired me to apply.”

One of her colleagues at the NFU, who was aware of her interest in international relations and food sovereignty, recommended she get involved in the work of LVC, particularly around the peasant rights movement. “Over the last 20 years, LVC has worked on a Declaration on the Rights of Peasants, and it was passed by the UN General Assembly in December 2018,” MacInnis explained. “It was precedent setting for a social movement to have brought a declaration of this nature from the grassroots level to the UN. There was ‘expert’ support from NGOs, academics, and state actors in the negotiation processes surrounding the declaration, but the text and movement behind it was entirely peasant lead. I was encouraged last minute to support a delegation of peasant leaders that were lobbying at the UN New York just prior to the adoption of the Declaration, and this was my introduction.” 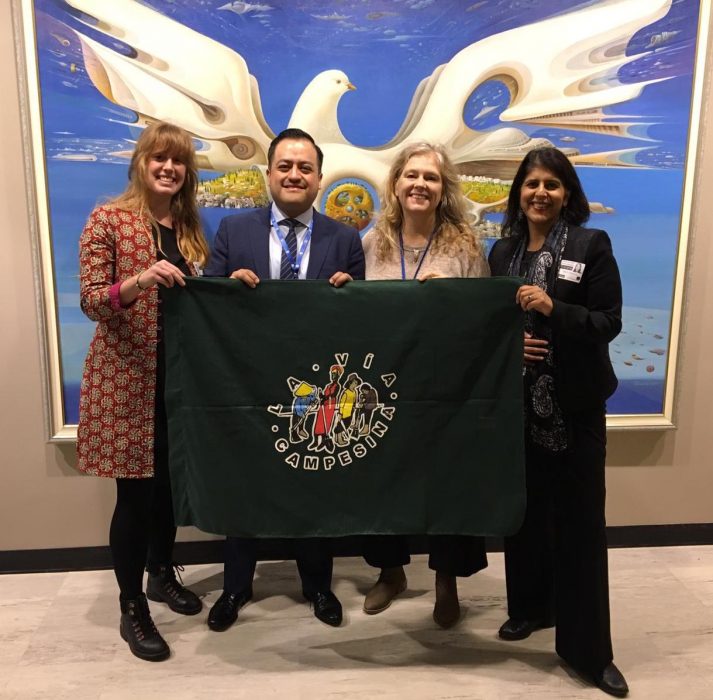 (L-R): Jessie MacInnis, Eduardo Fernando León Peñaranda (First Secretary, Permanent Mission of Bolivia to the United Nations), Allison Cohen (WhyHunger), and Smita Nerula (Elisabeth Haub School of Law, Pace University). Photo taken December 17, 2018, at the UN in New York, just after the UN Declaration on the Rights of Peasants was adopted by the 73rd Session of the UN General Assembly.

After her involvement in seeing through the ratification of The United Nations Declaration on the rights of peasants and other people working in rural areas (UNDROP) in November, 2018, MacInnis wrote an article about it, which appeared on the NFU website.

Just after starting the new MHR program in Winnipeg, MacInnis headed to Rome in October, 2019 to attend the Food and Agriculture Organization of the United Nations on behalf of the Peasant Rights Collective (LVC’s international collective that works on the peasant rights file). There, she took part in two events at the United Nations Committee on World Food Security (CFS) Plenary. She spoke on a panel for the Civil Society Mechanism entitled “The Future of Food and Visions of the Youth” alongside the Special Rapporteur on the right to food (Hilal Elver) and two state delegates. She also helped chair a special event before the entire plenary, leading structured dialogue with all CFS stakeholders about youth engagement and priorities for the committee.

Though already heavily involved with human rights advocacy, MacInnis was motivated through her work with LVC and the NFU to pursue the Master of Human Rights degree by her desire “to develop a more concrete knowledge of the human rights framework.”

“Human rights can be criticized as being a rather liberal, Western notion, and my work with LVC in a way pushes the boundaries of what can be achieved through a human rights framework,” she explained. “I want to complete this Master’s degree to better understand the institution of human rights and use this knowledge to support the peasant rights movement.”

MacInnis is especially pleased to be able to take elective courses at the University of Manitoba that are directly related to her field of interest. “Making connections between food sovereignty, the power and potential of social movements, and traditional human rights institutions will help me continue the advocacy work I am passionate about,” she said.

When she finishes, MacInnis intends to continue with her chosen path as a small-scale organic farmer. “Being an agroecological farmer is an important political act,” she said. “Both the NFU and LVC are made up of farmers – that is an important aspect of the movement, that we speak on our own behalf and advocate for policy and social change that impacts us the most. I hope to continue supporting the work of these organizations as they push for food system transformation. Having a strong background in human rights will allow me to provide advanced support to the peasant rights implementation strategies and processes.”

MacInnis has found so far that the MHR program is helping her to develop skills such as public speaking, which students are regularly required to do in making class presentations. “I’m also developing a well-rounded perspective of human rights, and I think this is incredibly important,” she explained.

“As an activist, it’s dangerous to only understand one-side of a story, or even one story in general. Being critical and unbiased, while also acknowledging your unique perspective, and being able to balance different approaches is something the program is helping me develop.”

Over the course of the program, every student must take 9 credit hours of required courses, plus 9 credit hours of electives. Students may choose to complete the degree with either a practicum that involves also writing a major research paper, or a thesis consisting of an independently-written research document. Required courses include Theory and Practice of Human Rights, which critically analyzes, from an interdisciplinary perspective, the theory and practice of human rights as a framework for social justice. In the course, students examine historical and current human rights struggles to better understand the potential politics, challenges and limitations of the international human rights framework.

Dr. Kjell Anderson, MHR program director, teaches the mandatory Human Rights Law course, which provides a critical and constructive study of a set of topics in Human Rights Law. A full list of program requirements are found at the Master of Human Rights page on the Faculty of Law website.

In the required Human Rights Research and Methods course, Dr. Anderson has covered such topics as decolonizing research, interdisciplinary approaches, and mitigating risks in precarious political contexts. Students are also being asked to prepare an “advocacy strategy,” in which they prepare a human rights advocacy project, including elements such as identifying key stakeholders and preparing a draft press release. The course draws heavily from guest speakers in exploring aspects of human rights work such as human rights investigations (taught by Karen Sharma, acting executive director of the Manitoba Human Rights Commission) and human rights education (taught by Graham Lowes, educator in residence at the Canadian Museum for Human Rights.

“In Winnipeg we are part of a growing human rights community, unlike anywhere else in Canada,” said Dr. Kjell Anderson. “The constellation of human rights institutions in Winnipeg gives our students unique opportunities, and we expect that this community will only grow stronger as we further develop collaborative programs.”

“We are off to an exciting start,” said Anderson. “Our current students are nearing the completion of their coursework and will soon leave the confines of Robson Hall to do human rights work and research in our community and beyond.”

“We will be joined in the next academic year by the Mauro Chair in Human Rights and Social Justice,” said Anderson of the program’s next stage in fulfilling the vision for the program set out by Winnipeg Philanthropist and University of Manitoba Faculty of Law alumnus, Dr. Arthur Mauro, OC, OM, QC. Looking to the future, Anderson said, “Our applicants for the next cohort of the program (2020-2022) are impressively international, coming from fifteen countries on four continents. Our ability to attract top tier applicants speaks to the program’s vitality and the unique contribution our program will make to the human rights landscape in Canada.”

If MacInnis’ experience so far in both what she brings to the program and what she is gaining from it is any prediction of what kind of start the MHR community is off to, it may be that Dr. Mauro’s vision might be off to a good start in being fulfilled: that Winnipeg may yet become a “New Geneva.”

Story submitted by the Faculty of Law.