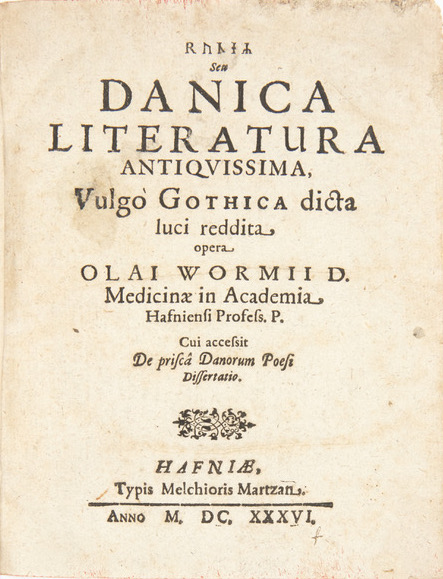 More commonly referred to as Literatura Runica, the book is one of the most significant early scholarly texts on medieval Scandinavia, which enriches the Icelandic collection’s runology and magic publications.

“In addition to this work being of value to Icelandic students, it could also allow Latin students a closer inspection of medieval Latin as it was written by Northern Europeans during the 17th century,” says Peter John Buchan, head of Icelandic studies, University of Manitoba.

The rare book was written in the 17th century by Ole Worms, an influential Northern European antiquarian, best known as the caretaker and namesake of an extremely important Old Icelandic manuscript — Codex Wormianus.

Worm’s position in runology influenced American horror fiction author H. P. Lovecraft to create a character of the same name, Olaus Wormius (Latinized form of Ole Worms), who translated the fictional Necronomicon (Book of the Dead) from Greek to Latin.

The book consists of three Old Norse texts in Icelandic (rendered in runes) and Latin:

“It is also an important work for the history of print, representing early print culture. The typefaces for printing runic letters were unavailable and had to be created to produce this work. It may very well be the first work to print runes with movable type,” adds Buchan.

The pandemic has changed the future of research by breaking geographical boundaries. Online Icelandic resources, including a dictionary, a newspaper, a magazine and audio books, have been added to the Libraries Archives & Special Collections, allowing students and researchers to keep connected with the materials virtually and achieve their academic goals.

This book is currently housed in the Archives & Special Collections Rare Book Room in the Elizabeth Dafoe Library. Contact Katrín Níelsdóttir, Special Collections Librarian to schedule an appointment to view the content, and visit the library catalogue for more information.

Creation Myths of the North: An Exhibit of Student Artwork

The Department of Icelandic Language and Literature has established a "free play" tradition which encourages students to pursue original projects and create new works inspired by Old Norse myths and legends. Creation Myths of the North: An Exhibit of Student Artwork shows some of the pieces created by students over the last few years.

Welcome back to the UM Libraries! The Libraries are at the heart of the university community and are essential to research, study, academic development, collaborations, and meeting peers. We’re excited to open our doors and welcome students to the Fall term. Whether it’s been a while since you’ve last visited our locations or it’s your first time on campus, we’d like to remind you of 10 reasons to visit our libraries!

UM Libraries together with the Senate Committee on Libraries (Sub-committee for Advancing Open Access) invite speaker submissions for the UM Open Access Week 2022 Symposium: Open for Climate Justice on October 27, 2022.