Laying down the law in three minutes flat

Any grad student who has tried to explain their thesis to someone at a party will likely risk glazed eyes and a polite “excuse me,” after about five minutes. The idea of getting months and sometimes years of focussed research across – in an interesting and engaging way – in only three minutes, is daunting. Kevin Sharma will bravely attempt this feat when he represents the Faculty of Law in the upcoming 3MT heats on February 27th. Watch for him half-way between 1:00 and 3:00 p.m. at the Engineering Building (E3-262) Senate Chambers, Fort Garry Campus. 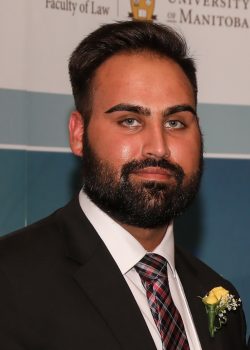 Born and raised in Winnipeg, Sharma completed a Bachelor of Science degree at the University of Winnipeg before graduating with a Juris Doctor (J.D.) from Robson Hall in 2019 and diving right in to the University of Manitoba’s Master of Laws program.

Although he intends to practice corporate law, and took elective courses related to that area throughout his J.D., he has become drawn to immigration law since beginning his Master’s, and has decided to add that area to his future practice.

Titled “Lost in translation? Why there is a stronger need for cultural sensitivity in East-Indian Immigration Application Decisions,” his thesis looks into negative decisions made by the Immigration Refugee Board (IRB) and Immigration Appeal Division (IAD) for applications for sponsorship. This topic comes from close to home for Sharma.

“My parents immigrated here from India in the 1980’s,” Sharma explained. “I never really paid attention to the immigration system until my undergrad at U of Winnipeg.”

During that time, he was president of the University of Winnipeg’s Indo-Canadian Student’s Association. “[T]hat allowed me to deal with a lot of international students from India and other parts of Asia. I got to understand their struggles with student visa applications, working part time hours due to their permit restrictions, and so on. It was just prior to deciding to do my master’s in law that I really wanted to look into immigration and how it affects our community.”

Sharma volunteered with the Hindu Society of Manitoba growing up, and with the India Association of Manitoba (IAM), where he currently sits on the board of directors. As such, he said he encounters immigration and sponsorship questions from community members. “It was those questions and the curiosity to those challenges that made me want to pursue this area for my thesis. That in addition to wanting to do it in an area of law that I hadn’t looked into during my J.D. degree and that I knew would be a hot topic.”

The specific issues Sharma deals with in his thesis have to do with India’s cultural practice of arranged marriages, which Sharma said, “could in turn be an immigration sponsorship nightmare.”

He explained, “Canadian citizens that go back home to marry and then later try to sponsor their spouses are sometimes faced with trying to prove the genuineness of that marriage (whether it’s a real marriage or simply a transaction so that one can gain immigration entry). There have been many cases within our own community here in Winnipeg that led me wanting to explore this as a thesis topic.”

Sharma has found that in some immigration decisions, officials rely on information that indicates the applicants’ positions in India’s traditional caste system to determine the genuineness of their relationship, even though, Sharma said, “today people fall in love or some arranged marriages that take place disregard the caste system….yet immigration officials still rely on those cultural norms and that may lead to a rejection of a sponsorship application.”

Sharma examines India’s cultural norms and practices and then delves into why some of those norms no longer, or should no longer hold footing in a decision-making process. He said, “I argue that stronger cultural sensitivity is required to ensure a just immigration system and although I narrow my research primarily onto the East-Indian community and their cultural norms and application decisions, it may very well extend to other cultures and countries that have their own cultural norms that also similarly may lead to immigration application issues.”

“The 3MT process also affords LL.M. students a chance to share their ideas with persons from other disciplines and intellectual backgrounds. In doing so, it forces each presenter to develop communication skills to disseminate their work in a way that others may be able to access and benefit from.”
– Dr. Amar Khoday

While the Faculty of Law has offered an LL.M. program for decades, until last year it was rare to find Graduate law students competing in the 3MT competition. Ihsan Daldaban was a pioneer competitor for law in 2019 with his thesis on standby letters of credit, boldly attempting to explain a very specific area of banking and trade-finance law in under three minutes.

Sharma thanks his thesis supervisor, Dr. Amar Khoday for encouraging him to apply for 3MT. Known for employing engaging teaching techniques in his classroom, Khoday expressed support for the competition. “3MT presents a unique opportunity for graduate law students to engage in knowledge mobilization drawing from their research,” he said. “The 3MT process also affords LL.M. students a chance to share their ideas with persons from other disciplines and intellectual backgrounds. In doing so, it forces each presenter to develop communication skills to disseminate their work in a way that others may be able to access and benefit from.”

Sharma himself finds the concept very interesting. “Having to explain your research in only three minutes to a non-specialist audience allows students to really focus on what they want people to take away without having to go into the whole detail about it,” he said. “Even something as complicated as the legal concepts behind the immigration decision making process seems a bit daunting to explain in so short a time, but I’m really looking forward to it!”