Launching the book A Diminished Roar: Winnipeg in the 1920s

Jim Blanchard, a retired academic librarian and Librarian Emeritus of the University of Manitoba, will be launching his latest book, A Diminished Roar: Winnipeg in the 1920s, published by University of Manitoba Press, on Sept. 16. He will be joined by Christopher Adams, Rector of St. Paul’s College, who will give remarks. 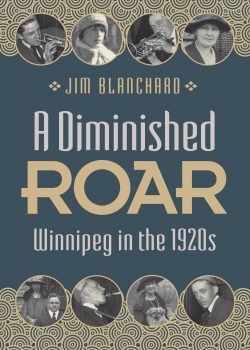 The third instalment in Jim Blanchard’s popular history of early Winnipeg, A Diminished Roar presents a city in the midst of enormous change. Once the fastest growing city in Canada, by 1920 Winnipeg was losing its dominant position in western Canada. As the decade began, Winnipeggers were reeling from the chaos of the Great War and the influenza pandemic. But it was the divisions exposed by the 1919 Winnipeg General Strike which left the deepest marks. As Winnipeg wrestled with its changing fortunes, its citizens looked for new ways to imagine the city’s future and identity.

Beginning with the opening of the magnificent new provincial legislature building in 1920, A Diminished Roar guides readers through this decade of political and social turmoil. At City Hall, two very different politicians dominated the scene. Winnipeg’s first Labour mayor, S.J. Farmer, pushed for more public services. His rival, Ralph Webb, would act as the city’s chief “booster” as mayor, encouraging U.S. tourists with the promise of“snowballs and highballs.” Meanwhile, promoters tried to rekindle the city’s spirits with plans for new public projects, such as a grand boulevard through the middle of the city, a new amusement park, and the start of professional horse racing. In the midst of the Jazz Age, Winnipeg’s teenagers grappled with “problems of the heart,” and social groups like the Gyro Club organized masked balls for the city’s elite.

“Through his attention to detail, Jim Blanchard brings to life Winnipeg’s historical figures and makes them human and relatable,” says Dale Barbour, author of Winnipeg Beach and former editor of the U of M’s Bulletin.  “This book captures the ambivalence of the 1920s and shows how the city attempted to knit itself back together after the dramatic events of the previous decade.”

One comment on “Launching the book A Diminished Roar: Winnipeg in the 1920s”