Hope remains: David Milgaard’s legacy in hands of next generation

On Wednesday, June 8, 2022 at 9:30 a.m., David Milgaard was to have taken the stage beside his long-time friend, David Asper, Q.C., at the University of Manitoba’s Convocation ceremony. Together, they were to receive honorary Doctor of Laws degrees that had been announced in January, 2020, but due to the pandemic, could not be officially awarded. The moment would have honored their respective remarkable lifetime achievements. Instead, Asper, former Acting Dean of the Faculty of Law (2020-2021), will stand alone on the stage facing Class of 2022 Juris Doctor students, accept his own – plus his friend’s award posthumously, and pass on Milgaard’s legacy of hope for the wrongfully convicted, to the next generation of lawyers.

Milgaard died at age 69 this past weekend in a Calgary hospital after a short illness, as reported by the CBC.Born in Winnipeg, he spent 23 years in Stony Mountain Institution for crimes he did not commit. Asper’s first major case as a criminal defence lawyer was representing Milgaard, and they remained friends long after. Since his exoneration, Milgaard had been working to effect change to ensure similar miscarriages of justice would not happen to anyone else. Recently, he had been part of a working group focussed on creating an independent commission to investigate and adjudicate applications by individuals claiming to be wrongfully convicted, that would be more efficient and take less time than existing procedures. 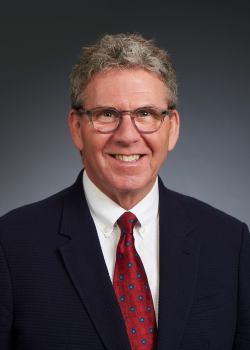 “The ‘system’ isn’t inanimate,” Asper said, when asked to describe the material impacts he has witnessed Milgaard’s efforts having on the Canadian justice system. “It’s made up of people, and I think David’s biggest impact was creating a much higher level of awareness about wrongful convictions. He broke through the stereotype of the so-called innocent prisoner and made people understand that some of them actually are, and that we need to do something about it.”

Since Milgaard was released, certain procedures, practices and attitudes have changed, Asper said. “The combination of the Donald Marshall case, Milgaard and Guy Paul Morin, brought huge attention to a variety of systemic issues that were amplified by many subsequent wrongful conviction cases,” he explained.

“All participants in the system became much more attuned to issues such as disclosure, forensic science/ ‘junk science’, jailhouse informants, false confessions, police and crown tunnel vision, and many other related issues.” – David Asper, Q.C., former Acting Dean of Law

Asper added that “Whenever any of these types of issues are in play at trial, judges have become very careful with both allowing the evidence and in their instructions to juries.”

He also noted that shortly after Milgaard was freed, the Federal Department of Justice changed its approach to Criminal Code of Canada s. 696 applications (for ministerial review on the grounds of miscarriage of justice) and created what has become known as the Criminal Convictions Review Group.

According to an article in Canadian Lawyer Magazine from April 1, 2021, while the Review Group hears applications, the majority involve homicide convictions as it is an arduous and costly procedure involving a lot of work. The independent commission that Milgaard and others envisioned would work more quickly and efficiently, and allow for a broader range of offences to be reviewed.

Innocence Canada, a Canadian non-profit organization dedicated to advocating for the wrongfully convicted, has been involved in assisting with S. 696 applications, and has been part of the movement helping with Milgaard’s efforts to create the independent commission. David Ireland, Associate Professor at the UM Faculty of Law and newly-appointed Director of Clinics, teaches Criminal Law and Procedure and other criminal law-related courses. He encourages law students to volunteer for their local Innocence organizations, having done work as a practicing lawyer himself, on wrongfully convicted matters.

“The Innocence community will miss his passion and leadership, but I have no doubt that the legal community involved in this work will redouble their efforts to prevent wrongful convictions and to exonerate those people who have been victims of miscarriages of justice.” – Associate Professor David Ireland, Faculty of Law

Because criminal law is a mandatory course for all law students, it should include reference to wrongful convictions, thereby educating all future lawyers about these critical issues, Asper said. When asked what more law schools might do to help prevent wrongful convictions from occurring, Asper said, “The easy answer is to have robust courses on wrongful convictions – not just on the basic recurring themes, but perhaps a secondary level that takes a deeper dive into more complex topics.”

Beyond classrooms, law professors engaged in research in this area can contribute by researching the underlying causes of wrongful convictions and further, what can be done practically to mitigate their impact, Asper said. “For example, how does one disrupt the psychology of tunnel vision in a police service? How do we overcome the tendency of juries to give greater weight to people in authority/experts even if their evidence has been challenged,” he said. “This might seem odd, but in Ontario, Dr. Charles Smith, a highly respected pathologist got away for a long time with junk science evidence that led to many wrongful convictions.”

Last summer, Milgaard had met with Federal Justice Minister David Lametti to discuss the creation of the independent Criminal Case Review Commission. Public consultations were held and a final report was tabled on February 3, 2022. While Minister Lametti had said he would act on creating the long-hoped-for independent commission, Asper said, “The big question David and all of us had is, “when and in what form?” That remains to be seen.”

The Faculty of Law proudly congratulates the Master of Human Rights graduating class of 2022. Celebrating the conclusion of their program at a gala event at the Canadian Museum for Human Rights on June 10th, the twelve members of the third cohort of graduates from this unique interdisciplinary program said farewell to Robson Hall and set off to pursue careers in Human Rights advocacy. We asked a number of these incredible students to share their experiences taking this degree.