A collection of the finished face shields

It’s an understatement to say that the COVID-19 pandemic has changed the communities we live in. If there’s one bright spot from all of this, it’s that people have rallied together to enact change and help others.

One example can be found here at the University of Manitoba, a unique joint partnership between the Faculty of Science and the Faculty of Architecture to make face shields for frontline workers.

Jacob Burgess, an assistant professor in the Department of Physics and Astronomy and part of the Ultrafast Microscopy and Magnetism Research Group teamed up with Jason Hare, the manager of FABlab. The two had never met before but were put in touch by a mutual colleague. It was an unlikely collaboration, but one that worked.

The pair was also helped by one of Burgess’s students, Sangeev Selvaratnam, who as it turns out, just finished his undergraduate degree and will be continuing with his Master of Science in the fall. 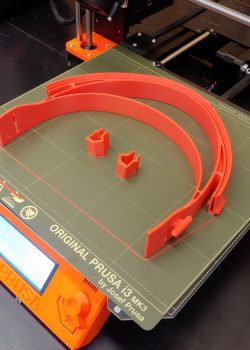 The headband of the 3D printed face shield

“The project started out as myself and Jason trying to figure out how we could do something useful for the COVID-19 efforts with the equipment we have in our respective fabrication spaces,” says Burgess, who is also a supervisor in the Faculty of Science Maker Space. “We recently expanded our range of 3D printers to allow classroom style instruction for hands on 3D design and creation of scientifically motivated parts/equipment. In FABlab, Jason had several laser cutters and a stock of clear plastic sheet.”

Considering their complementary equipment, they would be best suited to make face shields. And so it began.

“This pandemic has thrown us all for a loop, none more than in the field of health care,” says Hare. “The individuals that put themselves in harms way for the greater good is inspirational and humbling. The ability to assist in securing health care professionals with even minor Personal Protective Equipment, is the least we could do with the tools, knowledge and experience we have here at the University of Manitoba.”

The shields were made from 3D-printed headbands and laser cut visors. The combination of these materials meant the face shields would be easy to sterilize and reusable, unlike the more flimsy disposable shields.

“We produced a few prototypes based on open source designs with a few adaptations to fit the thickness of plastic Jason had in stock. We initially approached the Winnipeg Regional Health Authority with these prototypes with the idea that they could be sterilizable, reusable equipment that cuts cost in hospitals,” says Burgess.

Unfortunately, the scale of need from the WRHA did not match to the scale of possible production. Burgess and Hare could produce about 100 masks with the materials they had in stock and the inability to restock from their suppliers whereas WHRA needed thousands of masks.

The WRHA was able to provide valuable feedback on their design so the pair set out to improve what they first made and find someone else who could use them. In the end they incorporated a heat-treated curved visor and a more elaborate headband with multiple strap options to increase comfort.

The team then got in touch with Ruth Grimes, the vice president of the Canadian Association of Pediatricians. It turned out that pediatricians in Winnipeg were looking for some face shields to allow protection during check-ups with children. They hoped to get shields that were robust enough to be reusable, could be sterilized with WHO recommended cleaning solutions, and had rigid visors of high enough quality to allow use of octoscopes or other similar instruments without removing the shield.

“This more or less exactly described what we were able to make. In our final design, our face shields are quite a bit beefier than most open sourced designs and are designed to be sterilized and reused,” says Burgess. “Remarkably, Ruth also wanted about 100 visors. This meant our material limited production would be enough and our shields would go to a place where they would actually make a difference.”