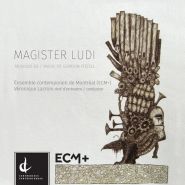 In 2000 he began what would become a dynamic and longstanding collaboration with conductor Véronique Lacroix and the Ensemble contemporain de Montréal (ECM+). Over the years, the group has commissioned and premiered three new works by Fitzell, all of which appear on the Centrediscs recording Magister Ludi. For the Winnipeg CD launch, the composer will introduce these and other works, and offer some insight into the writing and recording process.

In addition to concert music, Fitzell has presented multimedia installations in North America and Europe, most recently for World Music Days in Bruges, Belgium and Montreal’s Productions Totem Contemporain. An Associate Professor at the University of Manitoba Desautels Faculty of Music in Winnipeg, Fitzell teaches composition and leads the eXperimental Improv Ensemble (XIE). He also serves as Artistic Co-Director of the Winnipeg new music organization GroundSwell.