John Sorensen is a man who believes in happy accidents. While that might seem a bit strange for an assistant professor in the Department of Chemistry who spends his days conducting experiments and analyzing data, it’s particularly apt when describing the genesis of Sorensen’s current collaboration with Bruce Hardy of Myera Group, a Winnipeg-based biotech company.

“I’d been invited to submit a proposal to something called BioFuelNet Canada [BFN] about 6 or 8 years ago. That was a network of centres of excellence that was interested in biofuels. One of my collaborators here at the UofM, David Levin, thought there was a project we could participate in there, and he had a particular polymer that he felt we could generate biofuels out of. We did some work on it and it went a few places, but the funding ran out on that.

“So, at the very first meeting of BFN I met [Hardy], and we wound up running into each other at the departure lounge at the airport in Montreal. Our flight back to Winnipeg was delayed for over an hour, so we sat [there] probably two and a half hours, just talking about some of the ideas that he had. As a result of that initial interaction, I’ve had a 6-year relationship working with Bruce, getting things established and set up.” 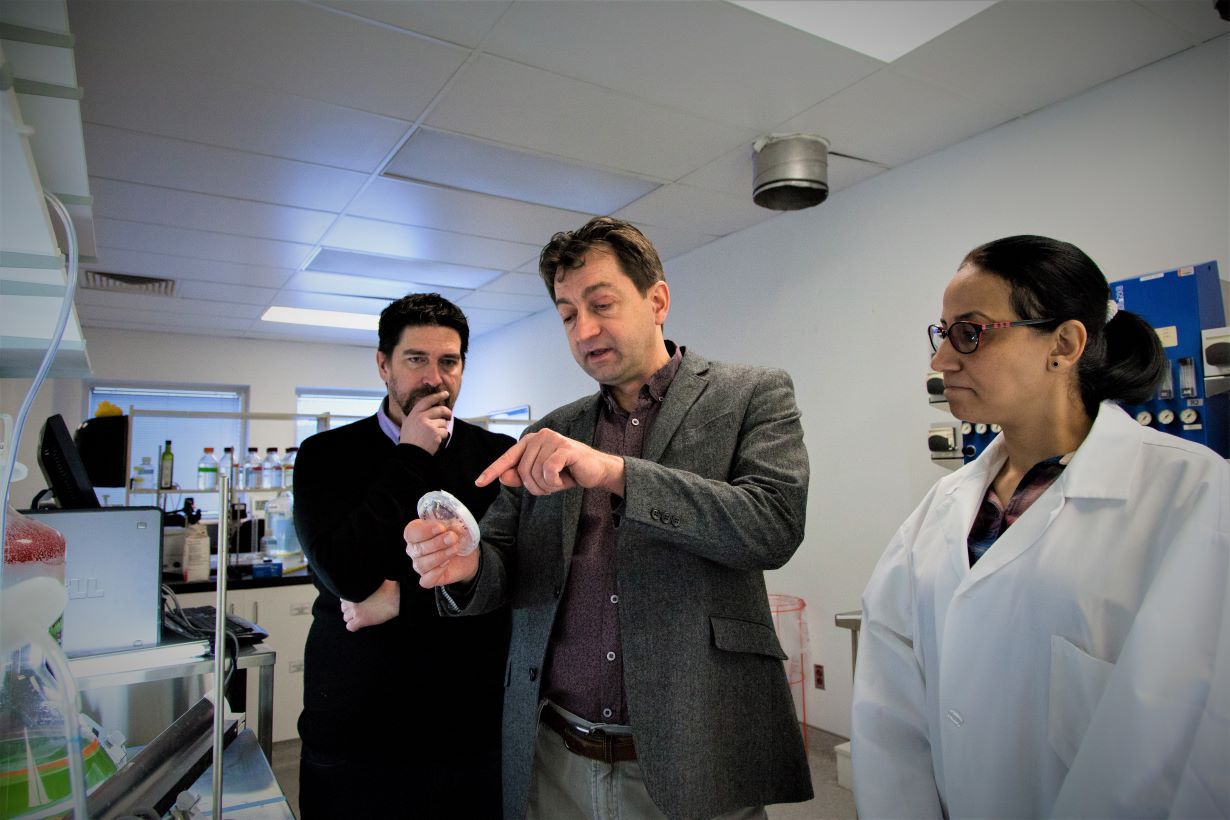 What the two men have “set up” is a potentially highly profitable collaboration of Hardy’s Myera Group and ReseSorensen’s arch Group. Their shared goal is to create a high-yielding protocol for producing carotenoids, which are related to beta-carotene and give carrots and tomatoes their distinctive colour. The carotenoids would then be incorporated into value-added products such as pills or food additives. To do this, Sorensen’s lab is working with strains of microorganisms (algae) that produce natural carotenoid-type products.

“One of the applications we’ve been looking at with this is to see if we could add this to chicken feed and produce ‘eye-health eggs’, for example. The Sorensen Group has been working to help the Myera Group analyze the outcomes of their culture conditions for the production of these carotenoids by identifying the individual chemical structures of the carotenoids produced, quantifying those amounts and working with [Myera’s] production team to feedback that information to say ‘this was a good culture condition, this wasn’t so good’. That’s the main part of the Sorensen Group working with the Myera Group.”

Hardy’s contribution has its’ roots in his knowledge of the challenging living conditions experienced by those in Northern Manitoba. His belief is that life in Northern communities can be improved by enhancing food security, as well as providing access to economic opportunities.

“What do First Nations and Metis enjoy and do and already have competency at? Well, fishing. So, fish are actually at the core of the platform technology. From that, we now have a ____ stream that we can leverage.

“John is one of the very few who can walk across to the production side and say ‘what yeast, bacteria, algae or fungi can produce what bioactive, and is it economically feasible to do it in a system like this that could work up north?’”

The exchange of Sorensen’s scientific expertise and experimental facilities for Hardy’s business acumen and financial support makes for the kind of good news story that’s irresistible to funding agencies such as MITACS and NSERC, both of whom have already provided financial assistance to Sorensen’s research and to the collaboration in general. Sorensen says it’s this type of innovation that allows smaller businesses access to next-level research, which in turn helps them to grow and prosper, creating job opportunities as well as pumping money into the local economy. 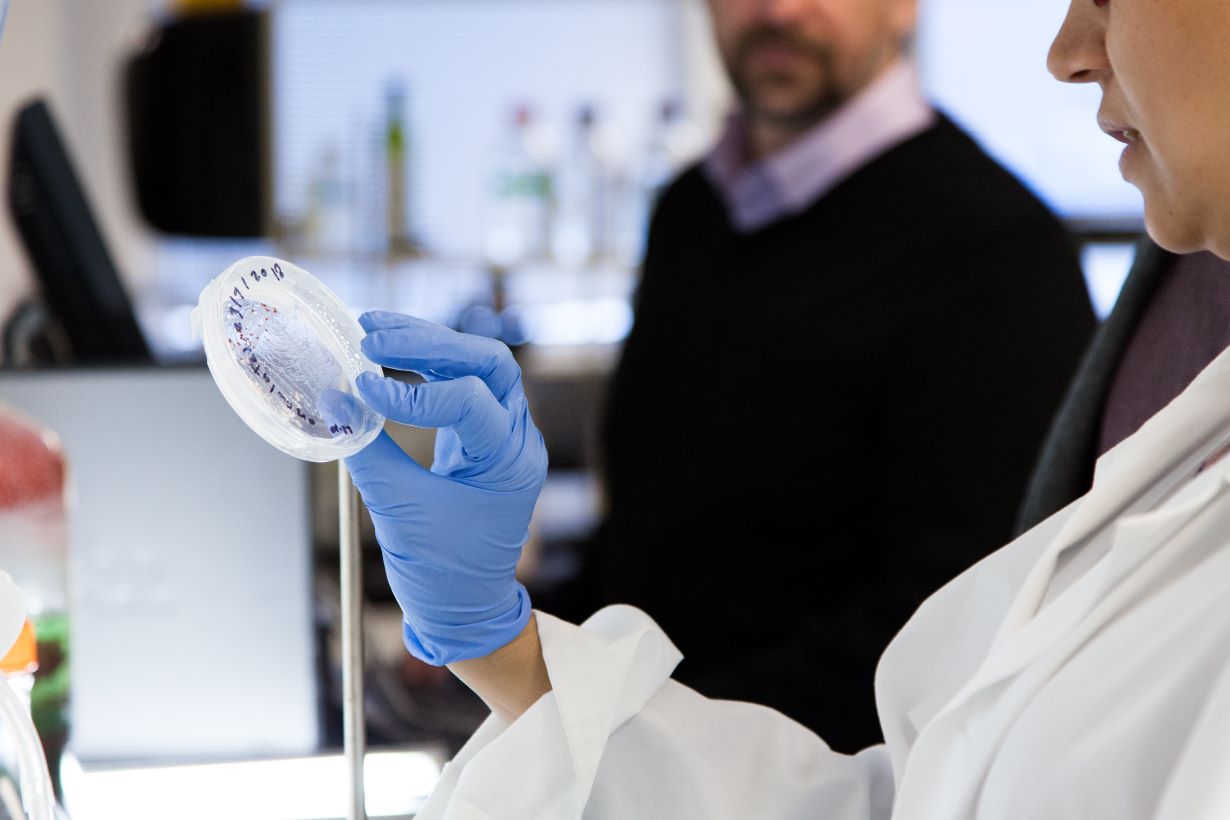 In fact, Hardy’s plans extend far beyond Winnipeg’s borders. Self-identified as Metis, Hardy founded Myera as a way of creating opportunities for food security and economic development in remote Indigenous communities. It’s that kind of vision, coupled with Hardy’s drive to succeed that Sorensen admires.

“He’s a real interesting guy – an established entrepreneur in Manitoba. He’s set up and is running Function Four, which is a successful software company. He’s got a lot of products out on the market and a lot of connections there. So that, for me, is a big part of it, in the sense that he knows what he’s doing in setting up a company, he’s got that proven track record. So, when he talks about how to make business decisions, business models, he’s talking from a position of experience. Just like when I suggest some scientific solutions to the problems we’re running into, he typically defers to that, because that’s why he’s brought me on board.”

Over the long-term, Hardy wants to establish a facilities, whether in warehouses, shipping containers or some other set-up that can be placed in northern indigenous communities in need of economic growth. Not only would the residents be able to eat what’s produced; there would be a number of jobs created as a part of operating and maintaining the facility.

That isn’t just wishful thinking. Myera currently operates a fish farm just outside of Winnipeg. It’s already been featured by local media. CBC News: How this greenhouse and fish farm operation is fuelled by bitcoin mining.

“There’s been a lot of stuff that Myera Group has done in getting the fish farming part of it to work. They’ve got tanks of fish out at their test facility in St. Francis-Xavier, where they’ve got fish swimming around in a tank, just monitoring conditions to make them grow in a reasonable way and then using the algae to remediate the water.

“One of the applications for the algae that we’re growing, for example, is to use the algae cells themselves as fish feed. Those fish could be grown in a mini-fish farm; composite containers of 9 to 10,000-gallon tanks that the fish could grow in; be fed on the algae; the algae could be used to clean the fish waste out of the water; the water could all be recycled. Some of the high nutrient waste water from the fish could be used as fertilizer for things like lettuce farms. There’re all sorts of these interconnected ideas that Myera Group is working on.” 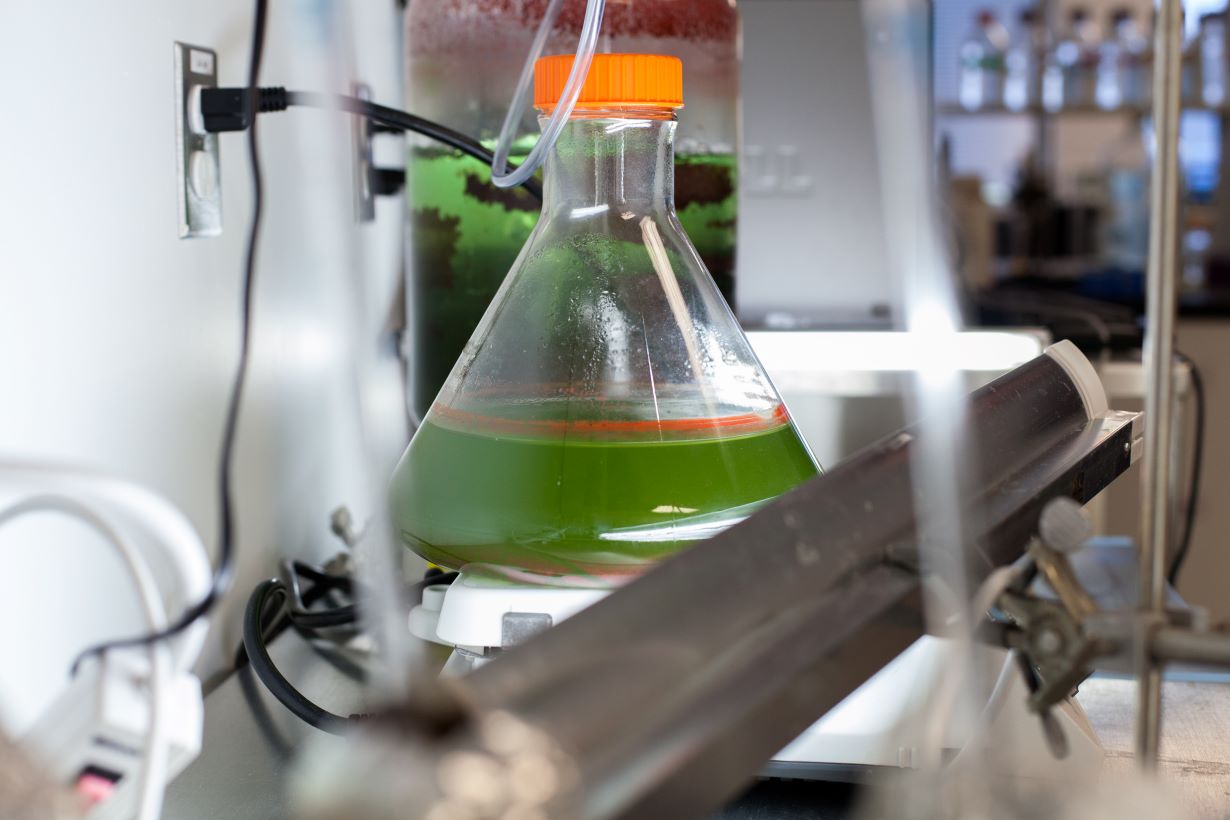 Currently, Sorensen and Hardy are concentrating their energies on the production of carotenoids.

“The carotenoids would be the number one for right now that we’re really focusing on, just because we think that’s got the highest potential pay-off. The return on the price of those is pretty healthy and would allow us to start generating enough revenue to keep the other parts of the company running and be able to start spinning off some of the economic development parts of it.”

As for Sorensen, he’s excited at what this collaboration could mean for his students.

“If Myera succeeds, there’s a place for the students that come out of my research group to get employment in the province. Not just my group, but all of the graduates from the Faculty of Science and other faculties from the University of Manitoba. I think it’s a really nice example of how serendipity does play a role in all the things you do in science, not just scientific discoveries.”