The video features Biden reading the verse over a montage of images both of Biden on the campaign trail and scenes from across the U.S. related to the past divisive and charged year characterized by protests and the pandemic.

Biden had long adopted this famous Heaney quote as a signature piece. He cited it when he first ran in the 2008 presidential primaries, and on occasions when he spoke as vice-president.

“History says, don’t hope
On this side of the grave.
But then, once in a lifetime
The longed-for tidal wave
Of justice can rise up,
And hope and history rhyme.”
– Seamus Heaney pic.twitter.com/7nB1ytYlvm

The verse is from The Cure at Troy, Heaney’s 1990 version of Philoctetes, the play by Sophocles about the Greek hero Philoctetes who, during the Trojan war, suffers from a festering foot caused by a snakebite. The chorus in the play, aiming towards social healing, recites the lines that have become part of Biden’s political repertoire.

In drawing on this verse, Biden implicitly pitched himself as the man poised to mediate healing and defend “the soul of America” after caustic wounding. Meanwhile, President Donald Trump clung to the lyrics of “The Snake,” a song popularized by soul singer Al Wilson and written by Oscar Brown Jr., singer-songwriter and civil rights activist. Trump recited the lyrics at numerous rallies as well as this year’s Conservative Political Action Conference, prompting criticism from Brown’s daughter, Africa Brown, who told CBC radio that “what Donald Trump stands for, and what my father stands for, are in such opposition.”

The song tells the cautionary story of a woman who nurses a near-frozen snake back to health in her home, only to have the reptile fatally bite her in recovery. Trump appropriated the song as a not-so-subtle dog whistle to convey an anti-immigration, xenophobic message to his Republican base.

Heaney conceived of The Cure at Troy as a drama about reconciliation, about following one’s conscience but also about setting personal feelings aside for the sake of the common good.

In the play, Philoctetes, on his way to fight the Trojan War, has been stranded on a desert island for 10 years, abandoned by Odysseus, whose crew could not bear the noxious smell of his wound.

Now, Odysseus returns with Achilles’ son, Neoptolemus, because it has been prophesized that the Greeks will only prevail over Troy through the use of Hercules’ bow and arrow, now in Philoctetes’ possession.

After Heaney published The Cure at Troy, its resonance with the Troubles in Northern Ireland was immediately recognized, particularly in its lyrical denouement: after Neoptolemus realizes that Odysseus’ advice to trick Philoctetes out of the bow goes against his conscience, he returns to apologize and reconcile with the wounded warrior.

Hope on this side of the grave

Neoptolemus urges Philoctetes similarly to relinquish his past grievances and return to the Greek army, be healed and help conquer Troy:

Philoctetes finally agrees. The play’s chorus recites the lines that Biden has returned to:

On this side of the grave.

But then, once in a lifetime

Of justice can rise up

And hope and history rhyme.” 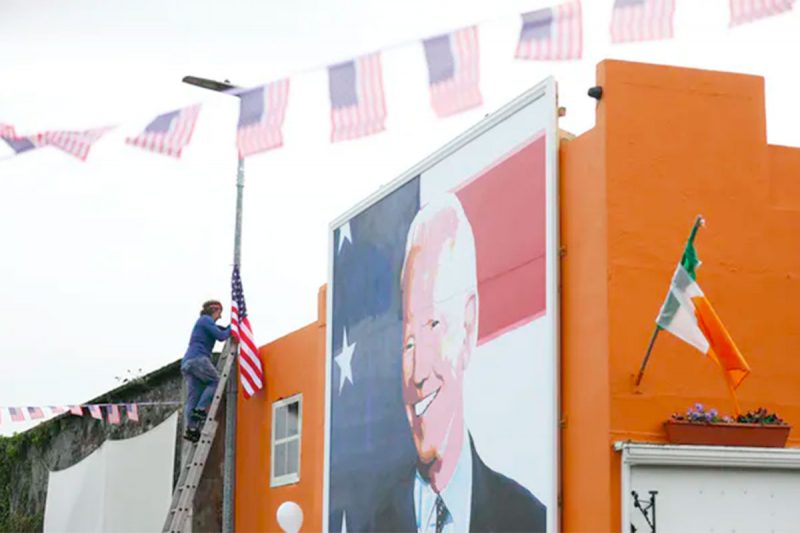 A man puts a U.S. flag up near the mural of president-elect Joe Biden, in the town of Ballina, Ireland, where Biden has ancestral roots and some extended family, Nov. 7, 2020. // AP Photo/Peter Morrison

The call to renounce vengeful thoughts embodied a national desire for peace and reconciliation in Northern Ireland, so that when Mary Robinson was elected president of Ireland in 1990, she recited Heaney’s prophetic lines in her inauguration speech.

Similarly, when President Bill Clinton visited Northern Ireland in 1995 to commemorate the earlier ceasefire announcement that preceded the eventual Good Friday Agreement of 1998 — what the BBC called “the beginning of the end” of the conflict — he also quoted Heaney.

Biden also recited the lines of the chorus at his speech accepting the nomination at the Democratic National Convention in August.

Significantly, it’s not central characters in this ancient drama who sound this call, but the chorus. The chorus surveys the noble characters and finds them wanting: “Shining with self-regard like polished stones,” or “Licking their wounds / And flashing them around like decorations.”

Biden has cannily pitched himself through this campaign as the political chorus: hating the divisiveness, the pettiness, the selfishness sharing the stage with him.

He calls for healing rather than vengeance, unity rather than division, and portrays himself as the figure that can bring together the “you and the me,” the “it of it” all. He offers himself, through this poetic invocation, as a part of the healing ritual of a country hobbled by a snakebite, tricked, forsaken and left abandoned for years, wounded and bereft.

Biden appears to want to pick up Heaney’s call for reconciliation and healing while pitching himself as one among the people.

After U.S. media announced that Biden had won Pennsylvania and had enough electoral college votes to become president-elect, the Irish network RTÉ tweeted Biden’s voice reading the lines over a montage of news footage in tribute.

The lines Biden has highlighted propose a hopeful view that renewed relationships are possible in human life. Biden’s chorus invokes the “miracle self-healing / The utter, self-revealing / Double-take of feeling.”

The “double-take of feeling” suggests an ability to change one’s mind, to change directions, to forgive and reconcile as aspects of the fundamental changeability of human nature. For Biden, such possibilities animate hopes for “miracle” of “self-healing” needed in the country he is about to lead. These lines are short and direct iambic trimeter, a rhyme scheme often utilized by that other great poet of Irish politics, W.B. Yeats. The triple end-rhyme links them together in the reader’s mind.

It is perhaps this layered capacity for empathy and for self-examination, for personal and political change, that would make “hope and history rhyme.”

This article is written by Mark Libin, Associate Professor, Department of English, Theatre, Film & Media, University of Manitoba, first appeared on The Conversation.