University of Manitoba researchers have discovered that a specific protein has the potential to be used as a treatment for multiple sclerosis (MS) and could one day predict whether someone may develop the disease.

A new study has found that a protein called Neuregulin-1 beta 1 declines early in pre-symptomatic MS animal models and continues to decrease as MS progresses.

“We have shown that a decline in the plasma levels of Neuregulin-1 beta 1 is positively associated with MS development and progression, and could be potentially used as an early disease marker to help in MS diagnosis,” said Dr. Soheila Karimi, professor in the department of physiology and pathophysiology and senior scientist at the Regenerative Medicine Program in the Max Rady College of Medicine, Rady Faculty of Health Sciences. “This is an important observation because there is currently an unmet need for early disease markers for MS. This could lead us in the future to predicting whether someone may develop the disease.” 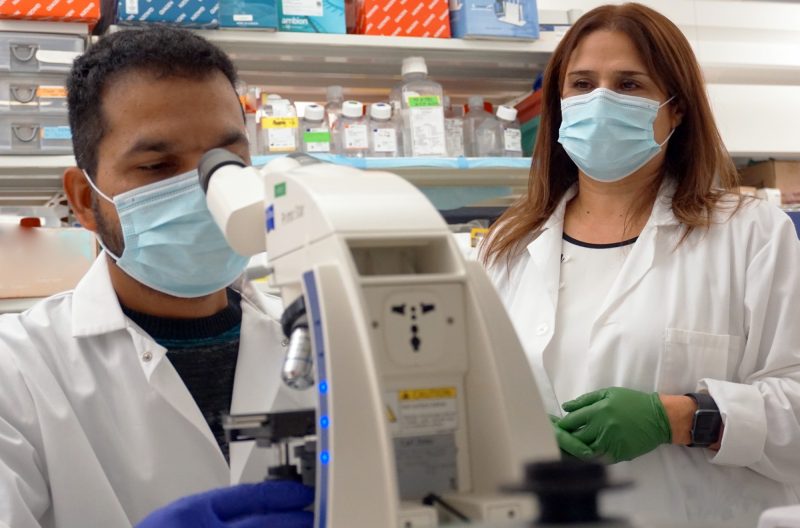 The work, led by the first author Dr. Hardeep Kataria, a research associate on Dr. Karimi’s team, is titled Neuregulin-1 beta 1 is implicated in pathogenesis of multiple sclerosis, and is published in the journal Brain.

The scientists observed that the decline of Neuregulin-1 beta 1 results in an imbalance in the immune response and helps develop MS. In an MS relevant animal model, they found that when Neuregulin-1 beta 1 is restored therapeutically while MS is developing, it can delay the onset of the disease and ameliorate disease progression and severity.

Karimi, the senior author of the study, said the therapy doesn’t suppress the immune system; rather it balances it out. She said that this is exciting because their findings show the promise of Neuregulin-1 beta 1 as a new targeted immunotherapy for MS pathology.

The researchers validated the animal studies using human patient samples and found that the plasma levels of Neuregulin-1 beta 1 were also significantly reduced in individuals with early MS and was positively associated with progression to relapsing-remitting form of MS.

“This study is important because MS is a devastating disease and it most often happens in young adults who are between 20 and 49 years old,” said Karimi, also a scientist at the Children’s Hospital Research Institute of Manitoba. “Individuals with MS live with the debilitating consequences of the disease for decades, and if we can help find a treatment it could improve the quality of life for a large population of people.”

“We are hoping that we can use this study as a foundation to build on and hopefully at some point translate these discoveries into clinical therapies,” Karimi said.

Karimi’s team has received new funding from the MS Society of Canada to further investigate the potential of Neuregulin-1 beta 1 treatment in the repairing of damaged nerve fibers in the brain and spinal cord during the progressive phase of MS. They also hope to look at the levels of Neuregulin-1 beta 1 in a larger number of MS patient samples in future studies.

“We are excited about our findings as they hold promise for early diagnosis, targeted disease prevention and personalized therapeutic approaches for MS,” Karimi said.