Evolution of flowering plants more complicated than we thought

Although it may not be obvious from the lingering snow and ice on the ground these days, Spring is just around the corner, and plants will be coming back to life in the slowly warming soil.

But some researchers have just brought fossil seeds ‘back to life.’ They won’t actually grow, but seeds of a newly discovered fossil plant are so exquisitely fossilized that researchers have been able to study them at a cellular level of detail, despite the fact that they are 136 million years old. 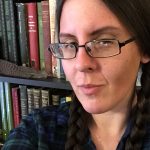 UM biologist Az Klymiuk along with colleagues Gar Rothwell and Ruth Stockey of Oregon State University have discovered a new genus of ancient plants that is unlike any other plant on Earth, living or extinct. The new fossil may represent an entirely new order of plants, and is a gymnospermous or non-flowering plant from the renowned Apple Bay fossil site on northern Vancouver Island. The new plant has been named Xadzigacalix quatsinoensis, as a nod to Kwak̓wala-speaking First Nations (xa̱dziga = plant resin, calix = Latin for chalice, since the seeds are held within a fruit-like ‘cup’). The Apple Bay site is within traditional and unceded territory of the Quatsino First Nation, and over the past two decades has emerged as one of the most important fossil plant localities in the world.

“Apple Bay is incredible – the fossil plants there are preserved in three dimensions, and a cellular level of detail. But more importantly, this flora gives us our best window into what the world looked like before the rise of flowering plants,” says Klymiuk.

By 130 million years ago, flowering plants were becoming abundant in the fossil record, and through the late Cretaceous they came to dominate terrestrial landscapes. Most plant biologists believe flowering plants out-competed other seed plants, perhaps by being more adaptive to changing climate, or that the non-flowering plants were already in decline by the early Cretaceous. The vast majority of seed plants that have ever lived are now extinct, but the gymnospermous plants that are still around, such as evergreen trees, are themselves relicts of a much greater fossil diversity, and many major lineages of seed plants are known only from the fossil record. The 136 million-year-old fossilized plants of Apple Bay show that seed plants were even more diverse throughout the Cretaceous than botanists had previously realized.

Klymiuk explains: “There is no other family or order of plants in the fossil record (or growing today) that closely resembles the new plants we have discovered. It’s rare to identify new orders or families of plants, but the Apple Bay site has now yielded two new orders; back in 2009 we identified a plant called Doylea, which produces paired seeds with fleshy coverings that are borne in cones. Now we have yet another new group of plants which enclosed their seeds in fleshy coverings.”

Xadzigacalix produced seeds with complex three-layered seed coats that were protected within a resinous, fleshy ‘cupule’ at the tip of a woody stem. Its pollen grains directly entered an opening in the seed coat (the ‘micropyle’) where they germinated and directly fertilized the embryo. This differs from flowering plants, where pollen grains land on the stigma (part of the ‘female’ part of a flower) and then grow down into a flower’s pistil so they can fertilize the ‘egg’.

The Xadzigacalix plant’s cellular anatomy, growth and development, as well as the morphology of the seeds and enclosing cupule constitute a novel combination of features not found in any other lineage of plants.

Klymiuk notes: “Xadzigacalix underscores that we are continuing to discover crucial fossil data necessary for understanding not only the diversity of seed plants during the Cretaceous, but also the evolutionary context of flowering plants. It’s probably premature to think we can understand the ‘family tree’ of flowering plants when we’re still discovering new groups of plants in the fossil record.”

The discovery is in publication in the American Journal of Botany.