University of Manitoba Press is launching two books in the final week of January, one exploring the traditional Anishinaabek lifeways in the context of art and Residential School, and the other examines Indigenous resurgence within cities. As part of this launch, UM Press and the UM Institute for the Humanities will also hold special events (details below).

Injichaag: My Soul in Story: Anishinaabe Poetics in Art and Words

When: Monday, Jan. 27 at 7 p.m. at McNally Robinson Booksellers (4000-1120 Grant Ave.). And a special event co-hosted by the UM’s Institute for the Humanities will be held on Tuesday, Jan. 28 from 2:30 p.m. – 3:30 p.m.in the St. John’s College Common Room and will feature professor Warren Cariou, director of the Centre for Creative Writing and Oral Culture. 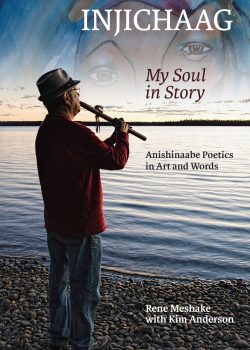 Injichaag shares the life story of Anishinaabe artist Rene Meshake in stories, poetry, and Anishinaabemowin “word bundles” that serve as a dictionary of Ojibwe poetics. Meshake was born in the railway town of Nakina in northwestern Ontario in 1948, and spent his early years living off-reserve with his grandmother in a matriarchal land-based community he calls Pagwashing. He was raised through his grandmother’s “bush university,” periodically attending Indian day school, but at the age of ten Rene was scooped into the Indian residential school system, where he suffered sexual abuse as well as the loss of language and connection to family and community.

This residential school experience was life-changing, as it suffocated his artistic expression and resulted in decades of struggle and healing. Now in his twenty-eighth year of sobriety, Rene is a successful multidisciplinary artist, musician and writer. Meshake’s artistic vision and poetic lens provide a unique telling of a story of colonization and recovery.

The material is organized thematically around a series of Meshake’s paintings. It is framed by Kim Anderson, Rene’s Odaanisan (adopted daughter), a scholar of oral history who has worked with Meshake for two decades. Full of teachings that give a glimpse of traditional Anishinaabek lifeways and worldviews, Injichaag: My Soul in Story is “more than a memoir.”

Kim Anderson is a Cree/Métis writer, a Canada Research Chair in Indigenous Relationships, and an Associate Professor in the Department of Family Relations and Applied Nutrition at the University of Guelph. She has published six books, including Life Stages and Native Women: Memory, Teachings and Story Medicine, and Indigenous Men and Masculinities: Legacies, Identities, Regeneration. 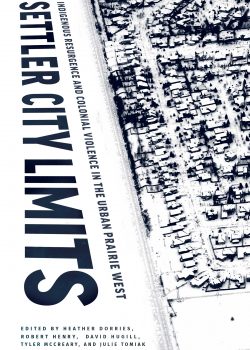 While cities like Winnipeg, Minneapolis, Saskatoon, Rapid City, Edmonton, Missoula, Regina, and Tulsa are places where Indigenous marginalization has been most acute, they have also long been sites of Indigenous placemaking and resistance to settler colonialism.

Although such cities have been denigrated as “ordinary” or banal in the broader urban literature, they are exceptional sites to study Indigenous resurgence. The urban centres of the continental plains have featured Indigenous housing and food co-operatives, social service agencies, and schools. The American Indian Movement initially developed in Minneapolis in 1968, and Idle No More emerged in Saskatoon in 2013.

The editors and authors of Settler City Limits, both Indigenous and settler, address urban struggles involving Anishinaabek, Cree, Creek, Dakota, Flathead, Lakota, and Métis peoples. Collectively, these studies showcase how Indigenous people in the city resist ongoing processes of colonial dispossession and create spaces for themselves and their families.

Working at intersections of Indigenous studies, settler colonial studies, urban studies, geography, and sociology, this book examines how the historical and political conditions of settler colonialism have shaped urbandevelopment in the Canadian Prairies and American Plains. Settler City Limits frames cities as Indigenous spaces and places, both in terms of the historical geographies of the regions in which they are embedded, and with respect to ongoing struggles for land, life, and self-determination.

Heather Dorries is an Assistant Professor in the Department of Geography and Planning and the Centre for Indigenous Studies at the University of Toronto.

Robert Henry is an Assistant Professor in the Department of Sociology at the University of Calgary.

David Hugill is an Assistant Professor in the Department of Geography and Environmental Studies at Carleton University.

Tyler McCreary is an Assistant Professor in the Department of Geography at Florida State University.

institute for the humanities, UM Press