As it did in 2016, University of Manitoba Press is releasing a free ebook with analysis of the recent provincial election. The ebook will be released on Thursday, Sept. 26  with a panel discussion at McNally Robinson Booksellers at 7 p.m. on Monday, Sept. 30. 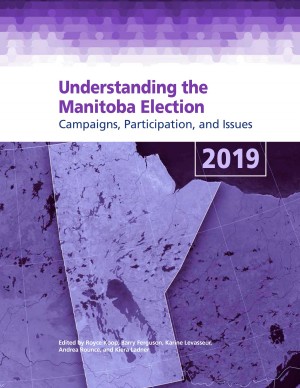 Edited by UM political scientists Royce Koop, Barry Ferguson, Karine Levasseur, Andrea Rounce and Kiera Ladner, and published in association with the University of Manitoba’s Duff Roblin Chair in Government, Understanding the Manitoba Election 2019: Campaigns, Participation, and Issues offers an early analysis of the campaign and insights into the decision that Manitoba voters made on September 10.

This open-access publication features contributions from a team of experts who have followed the campaign and contribute not just to a post-election review, but also to the major discussions that will permeate provincial life over the next four years.

While some refer to the 2019 Manitoba election as a legitimate “snap” election, others see it as a violation of the spirit of Section 49 of the province’s Elections Act. The Act provides for predictable fixed-date elections whereby general elections are held every four years, on the first Tuesday of October. Fixed-date elections ensure predictability of elections for citizens, political parties, and advocacy groups. They diminish the power that a sitting government has to call an election at a time that increases its probability of winning (known as a “snap” election). Three years into its mandate, the Pallister government began discussing an early election call instead of waiting until October 2020, as the fixed-date provisions specified. Since Manitoba’s 150th anniversary as a province occurs in 2020, Premier Pallister argued that citizens did not want their province’s birthday year to be negatively impacted by an election, and specifically by the mandatory government communications blackout period ninety days prior to an election. While nearly half of Manitobans wanted the premier to stick to the mandated election date, Pallister’s early election call was seen by most others as unimportant or not concerning, or within the premier’s mandate.

The election call came after significant changes to Manitoba’s electoral boundaries, which were announced in December 2018 and recommended by a non-partisan commission. The changes saw an increase in the number of seats in the City of Winnipeg and a decrease in the number of rural seats to reflect shifts in the population. The boundary changes were significant, with only one riding out of fifty-seven keeping the same boundaries it had in the 2016 election. With new boundaries come new battles, making for some unforeseen challenges and unpredictable outcomes. Combined with these changes is the fact that several long-serving politicians chose not to run again, such as Steven Fletcher (Progressive Conservative/Independent), James Allum (New Democratic Party), and Judy Klassen (Liberal). The absence of these incumbents produced even more unpredictability. Changes to electoral financing provisions also impacted the funds available for both political parties and advocacy groups to spend during the campaign.

Although the 2019 election campaign contained many similarities to the 2016 campaign, the 2016 provincial election was, in our view, “clearly a referendum on the leadership provided by Greg Selinger and his NDP government.” While the 2019 election could also be seen as a referendum on Pallister’s leadership and accomplishments over the past three years of governing, we also saw a reversion to historically entrenched voting patterns in Manitoba. Traditionally, Manitobans give governments at least two terms, with the exception of the Sterling Lyon (PC) government which only enjoyed one term beginning in 1977. Given the public support for Pallister’s government going in to the election, we expected Manitobans to give it another term, albeit with a slightly reduced majority.

Pallister and his team had a significant record to defend during this election. This record included a major overhaul of health care, including the closure of several emergency rooms; cost containment to reduce the deficit that involved taking on the unions and reducing the size of the public sector; a promise to reduce education taxes (followed by a commitment to removing the education tax portion of the property tax); drafting a response to the opioid crisis; and reducing the Provincial Sales Tax—all within the context of a promise to become the most improved province in Canada. While defending this record, public opinion polling saw the NDP resurging, notably in the City of Winnipeg, with the Liberals and Greens holding steady. The PCs launched significant attacks on NDP Leader Wab Kinew’s past and his leadership abilities, which the NDP countered with questions about Pallister’s lengthy vacations at his home in Costa Rica and the impact of health care cuts for average citizens. Despite these dynamics, the campaign was unusually dull in large part because it occurred in the summer, when Manitobans travel or head to cottage country to enjoy the warm weather.

This election did see a significant role for advocacy groups and their campaigns. The accessibility community’s Disability Matters Vote campaign leveraged social media and grassroots mobilizing to highlight the challenges facing Manitobans with disabilities. Other groups focused on health care changes and poverty. Writers in this volume explore these campaigns and their impacts further.

The uninspired nature of this campaign may have contributed to another majority PC government. The PCs won thirty-six seats, a decline of four seats from 2016. This outcome came at the cost of losing Colleen Mayer (St. Vital) who held a cabinet minister position prior to the election. The NDP fared better than expected with eighteen seats (up six seats from dissolution), while the Liberal Party lost official party status by only securing three seats. There was considerable excitement for the Green Party in the riding of Wolseley given that it nearly captured this seat in 2016. With Rob Altemeyer (NDP) no longer running, there were high hopes for the Green Party, but it simply could not withstand the powerful NDP election machine, which resulted in Lisa Naylor winning the seat for the party.

Voter turnout was low at 54.99 percent, which compares to 57.57 percent in the last provincial election. This is likely because much of the campaigning occurred over the summer and advanced voting took place during the traditional back-to-school and harvest seasons.

There were some important wins for diversity and representation in this election. The main parties all had an increased number of diverse candidates. The three main parties ran a number of Indigenous candidates, with the Liberals and PCs running seven and the NDP running ten Indigenous candidates. The PCs ran their first openly gay candidate in this election and, according to a CBC report, “at least seven candidates for each of the Liberals and NDP also identified as LGBTQ.” Additionally, Joan Grace indicates in her chapter on women and the election that more women stood for election across the province in 2019 than in the previous two elections. And while diversity in the campaign matters, whether these candidates are in “winnable seats,” where they have a real chance of winning, is critical. In this case, three black MLAs—Uzoma Asagwara and Jamie Moses for the NDP and Audrey Gordon for the PCs—were elected for the first time in Manitoba’s legislative history.

This publication includes thirteen chapters that focus on the activities and performance of the three main political parties; analysis of participants outside political parties in the 2019 election, including pollsters, unions, and the disability community; representation and diversity; the campaign itself, including turnout, campaigning, and voting; and key public policy issues, including health, poverty, and the impact of balanced budget legislation and rhetoric. All contributors focus on critical pieces of the election and how we as Manitobans understand and experience democracy in 2019. As part of the editorial team, we hope that you find this multi-faceted picture of the 2019 Manitoba election to be a helpful way of better understanding what happened during the election, and the foundation it lays for the Pallister government’s next term.

Karine Levasseur is an Associate Professor in the Department of Political Studies at the University of Manitoba. Her research interests include state-civil society relations, social policy, accountability, and governance. She is the author of “In the Name of Charity: Institutional support and resistance for redefining the meaning of charity in Canada,” which won the J.E. Hodgetts Award for best article (English) published in Canadian Public Administration in 2012.

Andrea Rounce is an Associate Professor in Political Studies at the University of Manitoba. Emphasizing the need to bridge theory and practice in her work, Andrea’s research includes projects on government’s use of public opinion and consultation, public sector ethics and values, public servants’ political activities, relationships between the voluntary sector and governments, and end-of-life care.