The Conversation: How an NHL street party caused a social media storm about racism

The following article from Lori Wilkinson, professor of sociology at the University of Manitoba, was published on The Conversation:

As the city of Winnipeg was preparing to host a large celebration to mark the beginning of the National Hockey League playoffs for its team, the Jets, a storm broke out over social media over a headline about the hockey street party.

A story that described the preparations for the outdoor public celebration during the playoff game in the Winnipeg Free Press included this headline: “Jets parties will turn downtown white again.” The original story ran with a photo of four men wearing all-white, hooded costumes. Both the headline and photo were later changed.

Soon after, Black Space Winnipeg, an anti-racism advocacy group, tweeted a response to the article and posted a comment on its Facebook page. The group implied the words “white again,” along with the photo, would make racialized people feel unwelcome in the city. The group also suggested in a Facebook post the name of the playoff party (“Whiteout”) be changed.

“Have a look at these photos from past Jets pandemonium/fan appreciation. The four men wearing all white Jets outfits with pointed hoodies … remind you of anything?”

Many people reading the tweet from Black Space Winnipeg did not take the time to think about the original headline of the article before they hurled back angry, misinformed or racist replies.

Some examples: “Go back to playing basketball and leave hockey alone” and “its (sic) ok to be white,” a slogan made popular by white supremacist groups.

I believe the angry tweets and Facebook comments can be classified into two main complaints: many people felt the term “whiteout” was never intended to be racist and that making that claim is political correctness run amok. 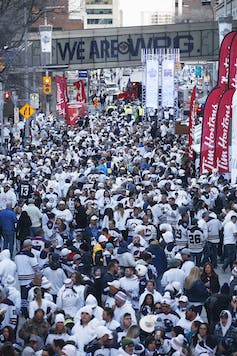 A Winnipeg White Out street party. THE CANADIAN PRESS/John Woods

Words and traditions change because our world is not static. We shouldn’t be afraid to institute change as we become aware of errors made in the past. Decisions made 30 or even 100 years ago have been challenged and changed. Sports have also changed. McGill University recently dropped the name of its sports teams, the Redmen, because as McGill University’s principal said, it is “widely acknowledged as an offensive term for Indigenous peoples, as evidenced by major English dictionaries…we cannot ignore this contemporary understanding.”

She said the name “is not one the university would choose today, and it is not one that McGill should carry forward.”

Last year, the Jets won their first playoff series since the team returned to Winnipeg in 2011, making it all the way to the conference finals. This was a big event for the city. The parties attracted thousands of people to downtown Winnipeg. The crowds were loud and boisterous, but according to media reports, the atmosphere was friendly and a good example of the city’s community spirit in action.

For many Winnipegers, it was a positive image that helped to negate the often stereotypical images many Canadians have about their city as boring, cold as Mars (or hot and full of mosquitoes in summer), or one of Canada’s most violent communities.

“The whiteout” is a nickname for Jets street parties originated three decades ago. According to the CBC, the parties started as a response to the Calgary Flames’ “Sea of Red” during the 1987 playoffs. That was at a time when the Jets home colours were white, not blue as they now are, but the tradition has stuck. Although the Jets left Winnipeg in 1996, the “whiteout” resumed after the team’s return to the city in 2011.

On the surface, the term “whiteout” seems fairly benign and aptly describes the scene. Photos of the event confirm that it is indeed a sea of white. It looks like a blizzard, a phenomenon that naturally occurs in Manitoba winters.

It’s the second explanation — political correctness run amok — that is the most worrisome.

Many fans dismissed the concerns of Black Space Winnipeg and others, rather than considering why the headline might have been offensive.

To demonstrate how ridiculous they thought the issue was, a few posters submitted ideas like having a white refrigerator makes them a racist.

But the headline, along with the photo of men in white hoods, can be interpreted as “only whites are welcome” message. The intention of the message may be innocent, but the way it is understood by the people will depend on their social location.

In a city where racism often rears its ugly head, it is understandable that the seemingly innocuous headline can be understood to be threatening — especially by people who experience discrimination.

Black Space Winnipeg and other social activist organizations are asking Canadians to have conversations about race and to think about how we use language and how the way we label things and visualize them can unintentionally include and exclude groups of people.

Our current social climate in Canada, and in Winnipeg, has given space to more explicit expressions of racism, and therefore we — and our media outlets — need to think about the ways we use language and how that language may perpetuate bias.

Department of Sociology and Criminology, Faculty of Arts, racism, Research and International, sports, The Conversation