Brittanie Parisien, who is in her fourth season with the University of Manitoba Bison women’s basketball team, took part in SWISH sessions when she was growing up.

SWISH gives inner-city kids a place to play basketball in a supervised setting every Saturday throughout the summer. Parking lot E on the Bannatyne campus is converted into basketball courts and the free-drop-in run by the Rady Faculty of Health Sciences Office of Community Engagement is staffed by U of M Bison and community basketball players, and former SWISH participants.

One of those university players is Brittanie Parisien. She’s in her fourth season with the University of Manitoba Bison women’s basketball team and she took part in SWISH sessions when she was growing up. The six-hour drop-in gave her a place to play basketball during the summer break and receive valuable tips from the student-athlete staff members. 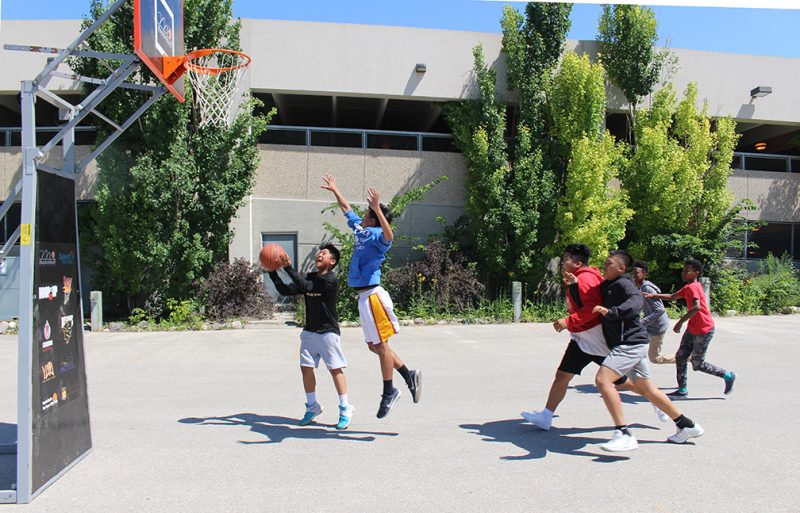 Basketball takes over parking lot E on the Bannatyne campus during the summer.

“I was so happy to start working here,” said Parisien, who is in her second year as a SWISH staff member. “I can tell these kids that I played out here just like them, and now I play for a university team.”

Binh Nguyen is another SWISH staff member who went from shooting hoops in parking lot E to playing at a much higher level. He’s entering his second season with the Canadian Mennonite University (CMU) Blazers men’s basketball team.

Binh said he was taught a lot by the staff members when he was a kid. “I learned that the main thing is to work hard,” said Nguyen, a psychology student. “The way to get better is to work hard.”

One of the staff members who helped instill that work ethic in Nguyen is Xavier Smith. The former Bison men’s basketball player (from 2011-2013) is now the coordinator of the SWISH program. He started as a staff member when SWISH began in 2012.

“SWISH is a safe place not only to play basketball but to interact with positive people like Brittanie and Binh, and learn how they got to where they are right now,” Smith said. “I think that’s huge for the kids.” 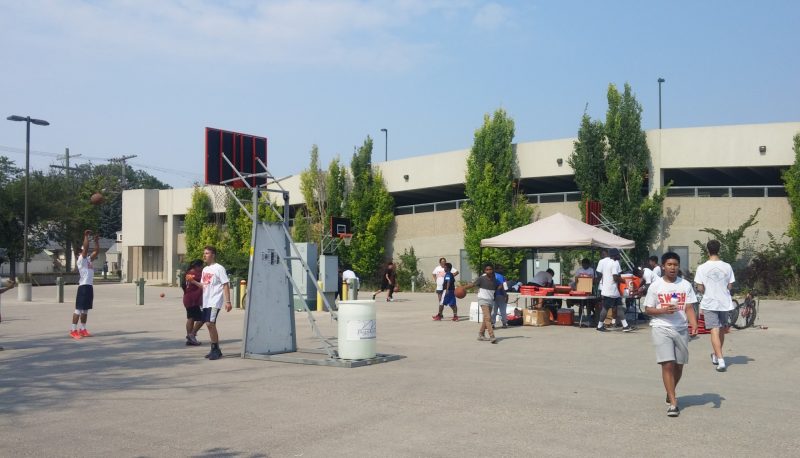 The six-hour drop-in takes place on Saturdays in July and August.

“Binh went to my high school and he came to SWISH regularly,” she said. “Seeing him play for CMU now is really encouraging for myself because I’m going into university soon. And Brittanie used to go to Garden City and now plays for U of M so it’s nice to have people around you like that to show you where to go and how to get there.”

“In the beginning, when it was a new program, we weren’t sure of the impact SWISH would have,” Cook said. “Then eight seasons later, to see kids going on to play university basketball, it is super rewarding to know they’ve stayed with the program and I think that speaks to the level of impact we’ve had on some of these kids’ lives.”

The program ran Saturdays in July and August. On average, 35 kids showed up to shoot hoops each session this summer, which Smith said is five more kids at each drop-in than last year. “I think that’s amazing,” Smith said. “It’s telling us that people are talking and the word is getting around.”

SWISH partners include Basketball Manitoba, City of Winnipeg, Faculty of Kinesiology and Recreation Management, Joe Doupe Recreation Centre, U of M Parking Services, U of M Security Services and U of M Physical Plant.