Researchers at the University of Manitoba (UM) have shared the results from the 2020 Prairie Cover Crop Survey which capture a snapshot of the use and grower observations of this new practice. The report suggests that cover crops are becoming established in the Prairies and can be grown in a wide range of locations and environments across Manitoba, Saskatchewan and Alberta.

Accessing local information about cover crops has been a hurdle for Prairie farmers interested in adopting this production method which holds the potential to build soil health and store carbon in soils.

To help fill these knowledge gaps the 2020 Prairie Cover Crop Survey was developed to provide information to farmers, agronomists, researchers, policy makers, and government organizations that will play an important role in the future of cover crops in the region. 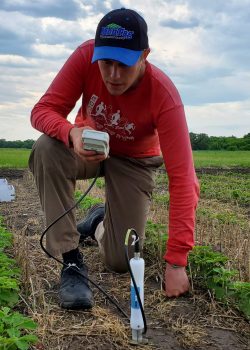 Between October 2020 and April 2021, Dr. Yvonne Lawley and graduate student Callum Morrison from the Department of Plant Science at UM asked farmers questions about how their farm utilized cover crops in 2020, such as how cover crops were grown, their agronomy, the benefits and the problems farmers have experienced. Respondents were also asked about what could be done to support those using cover crops as well as questions to characterize farm types and size.

“It is an important time to hear from farmers about their needs for research and knowledge transfer,” said Callum Morrison. “Farmers want to know how to use cover crops to meet their goals. Policy makers and extension providers want information to best assist farmers and design policy to reach environmental targets.”

In total, the survey collected responses from 281 early adopters who grew a cover crop in 2020. These farms, which were from every major agricultural region of the Prairies, grew 102,539 acres of cover crops. Of the respondents, 31% were from Alberta, 32% from Saskatchewan and 37% from Manitoba.

“As early adopters of cover cropping on the Prairies, we’ve found it to be a bit of a lonely pursuit,” said Kevin Nickle, survey respondent and grain farmer in the Red River Valley of Manitoba.  “This survey demonstrates that there is widespread participation and a general desire to continue. There is so much to learn in this realm and this survey may help inform researchers and practitioners on the specific questions to ask.”

“Although I had not yet used cover crops at the time of this study, I am encouraged by the uptake of the practice, and have now planted fall rye as a trial on some of our acres and may be used for spring grazing. We are also able to purchase a no-till drill this fall and look forward to the possibilities,” said a survey respondent.

The research team partnered with a number of farm organizations and individuals in sharing the survey widely. 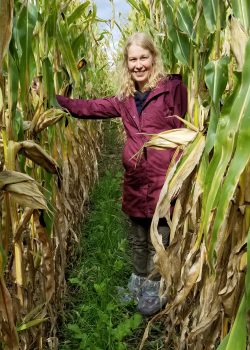 “We must thank all those who took the time to call their neighbour, send an email, add the survey notice a newsletter, published a story, or retweeted a post,” said Yvonne Lawley. “It was exciting to experience the strength of networks in the agricultural community throughout this project.”

Funding for this project was provided by General Mills and Manitoba Agriculture and Resource Development through the Manitoba Ag Action Program.

The report can be accessed at the University of Manitoba Agriculture & Food Knowledge Exchange website: https://umanitoba.ca/agricultural-food-sciences/make/make-ag-food-resources#crops.

What are cover crops?

A cover crop is grown to cover the soil, at times when the soil would otherwise be left bare. This mimics natural ecosystems that which have plants continuously growing when the ground is not frozen. For this research focused on the Canadian Prairies, we defined a cover crop as a crop that is planted primarily to provide soil health and other agronomic benefits that is not harvested as a major cash crop. Cover crops that are grazed as annual forage were counted as a cover crop in our definition.

Cover crops take two main forms in the Canadian Prairies. The first being grown to provide cover during the shoulder season between cash crop harvest and the planting of the next cash crop. These cover crops are commonly seeded after cash crop harvest in the fall. However, they may also be established as an intercrop at any time during the lifecycle of the cash crop. Cover crops can also take the form of a full season cover crop, where a cover crop is grown to provide soil cover over a full growing season, either in the place of a cash crop, or in between rows of perennial crops. Farmers may grow a full season cover crop after an extreme weather event has destroyed a cash crop, to manage problem soils (such as salinity), to replace summer fallow, for green manure, or as an annual forage source in a grazing system.

Why are cover crops important?

Maintaining groundcover year-round provides greater protection from soil and wind erosion and provides food for soil microbes during periods when they may otherwise have been left ‘hungry’. Plants capture solar energy and fix carbon from the atmosphere that can be returned to the soil, building soil organic matter. This increase in soil organic matter alongside the presence of cover crop roots can assist in the building of stable soil aggregates and increase soil structure and water infiltration.

It is hypothesized that cover crops could play a role in increasing the profitability and resiliency of Prairie farms by increasing yield, nutrient cycling, and water use efficiency. Cover crops may also play a role in nutrient management by reducing fertilizer costs when using legumes that fix nitrogen, or by growing cover crops that can scavenge excess nitrogen left in the soil after cash crop harvest that may otherwise be lost. Cover crops may also provide another ‘tool’ for tackling weed, pest, and disease pressures, especially at a time of increasing resistance to crop control products.

Who responded and where were they from?

In total, 281 early adopters took part that grew a cover crop in 2020. These farms grew 102,539 acres of cover crops. Farms were from every major agricultural region of the prairies. This highlights that cover crops are becoming established in the Prairies and it is possible to grow cover crops in a wide range of locations and environments across the three Prairie Provinces. 31% of respondents were from Alberta, 32% from Saskatchewan and 37% from Manitoba.

The survey revealed that 81% of farms that responded have observed at least one benefit from growing cover crops, with the most common benefit, improved soil health, being experienced by 54% of farms. Most farms (71%) identified that they had observed benefits within three years of growing cover crops.

Despite these benefits, the survey also identified common challenges that farms faced when adopting cover crops. The most commonly observed problems were related to the prairie climate, with 30% experiencing problems with the short growing season, and 27% having problems with cover crop establishment due to the lack of moisture in the fall.

What would enable cover crop use

Survey responses indicate that financial incentives may be the most effective method for enabling farms that responded to continue using cover crops or even to increase their acres. These incentives could include payments for storing carbon (59%) and tax credits for planting cover crops (55%). Similarly, 38% of farms that responded indicated that payments from conservation or watershed groups would enable increased cover crop use. Greater access to information, more scientific research, and technical assistance was also identified as a need to increasing cover crop adoption on the Prairies.

How to reference this report

All interested in cover cropping on the prairies are invited to attend a Webinar hosted by Manitoba Beef and Forage Initiatives (MBFI) at 7pm CST, 8pm MST on Wednesday the 3rd of November. Participation is free and registration for the event takes place at: https://www.mbfi.ca/registration/cover-cropping-on-the-canadian-prairies-webinar

Callum Morrison is a graduate student at the University of Manitoba specializing in cover cropping on The Canadian Prairies. Originally from Scotland, Callum is now living in the Red River Valley of Manitoba. Callum has thoroughly enjoyed the 2020 Prairie Cover Crop Survey journey, especially working alongside organizations, and most importantly, connecting with the farmers themselves.

Dr Yvonne Lawley is a professor at the University of Manitoba. Her area of research is agronomy and cropping systems. Dr. Lawley’s research has focused on several crops including soybeans, corn, and wheat and a range of management practices from residue management, strip tillage, to cover crops. Her research involves both small plot and on-farm field scale agronomy research. Dr. Lawley enjoys communicating the results of her research to a wide range of audiences including farmers, agronomists, scientist in a range of disciplines, and especially in the classrooms where she teaches at the University of Manitoba.

Bruce Campbell, alumnus, honorary degree recipient, friend of the Faculty of Agricultural and Food Sciences, and business leader and philanthropist, died on May 17, 2022.

Meet the recipients of the inaugural Indigenous Doctoral Program Fellowships