A new University of Manitoba scholarship has been established to honour one of the College of Pharmacy’s trailblazing alumni, Lori Fasano.

The Lori Fasano Scholarship, available to College of Pharmacy students entering their second year of the PharmD program, was awarded for the first time at the college’s academic awards ceremony in the fall.

Over Fasano’s 30-year career, she worked and consulted for some of Canada’s largest retail companies, including Safeway, Zellers, Sobeys and Loblaws.

In April 2013, Fasano suffered an anoxic brain injury and has lived with a severe disability since then. Her husband, Dave Fasano, said they decided to establish the scholarship as a way of giving back.

“Between 2013 and 2018, we had a lot of people do a lot of things to help support us in what we needed to do to look after Lori and the cost of her care,” said Dave. “Once we were in the position where we were financially sound, we wanted to find a way where we could give back to those that supported us.”

Fasano discovered her passion for the pharmacy profession while working part-time as a cashier at Brown’s Drugstore during high school between classes, running track and playing volleyball, basketball, baseball and field hockey.

When she graduated from Elmwood High School, Fasano was awarded the Governor General’s medal for the highest academic average of her class, but wasn’t sure what she wanted to do career-wise. Her mother suggested that she become a pharmacist since she enjoyed working at Brown’s. She graduated in 1982 with a bachelor of science in pharmacy from the U of M.

In 1997, Fasano and her family moved to Mississauga, Ont., when Dave accepted a job there. She became assistant director at Zellers, responsible for pharmacies in Manitoba and Saskatchewan, then in 2002, joined Sobeys as business manager for pharmacy for Ontario and western Canada.

In 2007, Fasano returned to Zellers as the general manager of pharmacy for Hudson’s Bay Corporation. She oversaw 265 Zellers and Bay pharmacies across the country and held that position until Hudson’s Bay sold Zellers to Target.

At this point in her successful career, Fasano established her own business as an independent consultant. She was hired to work on behalf of Galen Weston and was a key influence in Loblaws’ decision to buy Shoppers Drug Mart.

The Fasanos ultimately decided to establish the scholarship at their alma mater, the U of M, because it was not only a place of education, but where they met and fell in love. Fasano met Dave, a physical education major, in 1979 in a physiology course and they married in 1983.

“That was the driving force in terms of how we wanted to be able to give back. A good way of doing it was to create a scholarship, because it will be ongoing recognition of what Lori achieved in her career in the field of pharmacy. She was one of the leading professionals in Canadian retail pharmacy,” Dave said. 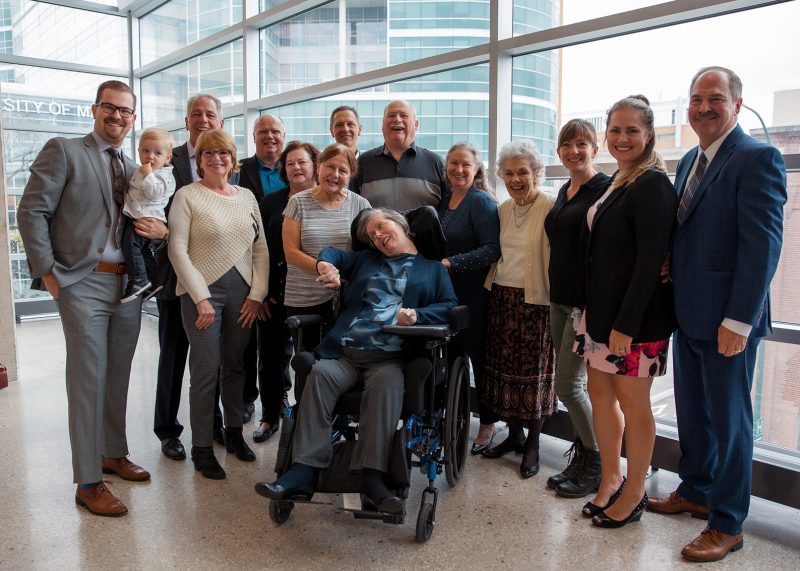 Lori Fasano (centre) with family at the College of Pharmacy’s academic award ceremony. Her children, Scott (far left) and Alison (second from right) and husband Dave (far right) were also in attendance.

“We are grateful to the Fasanos for establishing this scholarship that so appropriately honours Lori’s leadership in Canada’s community pharmacies, and for sharing her passion for the profession with today’s outstanding College of Pharmacy students,” said Dr. Lalitha Raman-Wilms, dean, College of Pharmacy, Rady Faculty of Health Sciences.

The first recipient of the scholarship was Sabina Ozog. Lori and Dave Fasano and their children, Alison and Scott, travelled from Mississauga to Winnipeg to present the award in person at the ceremony held on Oct. 4 at the College of Pharmacy.