The Province of Manitoba, with the support of the Eden family, will be establishing a $60 thousand memorial scholarship fund at the University of Manitoba in memory of Ruth Eden to support female-identifying students studying Civil Engineering.

Minister of Transportation and Infrastructure Doyle Piwniuk announced the scholarship on Tuesday, November 8, 2022 at the Price Faculty of Engineering.

Ruth Eden was the first woman hired by the province in 1988 to work as an engineer and was a member of the 30 by 30 Task Force, which works to increase the representation of women within engineering. She was one of five women to graduate from the civil engineering program at the UM in 1988, going on to earn a master’s of structural engineering in 2002. Shortly after graduation she joined the former Department of Manitoba Infrastructure and was involved in the design and construction of bridges and structures throughout the province. As a mentor and a leader, Ruth served as the president of Engineers Geoscientists Manitoba in 2018. Ruth was the assistant deputy minister of the former Department of Infrastructure’s Technical Services and Operations division, and was widely considered as a leader and mentor in the field of Civil Engineering. 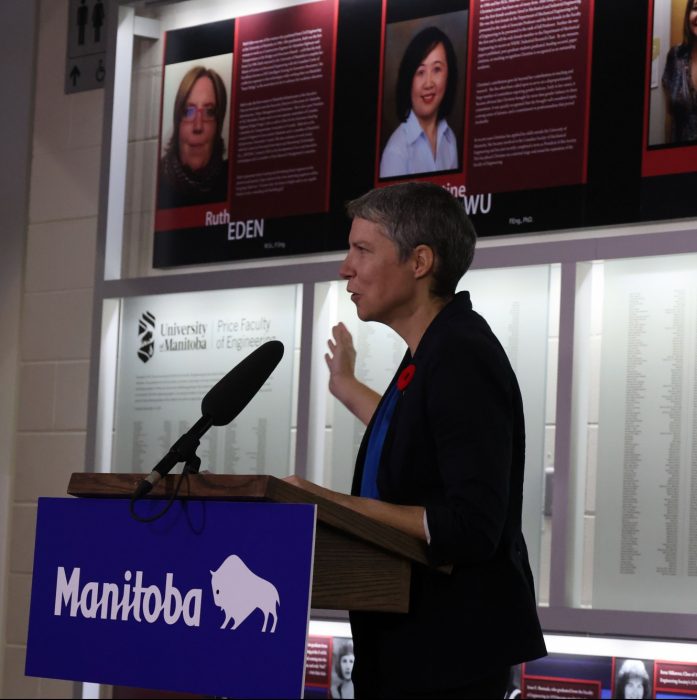 “The Price Faculty of Engineering is so pleased to have the opportunity to host the announcement of a future scholarship to honour Ruth Eden,” said Dr. Marcia Friesen, Dean of the Price Faculty of Engineering. “It feels like I’ve always known Ruth Eden’s name in the engineering community, and it was always through encounters and by reputation that highlighted her positive and pragmatic nature.  She graduated and built a career at a time that was often defined by “first woman to…” and “one of only five women to…”  And yet, Ruth always approached the profession with a sense of ownership and place that led to her extensive accomplishments.  A future scholarship is such a fitting extension of this sense of ownership and place, creating opportunities for more students to follow in her footsteps.”

The scholarships being established will support individuals that identify as female and who are studying civil engineering full-time at the University of Manitoba’s Price Faculty of Engineering. The minister noted that given Ruth’s passion for bridges and water, coursework in these fields will be incorporated into the eligibility criteria.