Third-year students in the respiratory therapy program at the College of Rehabilitation Sciences, Rady Faculty of Health Sciences received active practicing graduate licenses from the Manitoba Association of Registered Respiratory Therapists (MAART) last week after completing their program during the COVID-19 pandemic.

The three-year bachelor’s program admits 16 students each year. Students were scheduled to complete their clinical placements in April, but when the pandemic hit Manitoba in March, many were worried the students would be pulled from those placements to assist in the fight against the virus.

“The pandemic has highlighted the importance of respiratory therapists in critical care, which include functions such as airway management and mechanical ventilation,” said Denise Mackey, head of the college’s respiratory therapy department.

MARRT registrar Shane McDonald said a 45-day active practicing student license policy was developed early on in the pandemic for the purpose of granting students a temporary license to assist if necessary, but thankfully Manitoba’s number of COVID-19 cases was relatively low and the need for respiratory therapy assistance hasn’t been as high as in some other provinces.

“It was fortunate the surge never came,” McDonald said. “The students remained in clinical for a couple of additional weeks after the pandemic started, which afforded them the opportunity to achieve more of the competencies they require for entry to practice. They didn’t get some of the clinical exposure they might have had in a typical experience, but they may have had the opportunity in a supervised learning environment to put into practice some of the isolation precautions and protocols they’ll be using in the future, as all respiratory therapists have the possibility of being exposed to pathogens  throughout their career.”

McDonald noted the students are now eligible to take the MARRT credentialing exam this summer which will result in them being granted full active practicing licenses with the association. 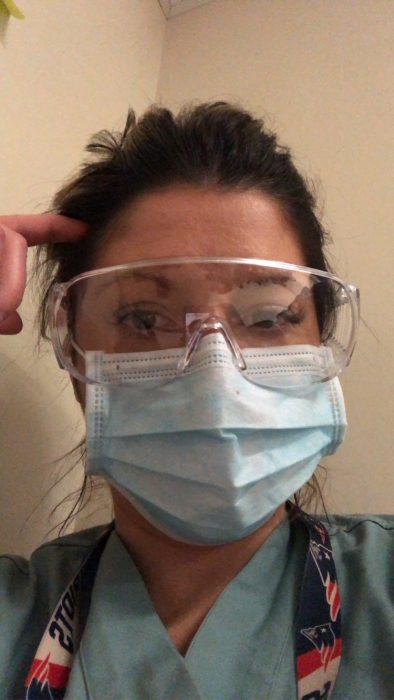 Faculty member Kaitlin King on “hour 11 of 12 wearing a mask and goggles for the day.”

“There are many reasons someone may need a breathing machine, but in the case of something like COVID-19, their body is not getting enough oxygen into the lungs. Respiratory therapists can support the patient’s lungs using a ventilator,” she said. “Basically we inflate the lungs and try to control the carbon dioxide being removed and oxygen going in.”

King, who also works at St. Boniface Hospital, said her day-to-day role has changed significantly since the pandemic hit Manitoba.

“We’re doing a lot more work in the intensive care unit now,” King said. “Unless someone is having a cardiopulmonary arrest or something like that, we’re not doing as much of our hands-on assessing of patients every day because our focus is now on the ICU.”

King graduated from UM’s respiratory therapy program in 2012. She’s worked at St. Boniface Hospital since, including two years as a clinical specialist before coming back to the College of Rehabilitation Sciences as an instructor in September 2019.

“I was doing advanced discharge planning, education, things like that. It was a good transition to teaching because I had done staff education and training patients to use puffers and oxygen at home,” she said.

King said respiratory therapy was an unknown profession to her until a high school career counsellor mentioned it as an option.

“It’s a really exciting career,” she said. “There are some really high adrenaline jobs like the neonatal transport teams where you go to northern communities and transport patients by an air ambulance, and then there’s the more routine care, where you’re doing patient education, pulmonary function testing and things like that. There are a lot of different avenues.”

See below for a ventilator demonstration by King.