The Faculty of Agricultural and Food Sciences mourns the passing of alumnus and former staff member Vern McNair (BSA/51) who died on March 11, 2020. His obituary can be found here.

The following is the profile of Vern McNair which appeared in the Faculty’s centennial publication Times of their lives, published in 2007 and written by Dawn Harris. 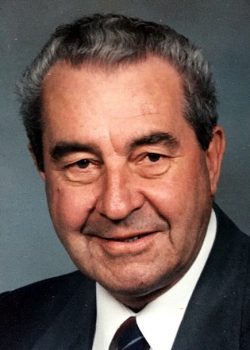 Vern McNair entered the Faculty with full intentions to go back to the farm. “But to my parents’ credit, in third year, they encouraged me to consider working for a while.” He followed their advice and went on to have a very successful career in communications.

Born in 1928 on the family farm at Shoal Lake, Manitoba, he worked for two years on the farm before enrolling in the Faculty. He graduated in 1951 an eventful year for McNair. He became an ag rep in Carberry in May, got married in June and, sadly, lost his parents in a car accident in July.

McNair helped to pioneer farm television in the province, joining the CBC in Winnipeg in 1955. “Television had really just started with Winnipeg’s CBC coming on air in 1954 (as CBWT). “Everything was shot live and in black and white in those days. Video recorders didn’t come in until about 1959, but even then we tried to shoot in one take. All our mistakes went on air.”

At CBC, McNair worked on various projects including Country Calendar, which became Country Canada in about 1970. He worked at the CBC on both television and radio until 1959.

Then McNair joined the Manitoba Department of Agriculture (MDA) to become involved in developing the Department of Information Services. He went on to become chief of Information Services and finally director of Communication Services. In his first year with MDA, McNair was instrumental in launching Country Comment, a radio series produced by the department for country radio stations. Eventually nine stations broadcast the five-minute farm information spots. The service ran for 30 years, winding up when McNair retired in 1989.

During his term with MDA, This Business of Farming was launched – Canada’s first electronic distance education short course for farmers. The first series was produced at the Faculty, as a collaborative effort between the CBC and MDA.

Following the initial success of the department’s radio service, McNair helped launch various television services for the department. This culminated in the development of FarmScene, a weekly television program featuring news and information important to a wide range of farm operations. The show ran through the 70s and 80s on various stations including CKY in Winnipeg, CKX in Brandon and CKOS in Yorkton, Saskatchewan.

McNair took a leave of absence in 1967 /68 to attend Indiana University to get a Masters degree in education (communications).

McNair also played a part in expanding the Faculty’s extension efforts. In 1966, MDA posted a full-time extension/ communications person at the Faculty. Due to budget cuts, this position ended in 1972.

Today McNair looks back at his career in communications and can’t give enough praise to his alma mater for the role it played in his success. “When I enrolled at the Faculty, there was nobody shyer than me. I joined the student council to meet people, and in fourth year, they made me Senior Stick. I was very proud of that. After my student council work, four years in residence, and the many interactions with the great teachers, classmates, and others, I emerged from the Faculty a changed man. I really enjoyed myself; it was a great experience.”

In 1977, his eldest son, Doug, also Senior Stick, graduated with a BSA in agricultural economics; and in 1980, second son Roy, after considerable student council, also graduated with a BSA. His daughter, Lilias, started her ag degree at the Faculty but completed it in Alberta.

“We had never guessed that we would have all three kids in agriculture. One day our daughter came home, about halfway through Grade 12, and announced she was going to take agriculture. Later, when our two sons went in the same direction, we couldn’t have been more pleased.”

Lilias is currently a university lecturer in leadership management; Doug operates McNair Business Development Inc.; and Roy is the manager of commercial accounts with the Canadian Western Bank. “All three claim their ag training has been invaluable in helping them to achieve their goals,” declared McNair.

In his retirement, McNair has written and published two books, A Long Way from Wolfe Creek and A Family Affair, a history of the McNair clan. In retirement he is still involved in communicating with former co-workers. For the past 17 years, McNair has organized and hosted a yearly spring luncheon for MDA retirees. This involves a mailing list of nearly 100. In more recent years, a fall luncheon has also been held for the same group. Once a communicator always a communicator.

The National Centre for Livestock and the Environment (NCLE) has launched a new website that puts a wealth of information at the fingertips of the producers, researchers and other industry stakeholders.

Faculty of Agricultural and Food Sciences, national centre for livestock and the environment, Research and International

The Biosystems Engineering Alumni of Influence Awards recognize those who graduated in both the undergraduate and graduate programs.