Leonard A. Bateman, former chair and chief executive officer of Manitoba Hydro, died Dec. 7 at age 100. Bateman, a member of both the Order of Canada and Order of Manitoba, was responsible for building the first Canadian long-distance direct current (DC) transmission lines, running from Nelson River in northern Manitoba to the southern part of the province.

At the time, they were the world’s longest and highest-voltage DC lines. These connections allow Manitoba Hydro to export renewable energy worth hundreds of millions of dollars annually, and to import energy during times of drought or interruptions to the transmission system from northern Manitoba.

“As an early proponent of renewable energy, Len Bateman was a trailblazing engineer,” said Jonathan Beddoes, Dean, Faculty of Engineering. “His expertise and leadership benefitted the engineering profession nationwide. Additionally, his longstanding support for the Faculty has helped nurture a new generation of talented engineers.” 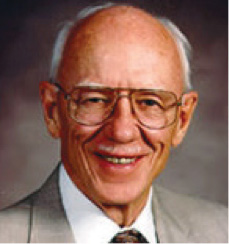 Born in Winnipeg in 1919, Bateman studied electrical engineering at the University of Manitoba, earning a bachelor’s degree in 1942, followed by a Master’s degree in 1948. A medical condition prevented him from serving overseas in the Second World War but did not hinder his career.

Starting as a design engineer at Winnipeg Hydro, in 1956, he joined Manitoba Hydro, where he helped plan a series of dams and hydroelectric power plants on the Nelson River. By advancing hydroelectric power and blocking coal development, Bateman saved untold costs and environmental risks. Bateman led Manitoba Hydro as chair and CEO for six years in the mid-1970s. Following that, he ran a successful private consulting business until retirement.

In recognition of his accomplishments and dedicated service, the profession honoured Bateman with several top honours including the National Gold Medal from the Canadian Council of Professional Engineers.

For 40 years, he supported Engineering students and their learning environments at the University of Manitoba, providing opportunities for an outstanding education.