Toby Le gives his presentation in front of a video camera at the University of Manitoba 3MT final.

Staring into a video camera, Toby Le finished his Three Minute Thesis (3MT) presentation, and the tiny audience of 11 other competitors broke into applause.

The University of Manitoba 3MT final normally takes place in a packed auditorium. Because of the COVID-19 pandemic, this year’s competitors gathered on the Fort Garry campus to livestream the event online to an at-home audience.

When the competition wrapped up on the evening of June 3, 2020, Le, a master’s student in the department of medical microbiology and infectious diseases, Max Rady College of Medicine, was awarded the Dr. Archie McNichol Prize ($2,500) for first place and the People’s Choice Award ($250). 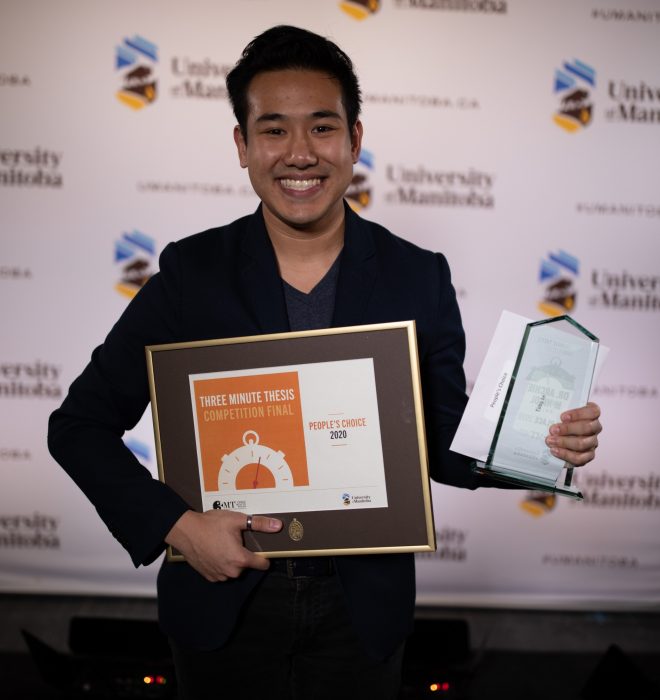 His presentation, titled Understanding the links between DMPA and HIV risk, was a hit.

“I’m honoured and grateful the judges enjoyed my talk,” he said. “I’m speechless.”

The competition was scheduled to take place in March but it was postponed because of the pandemic. It forced Le to change the way he was preparing for the final.

“After the outbreak my whole way of practicing was totally different,” he said.

He went from practicing live in front of people to recording his performances and sending videos to his friends, family and lab members for feedback. He would also practice his talk at the end of his weekly lab meetings that were held over a videoconferencing program.

“I have to thank my lab members who took time out of their busy schedules to help me rehearse every sentence and every word,” he said.

While Le didn’t win his heat in February, he moved on to the final as a wildcard selection. But he wasn’t the only student from the department of medical microbiology and infectious diseases to go into the competition an underdog and emerge in the top three. 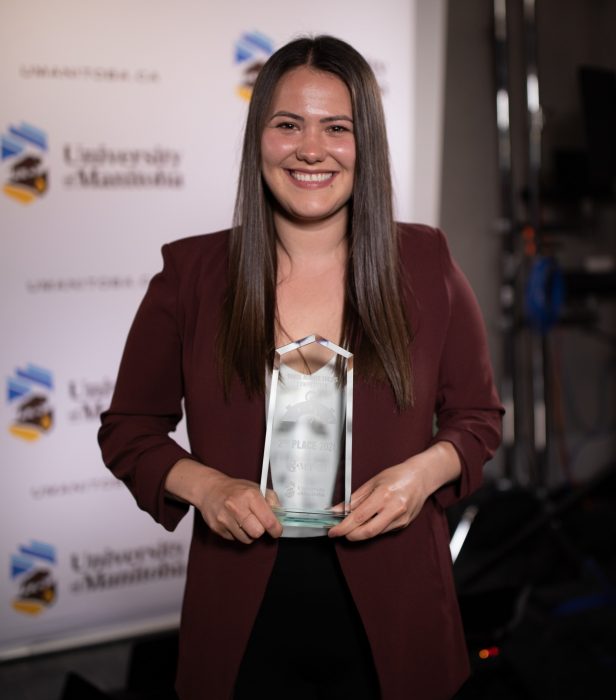 Doctoral student Shanelle Gingras was also a wildcard selection and ended the evening winning the University of Manitoba Association Prize ($1,250) for second place.

“I was shocked when I found out I placed second,” she said. “I stumbled on one word and I thought that took me out of the pool for first, second or third, but I was happily surprised to see I was still able to convey my general message and it resonated with the judges.”

Gingras, whose presentation was titled Safer surfing: The impact of genetics on inflammation and HIV susceptibility, said she practiced wherever she could – from her car to the elliptical to while she was getting ready in the morning.

“I practiced all day, every day,” she said.

Gingras said it was an excellent experience participating in the 3MT competition because it allowed her the chance to share her research with family and friends.

“Sometimes it can be hard in science for those close to you to fully understand what you do in the lab,” she said. “So I think it’s great to be able to communicate my research in this way to them.”

Dr. Keith Fowke, professor and head of medical microbiology and infectious diseases, said that the 3MT competition is an extremely valuable process that helps graduate students develop the important skill of enthusiastically communicating their research to a general audience.

“The department is extremely proud of Toby and Shanelle, and we congratulate them for so eloquently describing their research in Kenya and South Africa, respectively,” Fowke said. “They are two shining examples of the impact of the research UM graduate students are having around the world and we are extremely proud of them.”

Later this year, Le will take part in the 3MT Western Regional competition and compete against students from other universities. While he isn’t sure right now what improvements he’s going to make to his presentation, he knows one thing he’s going to do to for sure.

“I’m going to practice more than I ever have.”