When life happens, the best way to honour those that believe in you is to dig down deep and get it done.

For Peter Pomart [MBA/18], this idea is representative of his academic journey, a path that started with a Bachelor of Science from Brandon University, an Asper MBA degree and his current adventure, the pursuit of a PhD from the Asper School of Business.

Director for the Indigenous Business Education Program (IBEP), Pomart started his career at the University of Manitoba in 2007 working as an Indigenous Student Recruitment Officer and later became Program Coordinator for IBEP. Shortly after he joined IBEP, Pomart was approached by then Asper School of Business Dean Glenn Feltham, who recognized his leadership potential and recommended he pursue more education. Feltham’s encouragement prompted Pomart to start the MBA program in 2011.

While in the program, Pomart faced a set of personal setbacks including his father’s passing after a lengthy and courageous battle with cancer. Just over one year after losing his father, his brother died suddenly, at the start of his final term.

“His passing, ultimately attributable to intergenerational residential school trauma, was quite unexpected. My immediate thoughts were to withdraw from the term before it had even begun,” recalls Pomart. However, his partner encouraged him to take things one day at a time – both at work and school. On his first day back to work, he held regular advisor meetings with many IBEP students who knew nothing of his loss. “Their positivity and commitment to a new term was invigorating and inspired me to reframe the way I approached that term.”

“Although his passing left us with more questions than answers, I know that he was proud of me for pursuing my MBA. Reframing my thoughts this way, I knew that the best way to honour his life was to continue my studies,” says Pomart of his decision.

After completing his MBA in 2018, Pomart applied to the Asper School of Business PhD program, and currently balances this new challenge with his role as IBEP Director along being a father to his 18-month-old daughter Holly.

After completing your MBA and continuing your role as IBEP Director, how decide to pursue a PhD?

Gady (Asper School of Business Dean, Dr. Gady Jacoby) can be persuasive. During one of our regular meetings, Gady asked if I had ever considered academia. I have to say, my first response to him was literally, “Batter up! … Curveball”. At the time of that meeting, Brenda [Robson Hall Law Professor Brenda Gunn] and I had found out we were expecting, with a due date of December 2018. 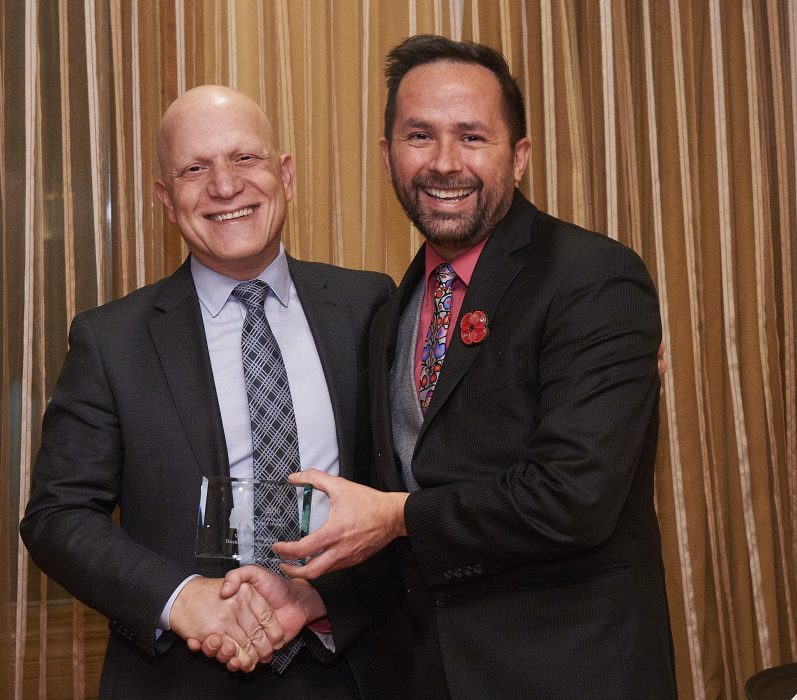 When it comes to education, there’s never a perfect time, but in terms of my ability to be there for the child we were expecting, I felt that there’s no better time to start than when the baby is young. The first year was a lot easier to balance because Holly slept a lot and it was easy for me to write my papers and fulfill my work and school responsibilities without much interruption.

I’ve found this past year has been more difficult, especially in the COVID world in which we live. At times Brenda had to deliver a class in one room while I attended the class in the other. More recently, Brenda and I split our days in two parts by watching Holly while the other is working. We swap responsibilities over lunch.

What is your PhD focused on?

I’m still narrowing that down but I’m looking at contributions Indigenous people make to the economy and how Indigenous values apply to entrepreneurship. There’s a myth that Indigenous people are adverse to business. It’s not the case – we just do business differently. We do business in a way that looks at the world in a holistic and interrelated manner. When I look at the unique way Indigenous peoples do business in Manitoba – it’s about taking care of not only employees, but of communities. Examining sustainability issues, particularly social and environmental issues, Indigenous people’s worldviews naturally lend themselves to social enterprise. The business values revolve around Indigenous ways of relating to other beings as well as relating to the planet, which we do not own but rather steward for future generations.

Another research area in which I am interested relates to the UN Declaration on the Rights of Indigenous Peoples – particularly with the right for Indigenous peoples to provide or withhold Free, Prior, and Informed Consent. Some of Brenda’s research involves FPIC and the Declaration, which is sometimes a topic at the dinner table. Recent events associated with the resistance of the Wet’suwet’en peoples demonstrates that tensions exist that need to be resolved and that businesses have an opportunity to learn how to engage with Indigenous peoples in a good way that affirms their collective human rights.

At the heart of the mismatch between industry and Indigenous peoples is different paradigms with which they approach negotiations. Industry proponents typically wish to obtain consent to move a project forward, whereas Indigenous peoples wish to exercise their collective human rights, which include decision-making over land and resources.