Note on the passing of Elder Stella Blackbird 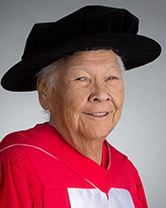 The University of Manitoba community is saddened to hear that Elder Stella Blackbird, LL.D., from Keeseekoowenin Ojibway First Nation, passed away on June 27, 2020.

Known as Red Eagle Woman of the Turtle Clan, Elder Blackbird served as an Elder, Medicine Teacher and Traditional Healer, sharing her vast knowledge with people of all nations from around the world. She received numerous awards, including the Caring Canadian Award from the Governor General, recognizing her philanthropy and dedication to community.

Elder Blackbird received an honorary doctorate from UM in 2015 and remained connected to campus, such as through recent medicine teachings at Migizii Agamik – Bald Eagle Lodge.