The Homecoming Event as part of the Master of Landscape Architecture (MLA) 50th Anniversary was held on the evening of September 23, 2022. After two and a half years of remote celebrations, this event was a reunion in multiple ways; back in person, bonding with former classmates and department members, and linking new and old friendships. Around 100 attendees celebrated 50 years of learning and teaching landscape architecture in Manitoba.

It was a delightfully refreshing and entertaining Friday evening. We gathered in the Court Yard and Centre Space of the Russell Building and hosted a reception, a keynote and other speakers. The series of presenters, including the keynote, connected from various perspectives, to the beginning of the Master of Landscape Architecture program 50 years ago.

Mira (Mimi) Locher, Dean of Architecture, gracefully gave her in-person debut and provided a short overview of the most critical events in the 60ies and 70ies that influenced Canadian design and indirectly prepared the need for a master’s program in landscape architecture at that time.

Tracy Bowman, Director of UM Alumni Relations, emphasized the importance of celebrating achievements by welcoming back alums and former members. Expressing appreciation, she congratulated everyone dedicated to the program on having 440 graduates to date.

Bob Somers, President-Elect of the Canadian Society of Landscape Architects (CSLA), passed greetings from the professional organization and eloquently entertained the audience with stories from the time when he was a student. On behalf of the CSLA, he provided the department with a certificate of recognition for contributing 50 years to landscape architecture.

Meaghan Hunter, President of the Manitoba Association of Landscape Architects (MALA), shared the exciting news that the MALA would donate $5,000 towards the MLA 50th Anniversary Scholarship, a new student recruitment scholarship.

Robert (Bob) Allsopp’s keynote presentation addressed the beginning of the Landscape Architecture Program from the perspective of having been appointed Director of Campus Planning with the academic rank of Associate Professor and teaching the first design studio in landscape architecture. 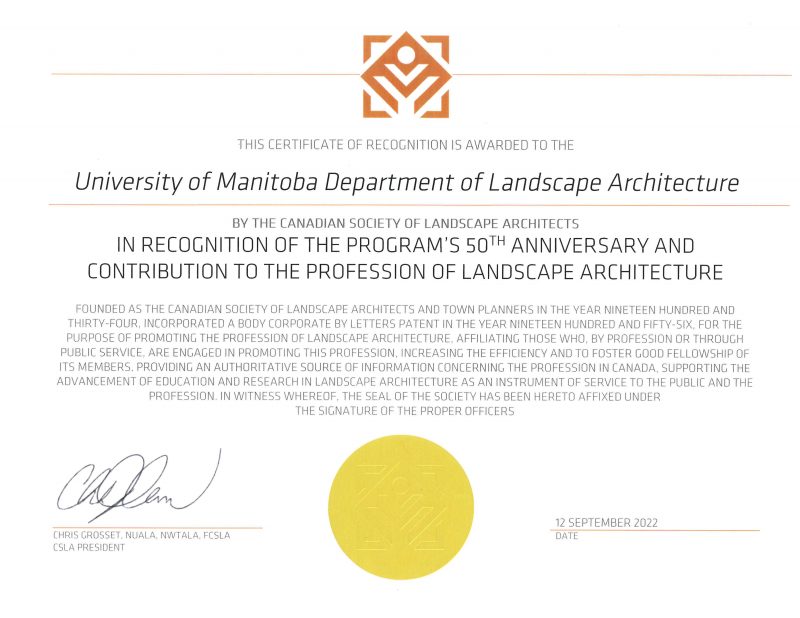 Bob stated that at the program’s start, the “AMBITION was for excellence. THE FINANCIAL RESOURCES were minimal. THE STRATEGY was opportunistic – capitalizing on the goodwill of local, national and international talent – subsidizing budgets by drawing from others’ pockets – maximizing opportunities for hands-on field course experiences. THE TARGET was to help students develop design skills that are sensitive to the specifics of Place within a broad perspective of the natural and cultural worlds. THE RESULT in the early years, … was a very rich program that was as much fun and as educational for the (so-called) ‘teachers’ as it was for the students”.

Charles (Charlie) Thomsen, Professor Emeritus of Landscape Architecture, echoed the keynote’s inspirational report through different stories and shared slides emphasizing the collaborative atmosphere of the early years. “The willingness to collaborate was critical to the department’s success. And the staff was expected to help out with whatever was needed. The human factor was very important, … it was a place we wanted to be.”

Jennifer Moore Rattray, daughter of Alex Rattray, the first department head, provided insights into the family life of Alex Rattray and his dedication to the programs at the Universities of Manitoba and Venice in Italy. She announced the idea of planting a tree on the University of Manitoba campus and having a similar Memorial Tree Planting in Venice sometime next spring.

Alex Boss, LASA president and FASA Chair, voiced the importance of scholarships and the students’ excitement to be part of this anniversary year.

Dietmar Straub, Professor of Landscape Architecture, acted as the evening host and concluded with an entertaining presentation on the Lots of Bulbs project intended to be a catalyst for a pollinators’ party in spring 2023 and a fundraiser for the MLA 50th anniversary student scholarship.

The department provided light snacks, and the attendees stayed longer than anticipated, enjoying the mild evening, the various ongoing slide shows, and the countless stories and memories. The video recording of all speeches in full length can be accessed through the following link.