Keep star athletes in Canada. That’s the motivation behind Tom Stewart’s ongoing contributions to the Eznet Women’s Soccer Scholarship, a patriotic mission he hopes other small business and philanthropists will join.

Every year many talented Canadian athletes leave the country on soccer scholarships to U.S. colleges and universities, rather than stay in Canada. For proof, look no further than the Canadian Women’s Soccer National team, whose current roster boasts only one player who trained and studied at home: former Bison and all-star defender, Desiree Scott.

But Scott’s journey is the exception, not the rule – a fact Stewart knows only too well. Both his daughters went to Alabama to pursue university-level soccer after high school, in part due to a lack of substantial financial support from Canadian post-secondaries.

In 2016, Stewart and his wife Lynne donated $10,000 to create a scholarship fund that would attract players to the Bisons, keeping Canadian talent in Canada. 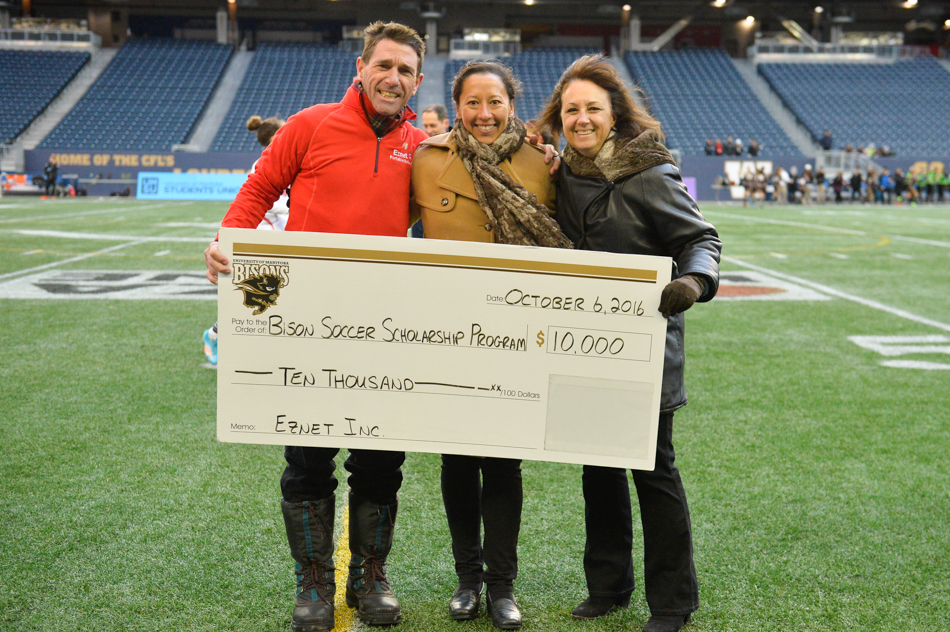 “The main reason is because there’s also a brain drain that happens when our Canadian athletes go to the US,” explains Stewart. “Often, they meet their partners, put down roots, and stay there. I personally know two women who got scholarships to Princeton and are now high profile lawyers in Florida. Our daughter earned her PhD and became a cancer research scientist in New Jersey. These are intelligent people, and when we lose them as athletes, we also lose their brains, personality and vibrancy. We need to do a better job of keeping our top talent in Canada.”

So far, 17 students have benefited from the fund started by the Stewarts, including Bison Jessica Tsai.“For quite a few years, I considered leaving home to play university-level soccer,” she says. “The biggest reason I chose UM was for the convenience of being able to stay at home while pursuing an education and continuing to play soccer. It meant I could have my family in the stands continue to cheer me on at all our home games, like they had been throughout all my years of youth soccer.”

The second-year midfielder has thrived at home. Tsai was recently named the 2019-20 Bisons female Rookie of the Year and is the second Bison named to the U SPORTS All-Rookie team.

“Joining the Bisons soccer program was incredible beyond all expectations,” she says. “They create such a high-energy environment that balances fun with hard work. I feel like the best version of myself when I’m with my team and my love for the game has only grown because of them.”

Tsai is currently enrolled in the faculty of science with plans of pursuing a degree in either general mathematics or actuarial mathematics. She credits receiving the soccer scholarship with helping her succeed both academically and athletically, explaining:

“Balancing school and sports, especially in your first year of university is always challenging. The added stress of tuition and costs makes it no easier. Knowing I have support from not only my soccer program, but donors such as Tom and Lynne, is motivating for me both on the pitch and in the classroom.”

Stewart is the founder of Eznet, a portable sport net used by many pro and post-secondary teams including the Bisons.

What initially began as a business deal with head coach Vanessa Martinez-Lagunas almost immediately convinced Stewart that UM’s soccer program had the quality and calibre to support top Canadian athletes.

“We were awestruck by coach Vanessa: her skill set, credentials, interaction with the girls, and plans for the future. We knew she would help grow the cause of small businesses contributing to keep Canadian athletes at home.”

Recently, the Eznet Women’s Soccer Scholarship got a $20,000 boost from the late Kent Dixon, a renowned Ontario businessman and football coach who also supported Stewart’s dream of retaining Canadian athletes.

“When he understood it could affect people’s lives, that’s what got him,” said Stewart. “I hope other small businesses will come to see it that way, too. I would love to see scholarships like these in all universities across Canada.”

Tsai agrees. “It inspires us – not only as athletes, but also as students – to keep pushing ourselves to become better, knowing we have the support of other communities standing behind us.”

Whether it’s problems from the pandemic, rising grocery prices, or the Christmas cost crunch, basic food needs should never be a barrier to success – an issue the UM Food Bank has been helping to address for decades now