Karen Sigurdson reveals the genius of the Métis jig

DFOM graduate Karen Sigurdson explores the fascinating complexity of Métis jigging in her reasearch project on music and movement.

Music theory is more than just studying music. Among their many contributions to society, musicologists can uncover secrets about music’s origins, revive neglected or forgotten music, and help to make connections between pieces of music larger role in history and society.

In order to dissect and highlight the power of music, students need a solid academic foundation, one which they receive, in spades in the Desautels Faculty of Music.

In her music theory topics course “Analytical Approaches to Rhythm, Metre, and Dance” (MUSC 3830), assistant professor Rebecca Simpson-Litke teaches students methods by which they can study and evaluate the relationship between movement and music.

“I had my students do projects on a movement-based art form of their choice,” says Simpson-Litke of her student’s work this year.

“Part of their project was to create a poster that would represent their analysis and transcription of that art form in a way that could be displayed for passersby to see,” she adds.

Her students spent winter term studying, designing, and then presenting their own music research, which culminated in a verbal presentation explaining their methods.

However, due to the early end of the year to the closure of physical spaces due to COVID-19, the students’ meticulously-research poster projects were not able to be viewed by those in the faculty.

For Karen Sigurdson, the project helped her to pay homage to her home province, her family, and help to document and preserve Metis art forms.

“I chose to research Métis jigging because it originated in the Red River area, and is therefore a part of local history,” Sigurdson says.

“Most of the music that I studied throughout my Bachelor of Music degree was from the European art music tradition, so I was interested in learning about a musical tradition that is much closer to home,” says Sigurdson.

The project also held a personal connection for Sigurdson.

“Jigging is also a part of my own history because my grandma’s father was a Métis fiddler. She often tells stories about her family gathering to make music and dance in their home. I was glad to be researching a tradition that is such an important part of my grandma’s childhood,” she says.

Like the history of Manitoba itself, the Métis jig finds its origins in multiple different cultures.

“It is a blend of various styles of dance, including highland dancing from Scotland, square dancing from England and France, and Indigenous dancing,” says Sigurdson.

Fiddling, which provides the melody for traditional jigging, can be traced back to the very first interactions between the original Indigenous inhabitants and European settlers in the 18th century. The instrument was very quickly absorbed into the Métis musical tradition.

“Fiddling and jigging have been passed through generations orally, making it difficult to find many written records of historical or musical aspects of these Métis musical traditions,” Sigurdson says.

As a starting point for her project, Sigurdson decided to focus on the song that has become a central part of the Métis culture.

“The most well-known jig is called the ‘Red River Jig’, is a variation of a Scottish tune called ‘Big John McNeil’, and is closely linked to a French-Canadian tune called “La Grande Gigue Simple,” says Sigurdson of her choice.

Her impressive work will certainly add to the literature on the subject!

Designing a system of notation

“Due to the oral transmission of the fiddling tradition, there doesn’t seem to be a single version of the ‘Red River Jig’ agreed upon by all players,” says Sigurdson of the challenges involved in scoring the piece.

“Fiddling also involves a considerable amount of virtuosity, so improvisation and ornamentation have influenced the performance of the ‘Red River Jig,’” she adds.

In order to score the piece, Sigurdson focused on the musical elements that are shared by virtually all versions of the song.

“Generally, the ‘Red River Jig’ has an A section in a triple meter and a B section in a duple meter, both of which are usually a regular length – either eight or sixteen bars,” she says.

To form a comparison between song and choreography, Sigurdson sought inspiration in a contemporary group that has become well-known in Canada.

Sagkeeng’s Finest is a Métis jigging ensemble that rose to prominence after winning the Canada’s Got Talent competition in 2012. The group, composed of Brandon Courchene, Dallas Courchene, and Vince O’Laney, is known for their perfectly synchronized, fast-paced dancing, as well as their impressive ability to break – mid-choreography – into improvised dance moves without missing a beat.

Sigurdson analyzed a video of the group performing the “Red River Jig” at the 2013 Gathering Our Voices Indigenous youth leadership training conference.

“I had to play the YouTube video at 0.5 or 0.25 speed in order to grasp the choreography and transcribe the fiddle melody!” she says of the need to slow things down in order to catch all of the intricacies contained in the video.

“Sagkeeng’s Finest use a variety of different steps, but their routine begins with some basic steps for the first few repetitions of the A and B sections,” says Sigurdson.

The genius of Sagkeeng’s Finest is that the group and their accompanying fiddler regularly alternate between two different metres. Although the viewer and listener might not be consciously aware of this change, it certainly subconsciously adds to awe that audiences feel while watching the performance.

“This version somewhat metrically complex, with irregular phrase lengths and changing meter,” Sigurdson says, before expounding on the specific details.

“The A Section of the piece is where a lot of this complexity occurs. Rather than being in a triple meter as expected, the section is mostly in 2/2, with a few bars of 3/2 throughout. The 3/2 bars give the fiddle melody a lilting quality, and a feeling that there is an extra half bar, or a half bar missing,” she explains.

“The fiddle melody seems to divide into phrases of either six or eight quarter note beats, indicated by phrase markings above the bars. The dancers stick to the basic dance step throughout the entire first A Section and B Section without straying. This means that, while the fiddle moves to 3/2 in the A section, the dancers continue with their steps in 2/2, resulting in a disconnect between fiddle and dancers,” she adds.

“This doesn’t last long, however, because another 3/2 bar corrects the disruption and brings the fiddle and dancers back in sync in time for the B section. The entire B section is made up of two-bar phrases in the fiddle, so the dancers stay in sync with the fiddle the entire time. This is followed by an A’ section that is nearly identical to the A Section,” Sigurdson says. 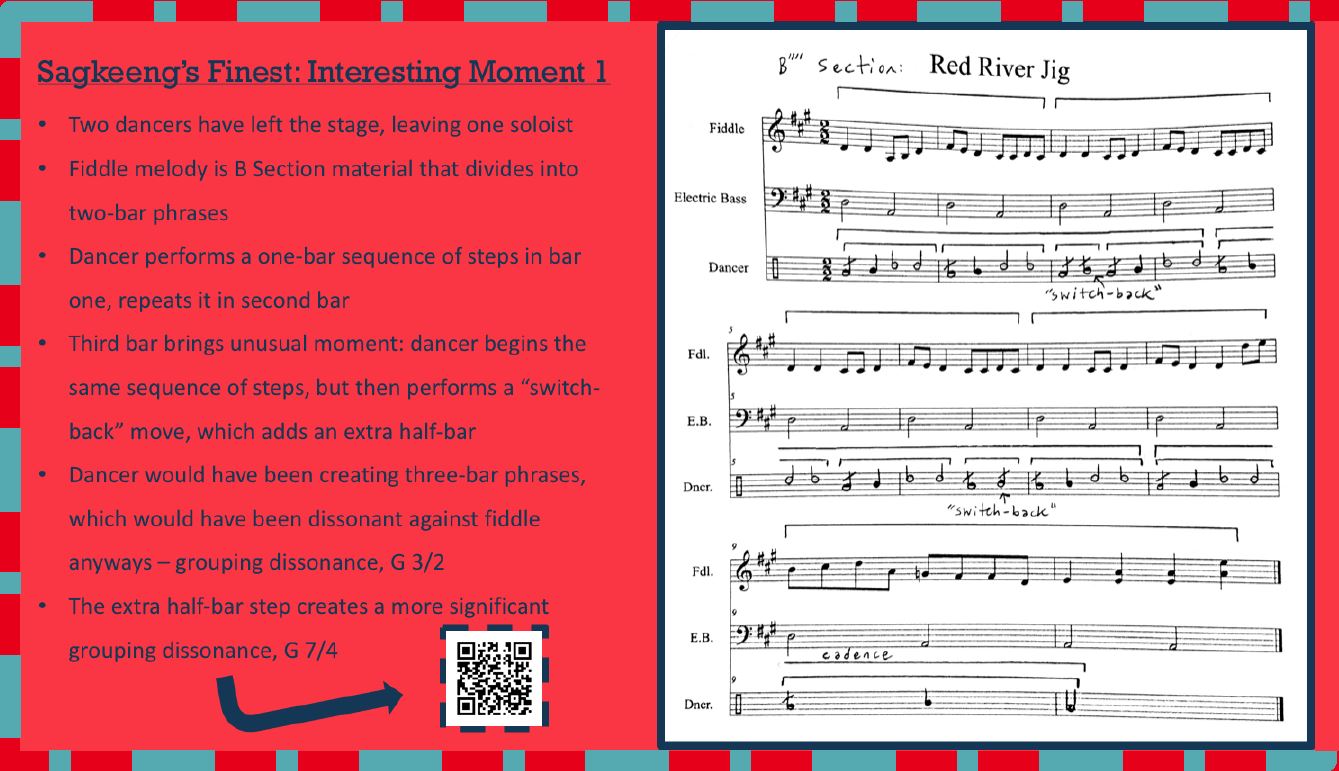 Improvisation – both choreographically and instrumentally – is central to Metis jigging, and performers regularly make use of impressively smooth improvisation. Sigurdson noted that from this perspective, there were some interesting moments within the Gathering Our Voices performance.

“The first soloist [Vince O’Laney] has an interesting moment in the B section of his solo, which features the same two-bar phrases in the fiddle from as the B section near the beginning of the tune,” says Sigurdson.

“The dancer begins a longer sequence of steps that creates a [metrical] dissonance,” Sigurdson says.

Metrical dissonance occurs when two different layers of music or choreography do not occur together on the same beat, even though the overall effect still produces a sense of fluidity of movement and beat.

“O’Laney performs a four-beat pattern that involves crossing his right foot behind his left and tapping the right toe, then stepping out with his right foot, then kicking once with each foot. This sequence is repeated on the left side in the second bar,” she says.

O’Laney’s improvisation lasts about 30 seconds, but the amount of skill needed in order to improvise, stay aligned with the music, break from the metre, and then find a way to bring himself back into the music’s stream to prepare to hand off the solo to the next performer [Dallas Courchene] is astounding.

“The third bar brings the irregularity – it begins the same way, with the right foot crossing behind the left leg and toe-tapping, but there is a switch-back move where the legs stay crossed and he taps his left toes – and then right toes again – and then continues with the sequence. Without this switch-back move, the dancer’s phrase would last three bars and would therefore create a G3/2 dissonance with the fiddle, but the addition of that move creates a G7/4 dissonance. This dissonance lasts for seven bars and then the dance step is modified – the dancer slows down his steps approaching the cadential point in the music and ends his solo with a two-foot stomp,” says Sigurdson of the impressive improvisational dance moves.

Once all three dancers complete their respective improvisational solos – all of which are a jaw-dropping joy to watch – Sigurdson notes that the dancers and fiddler create a fascinating musical moment that creates another metrical dissonance.

“The dancers begin this section by performing three bars of the dance steps from the previous section, and then they begin a new sequence of steps in the fourth bar,” Sigurdson says.

“This sequence of steps can also be grouped into two-bar phrases, but it begins either one bar too late or one bar to early, creating a D (2+1) dissonance. After the two two-bar dance phrases, the dancers perform one bar of cadential-type steps that line up with the syncopation in the fiddle, and then they move on to their next phrase,” she explains.
“The final phrase in the fiddle is irregular on its own because it lasts for an extra beat. This extra beat functions well at this moment because it allows some extra time for the dancers to sync up with the fiddle and cadence together,” she says of the way the musician and dancers work together to create a seamless effect.

Sigurdson’s project on Metis jigging shows the importance of improvisation, and also the high level of skill required to give the illusion of an effortless performance.

“Both the fiddle player and the dancers are very skilled, so they are able to navigate dissonances as they arise by adjusting phrase lengths or lengths of gestures,” she says of the relationship between the performers.

Sigurdson is grateful for her education in music theory during her time in the faculty.

“Throughout my degree, music theory became a strong area of interest for me,” she says.

“I was also hired to grade for the first-year music theory courses this past year, which was a great experience. Although I don’t plan to pursue a career as a French horn player or a music theorist [Sigurdson is considering pursuing a career in psychology], I will always have a strong appreciation for both fields!” she says of her academic work.

While Metis jigging has not been analyzed or studied at length, Sigurdson also hopes that researchers who come after her will add to the literature, and that her work inspires people to view Métis jigging in a reverential way.

“I hope that those who view my poster appreciate the complexity and virtuosity of Métis jigging,” she says.

“The Métis jigging tradition is a rich part of Manitoba’s history, and has many interesting musical elements that are ripe for study,” she adds.

Well done, Karen! This is fascinating research into a beloved tradition that we hope people around the world will explore and appreciate!